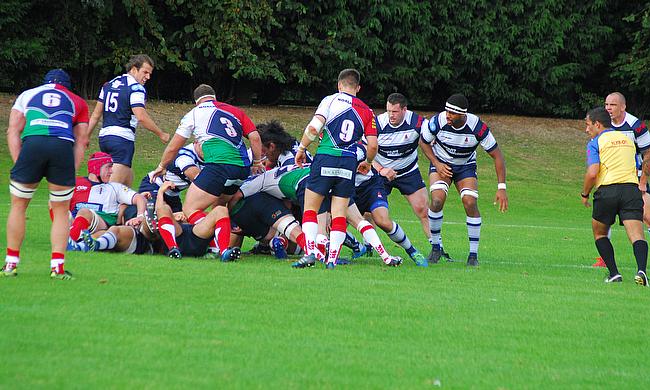 Hull Ionians produced an excellent performance against Plymouth Albion to stay on track in their battle for survival in National One.

The I’s were looking to stay above the drop and an eighth home triumph of the campaign means they are now four points clear of the relegation zone.

The Yorkshire club may have thought victory over Albion would move them further away from the trapdoor, but victories for rivals Loughborough Students and Old Albanian have kept the pressure on.

Students’ win over Esher means the Surrey-based side are not safe just yet while Rosslyn Park produced a strong display in defeat against league leaders Coventry.

Elsewhere in Round 27, Darlington Mowden Park took another step towards second place with a win away at Ampthill and District while Blackheath moved fourth and Old Elthamians and Bishop’s Stortford continued their excellent campaigns.

Coventry ensured their momentum continued following their promotion to the Championship as they edged a tight contest against Rosslyn Park.

Max Trimble and Scott Tolmie helped Cov into the lead, but Park hit back through a Charlie Amesbury brace.

“We got the bonus point and scored some good tries, but it wasn’t a performance to the high standards we’ve had all season.” ??

The hosts did re-take the lead thanks to Rob Knox’s try but Mike Macfarlane’s effort left the game level at the break.

The visitors continued their impressive performance after the restart as Benji Marfo dotted down to give Park a seven point lead.

However, scores from James Stokes and Tom Jubb as well as a penalty via Will Maisey guided the newly crowned champions home while Park came away from the Midlands with two points after Harry Leonard’s late kick.

Darlington Mowden Park scored a late penalty try as they overcame Ampthill and District in a dramatic ending at Dillingham Park.

James Pritchard’s penalty and a Kevin Barrett try put Ampthill 8-7 in front at half-time, with Brandon Asher-Wood responding for the visitors.

DMP went in front after the interval as Warren Seals landed a penalty, but with two minutes to go, Ampthill thought they had won it.

Referee Veryan Boscowen awarded a penalty try to the hosts, but he was doing the same at the other end of the field moments later as DMP capitalised on ill-discipline from Ampthill to snatch the win and consolidate second place in the division.

Blackheath are up to fourth in the National One standings after scoring 23 unanswered points to beat Cambridge.

Tries from Markus Burcham and Alex Pickersgill in the first half followed by scores via Joe Tarrant and Harry Fry proved to be the difference between the sides.

Cambridge nudged over four penalties in the opening 40 with Ben Penfold on target, but the Blood and Sand saw their lead slip away from them.

Hull Ionians gave their survival chances a huge boost as they beat Plymouth Albion to move four points clear of the relegation zone.

The I’s, who have now won eight matches at Brantingham Park this season, ran in four tries with Lewis Minikin crossing twice while Sam Wilson and Steve Slingsby also dotted down. Isaac Green kicked two conversions and three penalties for the hosts.

Dan Pullinger and Robbie Weeks each scored a converted try for Albion who are now 17 points off second place with two games in hand.

Old Elthamians moved into the top six of National One after a hard-fought win in an exhilarating encounter at Billesley Common.

The visitors scored four tries for a bonus-point as their superb debut season at this level continued and now a sixth placed finish seems a real possibility.

Ollie Claxon and Renford Bennett both crossed twice for the away side as they built a 29-7 lead.

Moseley did fight back well in the second period as efforts from Ciaran Moore and Andrew Fluker plus a penalty try added to Tom Fidler’s first half score.

But Tom White’s penalty two minutes from time helped OEs over the line in the Midlands.

Bishop’s Storford have edged closer to a top half finish in National One after a thumping 11-try win over bottom club Fylde at Silver Leys.

Ryan Hutler crossed on no less than five occasions for the home side as George Cullen also impressed for Stortford.

Connor Wilkinson, Tom Carleton (2) and Oli Parkinson secured the visitors a bonus-point, but this was another tough afternoon in a difficult season for Warren Spragg’s side.

Old Albanian made it four wins from their last five games as they beat Caldy to continue their fight to avoid relegation.

Tries from Tom Bednall and Jack Daly helped the hosts to a 14-point lead and despite penalties from Ben Jones, Dom Morris touched down to give OAs a 21-6 advantage at the break.

Ollie Morris went over shortly after the interval to secure a bonus point.

Tries from JJ Dickinson and Jones either side of an Andrew Christie score kept Caldy in the contest, but Dom Morris’ second ultimately sealed the win, with Nick Royle crossing for a consolation for the away side.

Old Albanian are now seven points from safety with three games left in the campaign.

Loughborough Students kept their hopes of staying in National One alive as they battled back to secure a crucial victory over Esher.

A try from Cameron Gentles plus two penalties from Basil Strang helped the hosts into a 20-17 interval lead, with Owen Hills scoring one of the Students’ two first half tries.

Strang added another penalty after the break, but Loughborough cut the deficit to just a point on the hour as Tim Bitrim dotted down.

And the Midlands side then went in front for the first time in this contest and it was a lead they would not relinquish as Owen Waters slotted over a penalty 13 minutes from the end to seal the win for Loughborough who are now four points from safety.