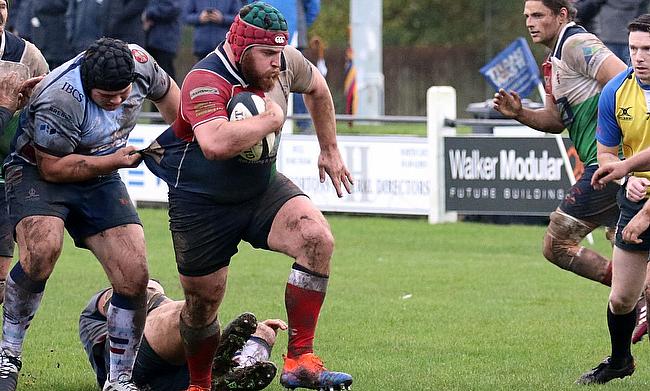 Hull Ionians halted a run of seven straight defeats in National One as they shared the spoils with Rotherham Titans in Round Nine. Photo Credit: (Hull Ionians RUFC)

The I’s even had two chances from the tee to win the contest at Brantingham Park, but they were unable to convert either opportunity in difficult weather conditions.

The result means Mike Umaga’s side are off the foot of the table and Canterbury have slipped to the bottom after losing out to Chinnor at Kingsey Road.

Both Hull Ionians and Canterbury are 16 points from safety whilst Rotherham are only two points adrift following the stalemate.

13th-placed Cambridge also had to settle for a cut of the points against Plymouth Albion whilst Sale FC lost late on at fifth-placed Birmingham Moseley.

At the right end of the table, Richmond have moved four points clear at the top after clinching a bonus-point win against Old Elthamians and Rosslyn Park remain in second following their hard-fought triumph away at Darlington Mowden Park.

Elsewhere, Blackheath continued their good form against Bishop’s Stortford to move up to third and Rams RFC put in a strong display to beat Cinderford.

National One leaders Richmond clinched a bonus-point victory over Old Elthamians to increase their advantage at the summit of the division.

Steve Hill’s side left it late to secure the extra point and with second-placed Rosslyn Park failing to follow suit, it means Richmond are now four points clear at the top.

In this contest, the hosts were level with OEs at the break as a brace from Richmond’s Ross Grimstone was cancelled out by Ollie Claxon and Mike Kovacic.

Hamish Graham’s try put Richmond back in front just before the hour and Rob Kirby gave the home side an eight-point advantage with a penalty on 66 minutes.

With the clock ticking down, Richmond were edging closer to an eighth win of the season and their latest victory was topped off by Cam Mitchell, who scooted over to clinch the bonus-point.

Rosslyn Park are still on the heels of league leaders Richmond as they narrowly beat Darlington Mowden Park at the Northern Echo Arena.

DMP led inside five minutes when full-back Brandon Asher-Wood crossed the whitewash after a flurry of pick and gos.

The hosts doubled their advantage through Callum Mackenzie, but they were pegged back by Park before the interval as Arthur Ellis and Henry Cheeseman both touched down.

The away side then moved ahead as Tom Vaughan-Edwards powered over and his score proved to be decisive as DMP fly-half Warren Seals and Park winger Craig Holland exchanged penalties in the final acts of this contest in the North-East.

Blackheath have moved up to third place in National One as they edged past a stubborn Bishop’s Stortford outfit at Well Hall.

The hosts took the lead through Jake Lloyd’s early try and the winger grabbed his second score minutes later to give ‘Club’ the perfect start.

However, Blackheath’s poor discipline allowed Stortford to level things up before the break courtesy of Baxter Wilson and Tom Lewis.

But, in a scrappy second period, the home side struck the decisive blow as Tom Baldwin’s try just after the hour sealed a third straight win for James Shanahan’s side.

Rams began November by returned to winning ways thanks to a convincing bonus-point victory over Cinderford.

The hosts made a flying-start, with Connor Stapley scoring from close range, but Cinderford responded on 24 minutes through Terence Babarinsa.

However, Rams were able to hold a commanding 26-7 half-time lead as quick-fire tries from James Baker, Conor Corrigan and Henry Bird took the game away from Cinderford.

Full-back Will Partington added a second-half penalty to finish the afternoon with nine points to his name as the Rams wrapped up an excellent win.

A score from Jarad Williams and three penalties from former Moseley man James Williams gave Sale a 16-13 lead, whilst Mason Tonks dotted down for the hosts.

Cliffe Hodgson kicked nine points in the first half for Moseley and he added to his total at the beginning of the second period to level the scores, but Jake Barron’s close-ranged effort moved Sale back in front just before the hour.

Hodgson and James Williams swapped penalties as Sale held a five-point lead heading into the final five minutes but Moseley were able to turn the game around as Biggs’ bulldozing try moved them ahead.

Hodgson then had the final say for the home side as yet another penalty secured the win which maintained Moseley’s unbeaten record on their own patch.

Chinnor produced a solid display to bounce back from successive defeats as they beat bottom of the table Canterbury.

The Black and Whites were actually 15-14 behind at half-time as tries from Chris Elder and Dan Southworth were overshadowed by Tristan King, Will Scholes and the boot of Dan Smart.

Nick Selway’s converted try after the restart put the hosts back in front, but Canterbury continued to answer all the Chinnor questions as Ricky Macintosh darted over.

However, the City Men’s powers of recovery ended there as with 10 minutes to go, Chinnor ultimately sealed a welcome victory as Wille Ryan sniped across the whitewash.

Both sides did end the contest with 14 men as Ben Thomas and Sean Stapleton were red-carded, but after a winless spell, Chinnor are back on track.

Plymouth Albion recovered from 20-0 down to earn a draw against Cambridge at Volac Park.

The home side went ahead when Ben Penfold slotted an early penalty, and they led by 20 points when Matt Mayhew and Matt Hema both scored.

Penfold added both conversions and another penalty to his tally, but Plymouth were about to mount a thrilling comeback.

Dan Swain got the visitors back in it before the break and two penalties from Connor Eastgate at the beginning of the second period made it 20-13.

George Mills then completed the fightback on 66 minutes with his converted score and despite Plymouth’s attempts to find a winner, Cambridge managed the remainder of the game extremely well as both sides shared the spoils.

Hull Ionians missed two late penalties as they had to settle for a draw after a hard-fought contest with Rotherham Titans.

A penalty try, plus three points from the boot of Max Titchener, gave the I’s a 10-3 lead at half-time.

Zak Poole’s score handed Rotherham the perfect start to the second period and despite Titchener finding the target from the tee again, Hull Ionians saw their lead wiped out as Dan Leake charged over following a yellow-card to home front-row Dave Laverick.

However, the hosts hit back after Laverick’s return to the field as Ben Stephenson smashed across the try-line to make it 20-15 and a first win of the season was in sight for the I’s.

But, Rotherham found another response as Tom Bacon went over for an unconverted try with less than 10 minutes remaining.

With the game all square, Hull Ionians were able to eke out two kickable penalties as the clock ticked down but, on both occasions, the ball sailed wide as the home sides’ wait for a victory goes on.