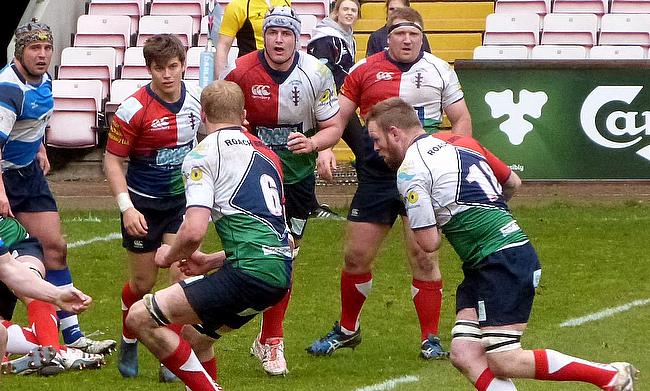 Hull Ionians gave themselves a survival boost last weekend when they beat Blackheath and they’ll be hoping for a similar outcome when they travel to Esher in Round 20 of National One.

Their victory over ‘Club’ means the I’s are now level on points with 13th place Loughborough Students, who currently occupy the final safety spot in the division.

This weekend, the Yorkshire outfit travel to an out-of-form Esher with their hosts determined to stop their current plight. Meanwhile, bottom of the table Fylde face a tough test at home to Ampthill & District, Old Albanian travel to Darlington Mowden Park and Loughborough Students are up against a buoyant Rosslyn Park.

At the right end of the table, Coventry will be aiming to edge closer to promotion when they take the trip to Bishop’s Stortford this Saturday while fourth placed Plymouth Albion go to Cambridge, Blackheath entertain Birmingham Moseley and Old Elthamians take on Caldy.

Coventry Director of Rugby Rowland Winter feels his side are back on track following their excellent victory over Esher last weekend. The Midlands club scored nine tries to claim a comfortable victory which now leaves them 15 points clear at the summit of National One as the final third of the season is set to get underway.

Cov have lost just once all season and that came in their last away outing at Blackheath so they’ll be hoping for a much more successful trip when they go to Bishop’s Stortford this weekend. Andy Long’s side have suffered back to back defeats to begin 2018, but the Director of Rugby at Stortford is not worried about standards slipping just yet after a very successful term thus far. The men from Silver Leys currently occupy seventh in the table after promotion from National Two South last April and this Saturday, they will be keen to pick up their first win of the month.

Darlington Mowden Park captain Ollie Hodgson told us this week that his side just need to keep ‘chipping’ away at Coventry as they continue their pursuit of the league leaders. DMP are now 15 points behind Cov following a hard-fought win over Caldy last weekend, which extended their unbeaten run to seven matches.

Throwback Thursday – Here's a few shots from previous encounters with @Old_AlbanianRFC! OA's are our visitors this weekend as part of Super Saturday! #ThrowbackThursday #TBT pic.twitter.com/AxPawcqx6v

DMP are back at the Northern Echo Arena this Saturday where they have a 100 per cent record so far  this term. However, Hodgson was quick to point out that DMP are eager to avoid a repeat of their last result against Old Albanian which saw Gavin Hogg’s side clinch a 33-31 victory back in October. If, OAs are going to produce a similar result they will have to be faultless. The men from Woollams accommodate 15th place in the table as things stand and they are six points adrift of safety. Can OAs upset the odds this weekend as they look to continue their battle against the drop?

Ampthill and District Head Coach Paul Turner was very satisfied with his side’s 22-12 victory over local rivals Bishop’s Stortford last weekend. Their superb home form continued as the A’s jumped into third spot in the table and they are now unbeaten in five games as they prepare to travel to bottom of the table Fylde this Saturday.

Third place in the table maybe short-lived for Ampthill as Plymouth Albion have three games in hand over the Bedfordshire side, but that problem does not compare to the struggles Fylde are currently experiencing. It has certainly been tough for Warren Spragg in his first year in charge at Woodlands and the Lancashire side end January at the foot of the division and 15 points from safety. Fylde have lost their last six matches, but they did beat Ampthill 13-11 in this corresponding fixture last season and that sort of result would be most welcome on Saturday afternoon.

It was once again another frustrating weekend for Plymouth Albion. Kieran Hallet’s side were made to put their feet up as for the second time in 2018, their home fixture was postponed. With them not being in action against Loughborough Students last Saturday, it means Albion now have three games in hand over third placed Ampthill and they are also just seven points off second placed Darlington Mowden Park so the silver medal spot is a realistic target for the remainder of this term.

Despite their stop-start beginning to the New Year, Albion head to Cambridge this weekend having won four of their last five matches so this will be a tough test for the Blood and Sand against a fresh Plymouth outfit. Having said this, Cambridge have played just once since the turn of the year with cancellations also disrupting their rhythm. Their first fixture of 2018 occurred last Saturday, but Ross Stewart’s side fell to a narrow defeat against Old Elthamians which ended a three match winning streak so can the 10th placed side end January on the front foot?

Last week, Blackheath’s match report from their game against Hull Ionians began with the line “What a difference a week can make.” Following their superb display to inflict a first defeat of the season on league leaders Coventry, ‘Club’ let their level of performance drop and they were punished by the I’s who clinched a well-deserved victory at Brantingham Park. It would have been a frustrating afternoon for all associated with Blackheath, but James Shanahan’s side have the chance to redeem themselves when they host Birmingham Moseley this Saturday.

Not the result we were looking for on Saturday, but Jake Lloyd’s interception and try against Ionians made it on to England Rugby’s Nat 1 Trylights this week… https://t.co/l72LEx3cU1

Blackheath have actually won just one of their last five matches so the visitors to London this weekend will be aiming to capitalise on that. Moseley arrive at Well Hall on the back of a strong win against Old Albanian and they occupy eighth in the table as things stand. Richard Protherough’s men will be aiming for some consistency after a patchy run of results, but they know this will be a tough challenge this Saturday, especially after Blackheath’s last outing in front of their own supporters.

This week, Old Elthamians Director of Rugby Gavin Lach heaped praise on his players following their narrow victory over Cambridge last Saturday. Some heroic defending in the final few minutes at College Meadow was key in OEs clinching their sixth win from their last seven games. Lach highlighted the ‘heart and spirit’ shown by his players in their most recent performance and that desire has been on show all term.

OEs sit in a very impressive sixth place following promotion via the National Two play-off last May and another side who came up last year, Caldy, are also holding their own. The Wirral club currently occupy 11th in the table and they so nearly came out on top against Darlington Mowden Park last Saturday, but their 10-8 loss emphasised how strong Simon Verbickas’ men are at Paton Field. Back at home this weekend, Caldy will be aiming for their fourth win from their last five matches.

Other than second placed Darlington Mowden Park, no other side in National One has a better record over the last five games than Rosslyn Park. After languishing in the bottom three in the lead up to Christmas, Kieran Power’s side have dramatically turned their fortunes around and they come into this weekend’s clash with Loughborough Students in ninth place, having not lost since the beginning of December.

In contrast, Loughborough Students have headed in the opposite direction. Following a flurry of good results before the festive break, the Midlands club were focusing on what was ahead of them rather than behind, but now they are looking firmly over their shoulders. After not being in action last week, the Students are now level on points with 14th placed Hull Ionians, with both teams having played the same amount of games. Alan Buzza’s side will be desperate to ease any relegation concerns with a home victory this Saturday.

Last weekend, a trip to Coventry was always going to be tough for Esher considering the table toppers have not lost at home for 15 months, but their 57-12 defeat just extended the Surrey side’s poor run of form. Esher prepare to welcome Hull Ionians this Saturday having now not tasted victory since the end of November, but that win did come at Molesey Road which is where all five of their triumphs have occurred this term.

Their opponents for this weekend also have a similar home record. Hull Ionians’ five victories this season have all been at Brantingham Park, but their latest win could prove to be the most significant. A 32-21 triumph over Blackheath last weekend leaves the I’s on the cusp of climbing out of the relegation places as they are currently level on points with Loughborough Students. The Yorkshire outfit will be in a buoyant mood as they head south this weekend and they may fancy their chances on inflicting more misery on Esher with the aim of jumping out of the bottom three.