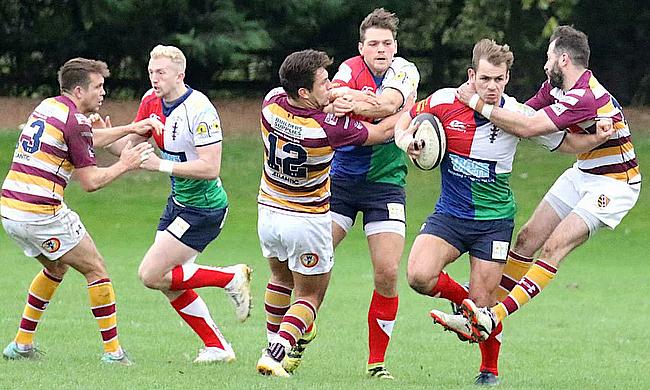 Loughborough Students and Hull Ionians are set to do battle in National One this weekend with the unwanted prospect of the bottom three at the forefront of this fixture.

As it stands, the Students are in the final safety spot, but they are just two points clear of Hull Ionians who currently occupy 14th positon and a place in the relegation zone.

Last Saturday’s victory over bottom of the table Fylde has given Hull the platform to potentially move out of the drop zone in Round 23 whilst a win for Loughborough would certainly calm any relegation nerves.

Fellow strugglers Old Albanian will be keeping a close eye on proceedings in the Midlands when they host Bishop’s Stortford and this weekend’s fixture against Birmingham Moseley could be a ‘must win’ for Fylde who find themselves 22 points off safety with time running out.

At the right end of the table, second placed Darlington Mowden Park face a tough assignment away at Plymouth Albion as they aim to continue pursuing league leaders Coventry who host Cambridge.

Elsewhere, Ampthill and District entertain Caldy, Blackheath are at home to Esher and Old Elthamians go to Rosslyn Park.

Coventry came away from Loughborough Students with a victory last weekend, but Director of Rugby Rowland Winter admitted that his side performed below their usual standards in the Midlands. Cov had to shrug off a stubborn Students outfit to clinch a bonus-point victory which kept them 16 points clear at the top of National One. In terms of the bigger picture, it was another step towards promotion to the Championship, but Winter will be hoping for an instant improvement when he welcomes his old side Cambridge to the Butts Park Arena.

When Winter departed Cambridge at the beginning of the 2016/17 season, the baton was passed over to Ross Stewart and he has certainly continued Cambridge’s upward trajectory. The Blood and Sand survived relegation in their first campaign back in the third tier, but this term, the men from Volac Park have their sights set on a top half finish following recent victories over highly-flying Ampthill & District and Plymouth Albion. Now, they take on the league leaders having won five of their last seven matches, but can Stewart claim a result against his predecessor?

Last week, Darlington Mowden Park’s Director of Rugby Danny Brown revealed that this month would be key in his side’s season. Currently, the North East outfit sit second in the table and with a fixture against fourth placed Plymouth Albion to come this Saturday before facing league leaders Coventry, DMP will have a much clearer idea of their ambitions for the rest of the season when February concludes. For now, the focus will be on their tough trip to Brickfields, but Mowden Park are in fine fettle as they take the long journey south.

As things stand, they are the form side in the division having won their last eight matches and they are also on an unbeaten run of 10 games. With this in mind, Plymouth Albion boss Kieran Hallet will be hoping for a reaction from his players after they suffered their second successive away loss last Saturday. Albion were beaten by Old Elthamians which kept them fourth in the table and any expectations of consecutive silver medal finishes are hanging by a thread. However, Plymouth have not lost at home for 14 months so another Brickfields triumph could move them to within 10 points of DMP.

It was a frustrating afternoon for Ampthill and District in Round 22. The Bedfordshire side saw their seven match unbeaten run come to a halt as they were defeated by Cambridge, but they still remain third in the division as they prepare to welcome Caldy to Dillingham Park. The A’s have lost on one occasion at home this season and that occurred against Cambridge back in October, so they’ll be hoping of an immediate response following last weekend’s disappointment.

Their visitors, Caldy, continue to impress. Simon Verbickas’ side have done superbly to establish themselves in the third tier of English rugby following promotion from National Two North last season and a commanding win over Rosslyn Park in Round 22 maintained their progress at this level. The aforementioned victory was Caldy’s fourth triumph from their last six matches which has seen move up to ninth in the table and they are actually closer to the top five in the division than the relegation places.  Paton Fields is where Caldy’s best results have come this season, but after some good recent from, they may fancy their chances of securing their third away win of campaign this weekend.

Blackheath may have felt hard done by after their trip to Darlington Mowden Park last week. A yellow-card from referee Matt Turvey seemed to take the game away from ‘Club’ as a two point deficit quickly turned into a 14-point margin. But, there were positives for James Shanahan’s side to take away from their visit to the North East and he’ll be hoping to see some of those plus points on show when Blackheath host Esher this Saturday.

The home side currently lie fifth in the table and they are unbeaten in their last four home matches, but they will have to be wary of an Esher side that is starting to hit their stride. A convincing win over Old Albanian in Round 22 means it is just one defeat from their last five games for Ricky Nebbett’s men, who are now 12 points clear of the relegation places in National One. However, the Surrey outfit are still yet to win away from home so a maiden victory on their travels would certainly keep their momentum going.

Last weekend’s victory over Plymouth Albion was clear evidence that Old Elthamians are more than suited to National One rugby. Following promotion via the National Two play-off last May, Gavin Lach’s side have been superb at this level and their resolute performance in Round 22 against one of the top teams in the league highlights this point. OEs are good value for their sixth placed position in the table and they will be in high spirits when they take on Rosslyn Park this Saturday.

Rosslyn Park head coach Kieran Power was pleased with his side’s effort and application in their defeat to Caldy last weekend, but he admitted that the way Caldy managed the game made the difference. It was a second away defeat on the spin for Park, but they remain 10 points clear of the drop zone with nine games in their season left play so a fifth consecutive home victory would maintain a decent cushion between themselves and a relegation fight.

Bishop’s Stortford were edged out by Birmingham Moseley last week and Director of Rugby Andy Long admitted that despite the weather conditions, his side just didn’t take their chances at crucial moments. Defeat at Silver Leys means Stortford have now lost four of their five matches in 2018, but the Hertfordshire outfit are still having a positive season in National One after clinching promotion last April.

Even though they are one of the new teams in the division, Stortford are currently seventh in the table and Long also told the club’s website that his side can achieve a top five finish this term so a victory at Old Albanian this weekend could set them on their way. As for the hosts, they come into this fixture in need of a victory. A defeat at Esher last time out means OAs now sit 13 points off safety with just eight games left to play. Granted, Gavin Hogg’s side still have to play fellow strugglers Loughborough Students and Fylde in the coming weeks, but time is running out for OAs. Can they begin their revival at Woollams this weekend?

Before last week’s encounter with Bishop’s Stortford, Birmingham Moseley Director of Rugby Richard Protherough wanted his players to increase their intensity and in a war of attrition, the Midlands side came out on top as they sealed their 10th win of the campaign at Silver Leys. Looking in from the outside, it seems as though this season has been one of stability for Moseley who were relegated from the Championship in 2016, but they will be keen to end the season as strongly as possible, beginning with the visit of Fylde on Saturday.

Moseley are aiming for back to back victories for the first time since November and they may feel confident of achieving that feat against a Fylde side that is battling to stay in this division. Warren Spragg’s men are currently bottom of National One and with eight games left in their season; they are 22 points adrift of safety. Their defeat against Hull Ionians last Saturday was a major blow to their survival chances, but as Assistant Coach Alex Loney told the club’s website, this young Fylde team will keep fighting to secure the wins they so desperately need.

Loughborough Students Head Coach Gerard Mullen was pleased his side gained a bonus-point in their defeat against Coventry last weekend, but he believes it could have been much more. Speaking on the club’s Twitter feed, Mullen was delighted with aspects of his team’s performance against the league leaders and thought that the Students were the better side for large portions of the match.

With that in mind, Mullen will be hoping for a similar display when Loughborough travel to Hull Ionians for a crucial clash at the wrong end of National One. The Midlands club are just two points clear of the I’s who sit in the relegation zone so the importance of this match cannot be underestimated at this stage of the season. Hull’s win over Fylde last Saturday was vital for the Yorkshire outfit and back at Brantingham Park, they now have a golden opportunity to lift themselves out of the danger zone as we approach the final two months of the campaign.