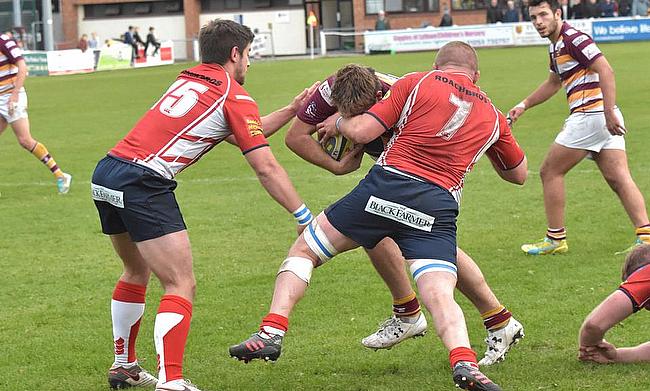 oth sides began Round Eight knowing that a defeat would leave them languishing even further behind in the National One table, but the I’s came up with a dominant performance in front of their own supporters.

Defeat for Fylde now leaves them bottom of the division and nine points from safety at this early stage of thecampaign while Loughborough Students also remain in the bottom three after being comfortably beaten by league leaders Coventry.

Cov’s advantage at the top is now six points as Plymouth Albion had to settle for a draw against an excellent Old Elthamians side and Blackheath are now up to second after victory over Darlington Mowden Park.

Two of the matches of the weekend saw Cambridge stun Ampthill and Bishop’s Storford snatch a win at Birmingham Moseley while there were also home victories for Rosslyn Park and Old Albanian.

Coventry equalled a club record of victories as they eased to their eighth win of the season against Loughborough Students at Butts Park.

Rowland Winter’s men have now secured 16 straight triumphs and Cov led 15-0 at half-time as they scored tries through Brett Daynes, Latu Makaafi and Will Maisey.

The hosts continued to dominate in testing conditions after the break and Makaafi collected his second try, while Olly Povoas and Scott Tolmie also crossed to wrap up another solid win for the league leaders.

Blackheath have moved up to second in National One, but were made to battle against a gutsy Darlington Mowden Park side.

After easing to victory over Old Albanian at home in Round Seven, James Shanahan’s men began on the front foot in this encounter when Mark Cooke bundled over from close in.

Cooke then double his and Blackheath’s tally before the teams exchanged further tries via Chris Wood and Freddie Owen as ‘Club’ took a 22-5 half-time advantage.

A Gary Law try got DMP off to a decent start in the second period but a Joe Tarrant penalty and a penalty try kept the home side in control.

Law did grab his second and the visitors were determined not to leave London without a point and they were rewarded for their endeavour when Jordan Poole dotted down.

Sandwiched in between,was a Geoff Griffiths try for Blackheath who moved past DMP in the table following their seventh win of the campaign.

A late Harvey Skinner try denied Old Elthamians a superb victory at Brickfields as both sides had to settle for a share of the points.

The home team led 12-7 at half-time thanks to a Rupert Freestone score and a penalty try while Harry Ledger went over for Old Elthamians.

But OEs hit back after the break with Max Wilkins’s try converted by Tom White, whose penalty just after the hour edged the visitors 17-12 ahead.

However, Albion left it late to square things up through Skinner and Dan Mugford’s conversion attempt could have won it for the hosts, but it was off target in a tense finale.

Jack Green’s late penalty gave Cambridge an excellent victory as they edged out Ampthill and District.

In a first half where Ampthill were on the front foot, the home side scored the only try of the opening 40 minutes as Maama Molitika darted over to give his team a 7-0 lead at the break.

Cambridge’s defensive efforts were to be rewarded in the second-half as excellent game control allowed them to put pressure on their hosts and they finally had something to show for their dominance when Albert Portsmouth crossed for an unconverted try.

But some ill-discipline from Ampthill presented Green with the chance to win it for the Blood and Sand and he duly delivered to secure a brilliant result for Ross Stewart’s men.

Alex Patton’s late try gave Bishop’s Stortord a comeback win over Birmingham Moseley at Billesley Common to continue their impressive start to life in National One.

Stortford had gone into the break 17-6 ahead after tries from Sam Winter and Will Roberts, with James Dixon slotting two penalties for the hosts.

A third try of the afternoon from winger Chris Smith put Stortford in control, but a yellow card for Roberts saw Moseley begin a remarkable fightback.

Laurence Cowen and Ciaran Moore both scored in Roberts’ absence to cut the deficit to four points and after a spell of dominance by the hosts, Jacques le Roux glided over to put Moseley ahead.

But 13 minutes later, Moseley’s joy turned to despair as Patton snatched victory from the jaws of defeat for Stortford, who now sit sixth in the table.

Rosslyn Park scored a late penalty try to secure their third win of the campaign after a thrilling game with Caldy.

The home side trailed this topsy-turvy affair 15-12 at the break, with Caldy edging proceedings as they were aiming to arrest a run of four straight defeats.

The ebb and flow of this matches continued after half-time, but the decisive moment came right at the death as Kieran Powers’ side converted a late penalty try to seal a much needed win.

Old Albanian made it two home wins on the spin thanks to this bonus-point victory over Esher.

Full-back Elliot Obatoyinbo darted over to open the scoring, with Tom Trotter scampering in to strike back for the visitors.

Both sides exchanged scores via Nick Foster and Charlie Gossington and a Paul Roberts’ penalty gave Esher the lead at half-time.

OAs’ second period got off to an awful start when replacement Ben Cooper suffered a serious leg break, but the hosts rallied.

Winger Craig Dowsett scored to give the home side a two point lead, but the nerves were then settled when Foster grabbed his second.

Morgan Thompson then rounded off proceedings to secure the win for the hosts as Esher’s away day woes continue.

Hull Ionians picked up a crucial win over fellow strugglers Fylde at Brantingham Park to move to within one point of safety in National One.

The I’s ran in  four tries in front of their own supporters with Joe Allot scoring twice while Sam Rees, Issac Green and James Sanderson also touched down.

Green kicked one conversion for the hosts and two first-half penalties while David Fairbrother and Tom Grimes each scored a converted try for Fylde who are now bottom of the division.