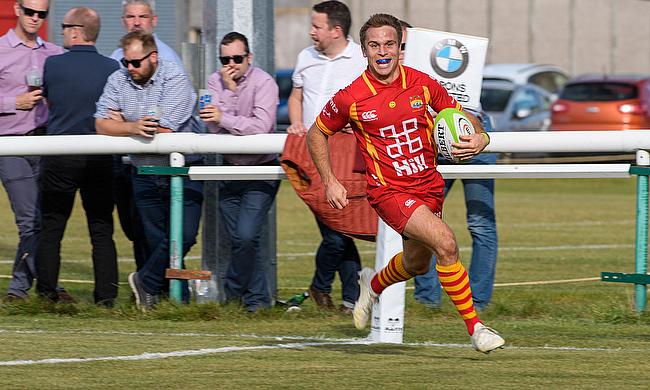 Andrew Henderson believes the recent results which Cambridge have achieved in National One are fully deserved – and it has been a product of their hard work both on and off the field. (Photo Credit: Chris Fell)

The Blood and Sand had a mixed start to the season, but over the last month or so, Richie Williams’ side have strung together their best run of form since promotion to the third tier in 2016.

Cambridge head into Round 21 having won their last six matches, including excellent victories over Cinderford and Old Elthamians.

The men from Volac Park now occupy seventh place in the league standings and Henderson feels Cambridge are experiencing this current purple patch because of their overall team effort.

The car is beginning to gather momentum. So proud of the resolve and character of all the players and staff @camrufc to make it 5 on the spin! The momentum continues…. pic.twitter.com/LvNW27HNx4

He said: “I think we had a tough start to the season. There were quite a few matches where we were losing by three or five points, but not really knowing how to win those tight games.

“Fortunately for us, that’s completely turned on its head and in the last six weeks, we’ve really found the form that we probably deserve because of what the guys have been doing behind the scenes and on the field.

“I think big kudos needs to go to our goal-line defence and our scramble defence because, in National One, teams are always going to break through. Our cover tackles from boys working back and getting through 10 plus phases to then turn the ball over has won us games in this run. The work the boys are doing on and off the field is not to be laughed at.

“We are probably about where we should be and it is just a case of keeping that run going. I have played in National One for some time now and it is a real momentum league and when you build that momentum, it is a funny thing what it does to a side. It becomes a habit and long may it continue for us.”

Cambridge were able to avoid relegation to National Two on the final day of last season, but Williams’ side have distanced themselves from danger this term.

After beating the drop, Henderson sent a text to his former coach congratulating Williams on his first campaign in charge of the club, but just four months later, the versatile back was pulling on the Blood and Sand jersey.

Henderson had recently returned from his time in Hong Kong and had no immediate goals to play rugby this season, however, the opportunity to move to Cambridge was an ideal fit for him and his partner.

“I just messaged Richie because I knew him from my university days to say well done on last season because it is never easy as your first one as a head coach to keep a side up in National One because it is a cruel mistress,” Henderson added.

“He was then like ‘I’ve heard you’ve moved back; do you fancy a different challenge?’ Moving back to London was never a discussion between me and my partner however, Cambridge came up and I spoke to her and it was a place where she’d been and loved so it kind of worked well.”

However, joining a National One club wasn’t a new experience for Henderson. Before moving over to Hong Kong, he plied his trade for Ealing Trailfinders and Rosslyn Park  in the third tier.

Henderson would have built up a wealth of knowledge during his spells at both clubs and he was keen to add his experience to Cambridge on his arrival to Volac Park.

“I don’t know about that!” Henderson said. “When you get older, you get slower! I always like to think I can add something.

“I looked at Cambridge’s results from last year as well and they also had a lot of close ones so what I was hoping to be able to bring was a bit of know-how to help the younger lads through tough situations in matches and to get back on the horse if things weren’t going our way.

“Last week for example, Canterbury [bottom of the table] pulled out all the stops and we were one minute away from coming up short against them and going from a five-point win to a two-point bonus loss so it is important to keep dusting yourself off and going again.”

Read what Matt Hema has to say in the @CambridgeIndy @camrufc https://t.co/61Zpa6msjp

Henderson will now be relishing Cambridge’s first fixture of February as the Blood and Sand travel to his old club Rosslyn Park, where he spent three seasons as a player.

Park come into this clash in the midst of a title race, but successive away defeats has left Kieran Power’s side seven points behind leaders Richmond.

Cambridge did beat Park 24-20 back in October and with the visitors to the capital arriving in fine fettle, there is no reason why they couldn’t upset their hosts again but Henderson is fully aware of the challenge which awaits the Blood and Sand at the Rock.

He added: “We played them at home, but I was unfortunately injured for that one. I haven’t missed many games this season so that one was pretty gutting.

“I know Rosslyn Park are pushing on to the next step and I wish them all the best in doing so. They came up short last week against Plymouth [Albion] and what I have read over the last month is that Plymouth are on a similar run to us.

“No-one is going to go down there and win comfortably so whilst the [41-22] result was a bit of shock in terms of the scoreline, it was probably not expected from the Plymouth boys. We are going to get the wrath of that this week so it will be a really tough game. I think it will be a competitive game and I am hoping on the day we can edge it. It will be close, but we are looking forward to it and relishing the challenge.”