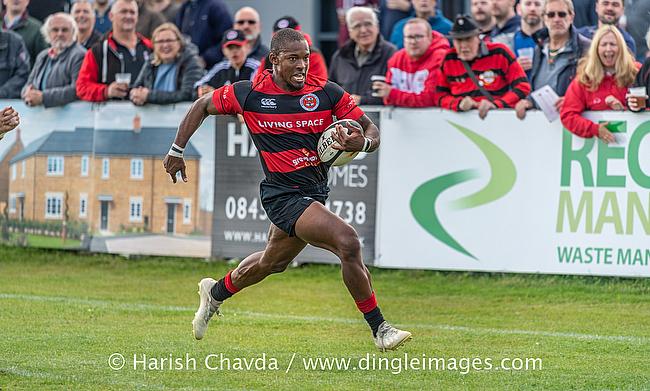 Birmingham Moseley winger Aquile Smith has emphasised the importance of ‘remaining grounded’ after a flying start to the season for the Midlands club.

A new look Moseley side hammered Hull Ionians 70-16 on the opening day of the National One campaign, scoring 11 tries in the process.

Smith, on his league debut, claimed a superb hat-trick at Billesley Common, but admits everyone at the club is not getting ahead of themselves despite a scintillating start to the new term.

Moseley have competed in the third tier of English rugby for the last three years finishing in fifth, seventh and 12th place, respectively.

However, due to the arrival of coaches Adam Balding and Pete Glackin – as well as an influx of new players – Smith feels the club are focused on steadily building in the right direction.

National One – Round One Review: New look @MoseleyRugbyFC shine on opening day #Nat1

“I think  the result [against Hull Ionians] was homage to our pre-season,” Smith told ncarugby.com. “We’ve worked hard as a team, we have come together and formed new bonds.

“The team has been restructured this year and I think everyone is aware of that. Everyone is training hard to make sure we hit the ground running and obviously 70 points is a good start, but we have got to remain grounded to show it wasn’t a one-off performance and to also show we are a good side in this league.”

As mentioned, Smith scored three tries on his first outing for Moseley. The winger certainly made an impact and did so against one of his former teams; Hull Ionians.

He added: “It is always good to start as a winger scoring tries when joining a new team. As a winger, you want to finish off tries so I was happy to do that for the team.

“The schedule came out and I knew playing Hull Ionians was a big game for me for multiple reasons. Joining a new team and having the pleasure of playing against an old team, I think it’s nice to do it justice and keep playing well.

“When you come up against an old team, you always want to play well because you are seeing old faces and you do want to leave a mark.”

Smith moved back to Birmingham this summer after completing his masters degree in Professional Development at Hartpury College.

During his time in Gloucestershire, Smith balanced his studies with playing rugby for the club at Championship level as well as in the BUCS Super Rugby division.

Having returned to the Midlands, the 25-year-old is now ‘fully committed’ to his rugby but was keen to stress the importance of gaining his qualifications.

“I think for me, I am at a position where I want to be playing at a high level and Birmingham Moseley offered me that opportunity and it is close to home for me,” Smith said. “It was kind of an offer I really had to take because it gives me a good opportunity to do everything I want to be doing this year.

“I think Hartpury was a great experience being in the Championship. It provided me with good competition for places. With so many good rugby players being there, you are always on your toes in that sense. It was also a really good experience to get my masters and study because it is good for my life after rugby.

“My commitment is now with Moseley. For some rugby players, the income is improving but that stability after playing the sport is a major thing when you’re not playing at the top straight away.

“In the back of your mind, there are always ‘after rugby’ questions you have to ask yourself and I think I am privileged to be able to say that I have got some academia behind me so I don’t have to worry as much as others so my commitment is fully with the rugby this year.”

Following an excellent beginning to his Moseley career, Smith will be oozing confidence when his side travel to newly promoted Rams this weekend.

The hosts on Saturday also began the new season with a victory as Seb Reynolds’ men defeated Cambridge 36-32 and the Rams have also not lost at home since January 2018.

However, with the club entering National One for the first time this year, they are still an unknown entity but Smith says Moseley have to concentrate on themselves rather than focusing too much on their opposition.

“Credit goes to Balders [Adam Balding] at the moment,” Smith added. “He is keeping us on the ground. We have only played one National One game so far so you can take what you want from the last game, but the season is not over until the end of April.

“You have got to take each game as it comes, play well in that game and then look to the next match.

“Going into this weekend, we have come from a strong performance so we have got strengths which we will try and stick to and build upon. We are focusing on ourselves because we are a new team.

“There is no point trying to change things straight away. Granted, we scored 70 points in the first game and we will come against harder teams, but it is more about focusing on us at this point and making sure we build as a team rather than looking too much at our opposition.

“Hopefully if we are as good as we want to be, Rams’ qualities won’t matter as much as they could do for other teams.”