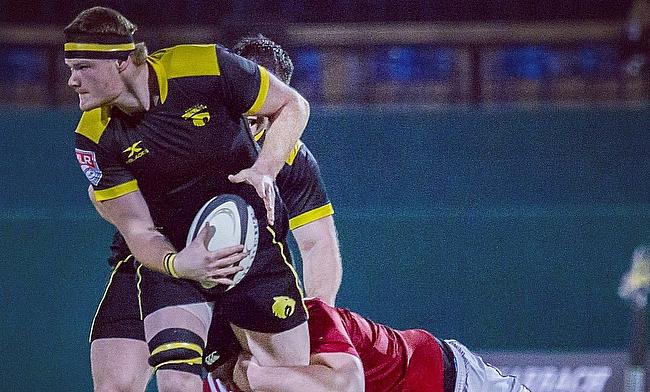 At just 23 years-old, Justin Allen has already experienced a lot in his short rugby career.

From his upbringing in Ireland to plying his trade in the United States, the towering forward is now preparing for the next chapter of his journey with Rotherham Titans in National One.

Justin Allen
At 6ft 10ins, Justin (22) is a giant Irish second row forward who has just completed a season with the Houston SabreCats in the USA.
Welcome him to the Titans and follow him on Twitter: @big_irish610 pic.twitter.com/oQWb14khKn

“I was looking for an opportunity to come back to England and play at a good level and progress from there,” Allen said. “Rotherham are a club that have a rich history so it just felt like a really good fit.”

Allen’s route to Clifton Lane is not a conventional one. As a youngster, he represented his local side Wexford Wanderers before playing in County Dongel for two seasons with Letterkenny.

Allen was also an age grade player for Ulster but in 2013, he went over to Argentina to play for the USA at youth level after qualifying through his mother.

He then played in New Zealand for New Brighton, but he has also tasted English rugby before with Chinnor and Rams FC.

Most recently, he was playing in America in the inaugural Major League Rugby competition for Houston SaberCats and Allen admits it was a great experience for him.

“Going over to America, was a massive positive for me,” said Allen. “It was my first taste of a true sense of professionalism as well.

“Some of the boys I played with in the USA youth team actually played with me or against me in the MLR so I kind of knew what to expect from them.

“From playing the game over here to playing it over there, the big thing is the styles. The Northern Hemisphere and Southern Hemisphere have their own styles, however in America, there is no real style set up just yet.

“That means a lot of different coaches have come in and they are implementing their own ideas which meant that there were some very entertaining games which added to the experience!”

Rugby in America is growing in popularity and the introduction of the MLR combined with the USA’s XV and 7s teams is aiding the progression of the game across the pond.

USA’s victory over Scotland in June highlighted the improvement the country is making and the recent Rugby World Cup Sevens in San Francisco showed just how engaged sports fans in America are with rugby.

The game is growing and we’re just at the tip of he iceberg.

“The MLR have got very grand ideas of what is coming up and I personally believe they could fulfil those dreams,” added Allen.

“The very first game we played, we had a sell-out of over 5,000 people which is a US domestic record so there is a massive demand for the sport.

“I think the first year of the MLR was a massive success. The big aim for us was to look to the future for the sport. We just want to develop it from grassroots and make it into a rugby powerhouse which it could be and we started to do that.

“We had sponsorships with CBS, ESPN etc so the league was out there and I think being able to show a larger audience what the MLR was actually about and what influence it can have on sport in America was huge.

“With the USA 7s success which has come about recently as well, that has got quite a bit of support. Having the MLR come on the coattails of the Sevens success, we have been able to drive home how successful the USA could be which is exciting for them.”

After moving away from Houston this summer, Allen will be watching the development of the American game from afar this term as he readies himself for another stint in the National Leagues with Rotherham.

The Titans’ 14-year stay in the Championship came to an end last season, but under the stewardship of Joe Barker coupled together with many new arrivals, Allen admits there is a positive atmosphere around the club despite relegation in 2017/18.

"I love the club and I want to get them back to where they belong. I was part of the team that unfortunately went down so I want to help this club return to the Championship.”@RotherhamRugby's new head coach Joe Barker chats to us! #Nat1 pic.twitter.com/bqZtuKGKJS

He added: “I am looking forward to it. The boys are really great and it is just about getting down into it now really. We have got our three pre-season games coming up and it is just about rolling along with those and getting to learn everything and focus on the upcoming season.

“I personally feel that everyone has bought into what we want, including myself. We all have the same goals and aims. I haven’t come across a single negative comment against anyone so it is really positive at the moment.”

Rotherham begin the new season against Old Elthamians at home on September 1st as they look to immediately bounce back into the second tier of English rugby.

With just one promotion place up grabs in National One, Allen is fully aware of the challenges the league poses as he aims to help the Titans have a successful year.

“Obviously last season wasn’t the greatest for us, but our aim is to try and respond in a tough league,”he added. The history of the club is Championship and that is where we want to be.

“A second year of professionalism is a massive thing for me as well. It’s about making sure the first season wasn’t just a fluke with Houston. I want to knuckle down and get into my systems and get into my regime to help the club this season, but also progress on a personal level going forward.”