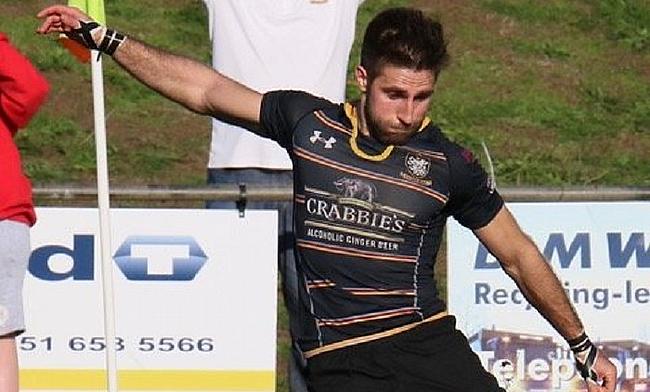 Ben Jones kicked a late penalty as Caldy clinched a dramatic victory over Esher to see them move to the summit of National One.

The Wirral outfit have picked up three straights win which has helped them move to the top of the division and they are level on points with Chinnor after their victory over Cinderford in Gloucestershire.

Caldy have moved to the top of National One as a late penalty from Ben Jones helped them narrowly beat Esher.

The scrum-half kicked 11 points throughout the match and held his nerve right at the death to land his third penalty of the afternoon to secure Caldy’s third straight win.

Esher actually led 12-11 at the interval following tries from Henry Paul and Basil Strang, with Gavin Roberts going over for the hosts.

Unbelievable game with the result going to Caldy, hard fought game on both sides decided by the last kick of the game! 31-29 #finalscore get your man of the match votes in!

Both sides exchanged two tries apiece with Harrison Crowe and Nick Royle crossing for Caldy while Charlie Gossington and Izaiha Moore-Aiono dotted down for Esher.

The away side strengthened their advantage heading into the final 10 minutes of the match as Owen Waters kicked a penalty to make it 29-23, but Royle’s second try was soon followed by Jones’ last-gasp penalty to seal Caldy the victory.

Tries from Kieran Goss and Dan George, plus 16 points from the boot of Caolan Ryan secured a fourth win of the season for Chinnor who are now level on points with Caldy.

Cinderford crossed the whitewash first through Matt Lane, with Sam Smith’s second half try bringing them to within a score.

But Matt Williams’ side were able to hold on for the win.

Moseley, who had picked up their first victory in Round Four, trailed to scores from Dom Lespierre and Ben King.

The visitors hit back with a try from Rob Lewis, but OEs carried a 17-10 lead into the break after King grabbed his second.

Tom White secured the try-bonus point for the home side after half-time, but the game was then turned on its head as Moseley took control.

Ollie Allsop and Sam Pointon both crossed and when James Williams nudged over a penalty, Moseley led 27-24.

However, OEs responded superbly as White went over again before James Golledge rounded off proceedings to seal the victory for Gavin Lach’s men.

Ampthill and District are now fifth in National One after a pulsating win over Blackheath.

The hosts trailed 17-14 at half-time as early tries from Sam Baker and Will Foster were cancelled out by an Elliot Clements-Hill penalty as well as scores via Danny Herriot and Tom Williams.

Carl Burgess’s try was a perfect start for Ampthill after the break, but the visitors hit back quickly through Clements-Hill.

However, scores from Joe Berics and Aleki Lutui put the A’s back in front with 10 minutes to go and they were able to hold on to their advantage to secure their third home win of the campaign.

After back to back defeats, Darlington Mowden Park responded with an enthralling victory over Rosslyn Park at the Northern Echo Arena.

The away side took a 19-0 lead thanks to scores from Dan Laventure, Connor Hayhow and Benji Marfo, but DMP hit back through Brendan Asher-Wood, Jordy Hop and Chris Georgiou to level the game up at the break.

Both sides swapped tries after the interval as Warren Seals and Henry Robinson crossed, but the hosts nudged themselves in front as the aforementioned Seals knocked over a penalty.

However, Rosslyn regained the lead as Adam Frampton crossed and it looked as though Park had secured the victory, but a late try from Josh Hall snatched the win for Darlington.

Cambridge put successive defeats behind them to overcome Plymouth Albion at Volac Park and clinch their first bonus-point win of the season.

Ben Penfold pinged over a penalty for the hosts before Steve Hipwell darted over to put Cambridge 15-12 up.

Dan Pullinger crossed early in the second period to give Albion the lead once again, but a yellow-card to Dan Collier gave Cambridge a route back into the game.

The Blood and Sand punished their visitors as Gillian Benoy and Wade Schoeman both went over to give them a 32-19 lead which ultimately sealed the win.

McGregor did grab his second try late on to secure two points for the away side, but Albion fell to their third defeat of the season.

Rotherham Titans scored two tries in each half to secure their second home win of the season following a bonus-point victory over Sale FC.

Will Dennis went over as did Dan Preston-Routledge as the Titans led 17-10 at the interval.

Seb Nagle-Taylor added to Rotherham’s tally after the break, but Sale FC responded to lead 27-22 in a dramatic second half.

Andy Hughes followed up tries from Adam Aigbokhae and Dan Birchall to put the away side in front, but replacement Ellis Abrahams came to the rescue as he crossed for Rotherham to clinch the victory.

Bishop’s Stortford ended the first month of the season on a high as they ran in nine tries to thrash Loughborough Students.

First-half scores from Joss Linney, Dan Elsom and Seb Brownhill saw Stortford stay in touch with Loughborough as the visitors shaded the opening 40 to lead 20-19.

Andy Boye and Will Brown had crossed for the away side in the in the first period, but they were outplayed after the interval as Stortford went through the gears.

George Keen, Linney, Sam Crean, Elsom, Rob Duff and Jimmy Rea all crossed to rack up another thumping home win for Stortford, while Loughborough’s star man, Tim Bitrim, could only grab a try for the Students in the second half.