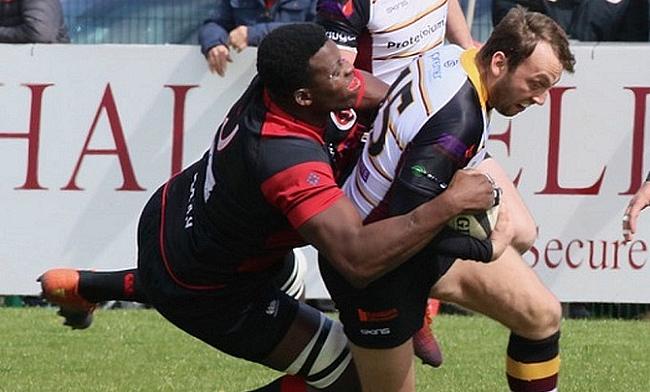 Birmingham Moseley scored a late try to avoid relegation from National One as they beat rivals Caldy and their victory also ensured Cambridge’s survival in the division. Photo Credit: (Derek Salisbury)

In dramatic scenes on the final day of the season, Cambridge looked to be heading towards National Two despite their win over Sale FC as Caldy – who were also battling to stay up – led Moseley with minutes remaining.

However, with the clock ticking down, Moseley advanced forward and Jacques Le Roux scored to snatch the win which kept both the Midlands club and Cambridge in the third tier, whilst Caldy suffered relegation.

Realistically, Cambridge knew they had to beat Sale FC and Caldy would have to lose if Richie Williams’ side were to climb out of the bottom three and that scenario occurred for the Blood and Sand.

After an extraordinary end at the bottom of the table, it was far more straightforward for Ampthill and District as they secured an historic promotion to the Championship after brushing aside Loughborough Students.

Elsewhere on the final day, there were victories for Old Elthamians, Rosslyn Park, Plymouth Albion and Darlington Mowden Park while Esher’s bonus-point win over Blackheath still wasn’t enough for Tom Williams’ side to avoid relegation.

Ampthill and District produced a sparkling performance against Loughborough Students to clinch the National One title and promotion to the Championship.

The A’s headed into the final weekend of the season requiring just one point against Loughborough to earn a place in the second tier and the visitors got the job done in the first period as Maama Molitika, Matt Collins, Aleki Lutui and Joe Berics all touched down

Free-flowing Ampthill went on to score four further tries in an enjoyable second period with Loughborough dotting down on three occasions, including efforts from Max Hill and Austin Beckett.

After four seasons in National One, Mark Lavery and Paul Turner have guided their side to the Championship and they can now look forward to facing the likes of Ealing Trialfinders and Jersey next year and also, potentially, Newcastle Falcons.

Old Elthamians completed a successful National One campaign with a comfortable victory over Rotherham Titans at College Meadow.

OEs knew it would take something miraculous for them to snatch the title away from Ampthill on the final day, but Gavin Lach’s side still ended the season with a flourish.

With OEs’ forwards providing a platform, Kieron Scutt barged his way over for the only try of the first-half.

Dom Lespierre and Rotherham’s Callum Irvine exchanged scores after the break, but OEs took the game away from their visitors in the final quarter as Ollie Claxton, Ben Howard and Lespierre all crossed.

Seb Nagle-Taylor, who has impressed all season for Rotherham, grabbed a second try for the Yorkshire outfit, but OEs had done enough to end the season with five straight wins.

Rosslyn Park recovered from an early Cinderford onslaught to finish the National One season in third place.

Tries from Ed Bouge, Alex Frame and Reuben Norville put Cinderford in control after just 16 minutes, but two quick-fire efforts from Hugo Ellis and Joe Munro brought Park back into the contest before the break.

From there, the hosts dominated. Stewart Maguire, Hugo Ellis, Benji Marfo, Ollie Grove and a double from Charlie Amesbury saw Park coast to victory to round off a very positive term for Kieran Power’s men.

Esher were able to secure an excellent bonus-point win over Blackheath, but it wasn’t enough as Tom Williams’ side were relegated to National Two.

The Surrey-based club had to pick up maximum points at Well Hall and they also needed other results to go their way if they were to survive the drop, but there were no favours from elsewhere.

Heroic fight until the end. What character from the lads! Huge Thanks @tomwiilliams for all you have done for the club.

The visitors did lead 19-5 at half-time thanks to three tries, including one from scrum-half Jack Walsh.

Alex Pickersgill had crossed for Blackheath in the opening 40 and the hosts reduced the deficit to 19-17 thanks to a brace from Freddie Owen in the second period.

Esher secured their bonus-point try soon after and even though Geoff Griffiths responded for ‘Club’, the away side were able to end a tough season with a victory.

Plymouth Albion concluded the National One season in fifth place after a battling victory over Chinnor at Kingsey Road.

A penalty from Caolan Ryan and a try via Kieran Goss put Chinnor 10-5 up early in the second half.

Sam Daly had scored in the first period for Plymouth and the visitors were able to capitalise at scrum time which proved to be the difference.

Both Dan Powell and Herbie Stupple went over from close range to give Albion the lead and despite enormous pressure from Chinnor following Dan Collier’s yellow-card, the away side held on for the win.

Darlington Mowden Park ended the National One campaign by claiming a thoroughly entertaining victory over Bishop’s Stortford in a match that featured eight tries.

Joe Craggs and Ben Frankland both touched down as DMP took a 14-5 lead into half-time at the Northern Echo Arena, with Dan Elsom scoring for Stortford.

Garry Law, who announced his retirement early last week, extended Darlington’s lead after the restart, but tries from Baxter Wilson and Sam Cappaert reduced the advantage to two points.

Law kept the scoreboard ticking over from the tee and the home side were able to move clear again as Maia Gibbs went over.

Harrison King pulled one back for the visitors, but on his final appearance for DMP, Law sealed the win with a penalty as the North-East outfit finished the season in seventh spot.

Cambridge will be plying their trade in National One next season following a dramatic escape from relegation.

Richie Williams’ side, who began the day two points from safety, knew they had to claim a victory against Sale FC whilst they also needed Birmingham Moseley to beat Caldy.

As the game entered the final few minutes in Greater Manchester, Cambridge had secured their victory and a late winner for Moseley meant the Blood and Sand’s victory at Sale was enough to confirm survival.

First-half tries from James Ayrton and Mike Ayrton set Cambridge on their way, with Simon Griffiths replying for Sale FC.

But the visitors controlled the scoreboard in the second period as Ciaran Moore and Sam Yawayawa both went over to spark the celebrations for Cambridge once the news had filtered through about Moseley’s win.

Birmingham Moseley avoided the drop in National One while Caldy suffered relegation as a late try from Jacques Le Roux was the epicenter of a remarkable end to the season.

With the game drawing to a close at Billesley Common, both Moseley and Caldy were safe but Le Roux’s try two minutes from time meant the hosts snatched the victory and it condemned the visitors to National Two.

Le Roux’s effort was not only cheered in the Midlands, but in North-West too as Cambridge survived the drop thanks to their victory at Sale, combined with the late drama at Moseley.

A Sam Brown score had given Moseley the lead in this contest, but Caldy went in front when Harrison Crowe and Rob O’Donnell crossed before half-time.

And with five minutes remaining of the game, Gareth Davies’ side were 10-7 in front but Le Roux broke Caldy hearts as he surged over to rescue the win for Moseley.