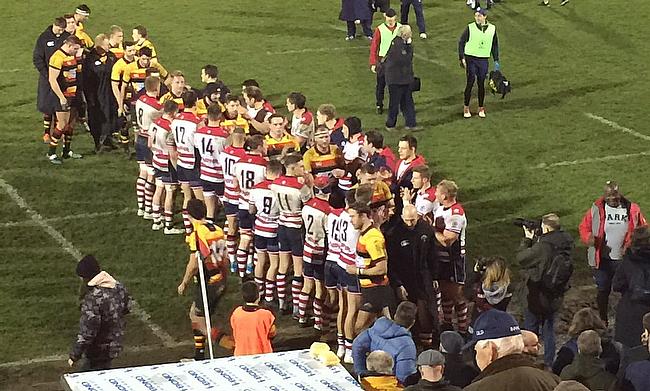 Kieran Power’s side got the better of their near neighbours to open up the title race once again, but possible contenders for promotion– Blackheath and Rams – failed to capitalise.

Both clubs lost to Cinderford and Old Elthamians, respectively, whilst fifth-placed Chinnor are now only five points behind second-placed Park after defeating Sale FC.

At the wrong end of the table, Hull Ionians picked up their first win of the season as they beat fellow strugglers Canterbury whilst Rotherham Titans’ difficult spell continued away at Bishop’s Stortford.

Richmond’s lead at the summit of National One has been cut to four points as Rosslyn Park claimed the local bragging rights in this top of the table clash.

Steve Hill’s side had their sights set on extending the gap between themselves and the chasing pack, but Park had other ideas at the Athletic Ground.

Hugo Ellis underlined the visitors’ intentions inside the first eight minutes as he rumbled over before Nick Scott darted over to increase their advantage.

A stunning try finished by @HenryCRobinson to start your #MondayMorning 🏉

Both sides then exchanged penalties as half-time approached, but Richmond claimed the first points of the second period in London thanks to Rob Kirby’s boot.

However, the key moment in the contest game on 51 minutes as Henry Robinson latched on to a Dave Lewis kick to touchdown.

The hosts did hit back as Jesse Liston went over from close range, but in the final 15 minutes, they couldn’t fashion another clear-cut chance as Park secured the victory to open up the title race once again.

Blackheath missed the opportunity to close in on league leaders Richmond as they lost out to Cinderford at Well Hall.

Tries from Tyler Jerrum and Joe Mullis, both converted by George Barton who also kicked a penalty, gave Cinderford a 17-8 lead, with Mike Perks crossing for the hosts.

Barton landed another three points for Cinderford before Terence Babarinsa rounded off a swift move to ultimately seal the victory for the visitors.

Tom Stradwick crossed late on for ‘Club’, but this was merely a consolation for James Shanahan’s men.

Old Elthamians secured a welcome victory on the road as they defeated fourth-placed Rams.

Rams were looking to narrow the gap between themselves and table toppers Richmond, but their hopes of achieving that were dashed in the final quarter when Ollie Claxon and Louis Brown both touched down.

Superb gutsy display from a reshuffled OEs side in the second half against an excellent Rams outfit. pic.twitter.com/0YGmmscZMC

A Nathan Morris score was cancelled out by Rams’ Robbie Stapley as the hosts led 7-5 at the break, but OEs immediately moved in front when Brown grabbed his first try of the match after the restart.

Will Partington landed a penalty to bring the game level, but that was as good as it got for the hosts as OEs showed their class to secure a third win from their last four matches.

Chinnor had to fend off a storming Sale FC fightback to stretch their unbeaten run to three matches in National One.

A penalty try – plus scores from Nick Selway (2), Jake Ashby, Chris Elder and Josh Hodson – helped Chinnor into a 38-7 lead.

Dan Birchall had gone over for Sale in the first period, but teammate James Williams converted his own score at the beginning of the second-half to spark a comeback.

Jake Barron, Teddy Leatherbarrow and Jarad Williams also went over and with nine minutes remaining, Chinnor’s lead was down to just seven points.

However, Matt Williams’ side stayed strong in defence to clinch the win which leaves them just five points behind second-placed Rosslyn Park.

Danny Brown’s side led 30-3 at the break at the Northern Echo Arena thanks to tries by Passman (2) and Brandon Asher-Wood, whilst Warren Seals kicked 15 points.

And a try within a minute of the restart by Passman wrapped up his hat-trick and stretched DMP’s lead even further.

Albion did muster up a response as Dan Swain crossed before Passman and Dean Squire exchanged scores either side of the hour.

Talite Vaioleti dotted down DMP’s sixth try of the afternoon before Albion finished the scoring with Swain’s second effort three minutes from time.

Cambridge recovered from a slow start to handsomely beat Birmingham Moseley in an outstanding display in the Midlands.

The Blood and Sand found themselves 10-0 up after 10 minutes with Will Biggs touching down after a Cliffie Hodgson penalty,

However, a yellow-card shown to Moseley’s James Tideswell saw Cambridge move ahead in his absence as the visitors were awarded a penalty try before James Martin dotted down.

Joe Tarrant extended Cambridge’s advantage in the first period and Richie Williams’ side then hit their straps in the second 40.

Matt Dawson, Matt Hema and Jake McCloud all crossed whilst Ben Penfold concluded the afternoon with 15 points to his name as Cambridge secured their third away win of the campaign.

Rotherham Titans’ struggles in National One continued as they were beaten by Bishop’s Stortford on Saturday.

The Titans actually led 7-3 at the break thanks to Elliot Ward’s try and the visitors were able to extend their advantage to 11 points when Anthony Maka touchdown.

However, Stortford sparked into life and a try from Nick Hankin, plus Tom Banks’ penalty, pulled the deficit back to 14-13 and the home side went on to score 17 unanswered points to clinch the win.

James Thacker scored twice on his debut to help Stortford over the line, whilst Banks landed another penalty to round off an excellent final half an hour for the home side.

Hull Ionians came from behind to secure their first win of the season as they beat relegation rivals Canterbury at Brantingham Park.

After not tasting victory in their opening nine games of the term, Hull Ionians’ drought came to an end on Saturday as they inflicted an 11th straight defeat on Canterbury.

Ben Bell, Lewis Minikin, Joe Makin and James Tincknell all crossed in the second period for the I’s whilst Max Titchener kicked 14 points.

Canterbury had actually led 15-3 at half-time following tries from Charlie Connolly and Royce Cadman, but Charlie Grimes’ late score only proved to be a consolation as the City Men’s search for a win goes on.