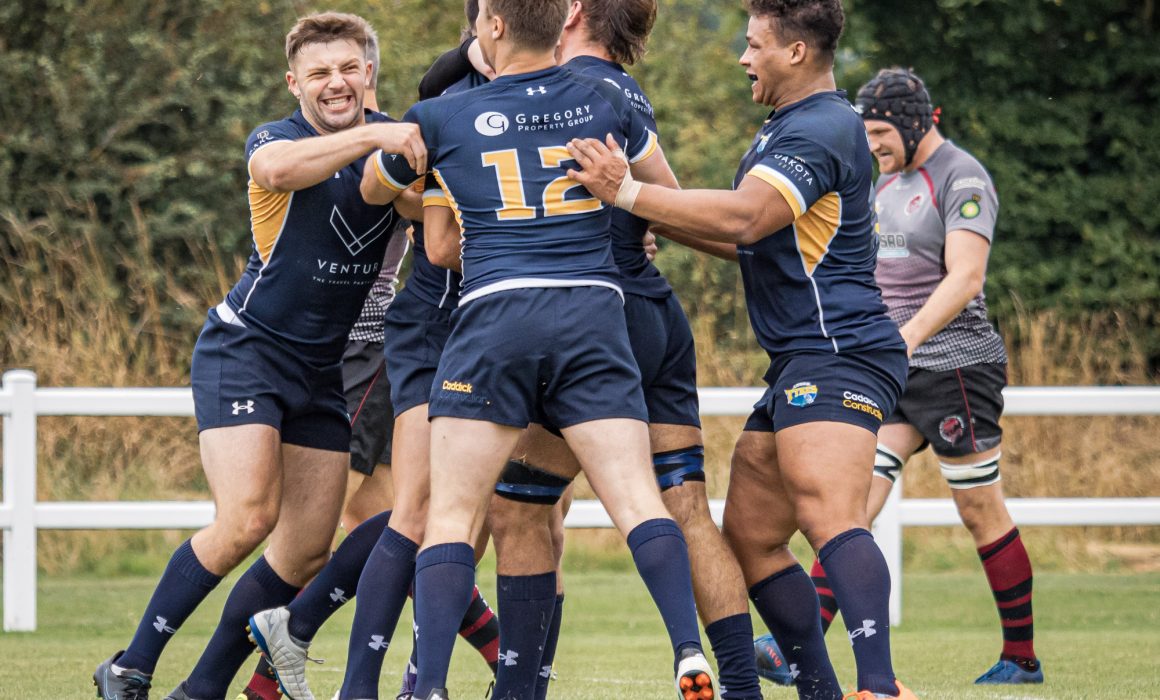 Three successive victories has helped Leeds Tykes survive relegation from National One whilst Blackheath’s 18-year stay in the third tier came to an end. Elsewhere, it was promotion joy for Esher as a thrilling season is nearly complete. Photo Credit: (John Ashton)

Blackheath have been relegated from National One after falling to a 53-28 defeat to Cinderford, who ran in eight tries at Dockham Road.

The Foresters led 28-14 at the break with Michael Wilcox, Nathan Taylor (2) and Mike Austin all crossing while Reece Boughton added four conversions.

Jake Hennessey touched down on two occasions for Blackheath and converted both of his scores.

Taylor grabbed his hat-trick and his 26th try of the season on 48 minutes before Will Hendy, Tim Anthony and Matt Lane added the gloss to the afternoon for Cinderford.

A brace from James Catt did secure a bonus point for ‘Club’, but it wasn’t enough for James Shanahan’s side to avoid the drop on the final day of a frustrating campaign.

“We lost relegation back in that period when we lost to Plymouth Albion, Tonbridge Juddians and Leeds Tykes (February),” Shanahan told The National League Rugby Review Show.

“When you are fighting relegation, you can’t lose to those teams. Unfortunately we lost a lot of players (to other clubs) and we have been running a squad of 23, 24 the last few weeks and that has hurt us. We just lacked a bit of power to finish games off and right now, we are not good enough to be National One. We have now got to come back stronger and better and I think we have got the ability to bounce up.”

And so we end the season. Thank you to the supporters, the sponsors, the players, the coaches, and everyone behind the scenes. It wasn’t our day today, but we’ll be back ❤️🖤 #blackheathfc #blackheathrugby #club #lastgameoftheseason #fortheloveofclub pic.twitter.com/nnszKnXQ5a

With Blackheath falling in Gloucestershire, it meant Leeds Tykes would be safe from relegation regardless of the outcome in their meeting against Taunton Titans but Jon Callard’s side left nothing to chance as they collected a 41-24 victory.

Aron Struminski’s early try was cancelled out by Leeds’ Adam Brown before Will Hardwick and Sam Prior swapped scores.

However, the Tykes surged in front with Harry Jukes, Tom Williams and Tighe Maxwell-Whiteley all crossing before half-time.

Brian Ncube got Taunton’s third shortly after the interval but a penalty from Charlie Venables and Ben Dixon’s effort made sure the Yorkshire outfit ended the campaign with three straight victories.

Ncube’s second late on wasn’t going to threaten Leeds Tykes’ position as they sealed their place in the third tier for another season.

Elsewhere in Round 30, second-placed Sale FC finished an excellent term with a flourish as winger Tom Walsh scored a hat-trick to help his side dispatch Chinnor 50-17 whilst Rosslyn Park ended the season in third spot despite being pegged back to a 28-28 draw against Plymouth Albion.

Cambridge missed out on the chance to snatch the bronze medal position as they lost 45-7 away at Rams RFC – with centre Connor Hayhow grabbing a hat-trick – whilst Bishop’s Storford were beaten 23-20 by relegated Tonbridge Juddians and Darlington Mowden Park racked up a half-century in a feisty 52-24 win over Birmingham Moseley.

Champions Hull were unable to complete their season with another victory as Luctonians ended their 19-game winning run by sealing a 24-7 success at Mortimer Park. Giles Morell, Tom Smith and Sam Jones all starred for Ryan Watkins’ boys whilst Hull had Cameron Curry sent off for a second yellow-card.

Sedgley Park were able to leapfrog Rotherham Titans into second-place after hammering Harrogate 66-10 at Park Lane. Jamie Harrison and National Two North’s top try-scorer Matt Gallagher both dotted down twice while the aforementioned Titans fell to a 38-19 defeat away at Wharfedale.

AUDIO: @Luctonians round off their @nat2rugbynorth campaign with a 24-7 home win over champions-elect @hullrugbyunion at Mortimer Park. Lucs' Dave Thomas gives us his assessment of the side's performance and you can listen here: https://t.co/pYI5hYtoSU

Rotherham can still finish runners-up as they, like Sedge, do have one more game to play this coming Saturday but they must pick up a maximum against Sheffield Tigers and hope Sedgley Park collected zero points when they visit Bournville.

Meanwhile, a late John Clarkson penalty saw Blaydon snatch a 22-20 win away at Loughborough Students and Bournville ran in nine tries to beat Huddersfield 55-33 in an entertaining clash at Avery Fields.

Esher have retuned to National One for the first time since 2018/19 as they secured the National Two South title following a 55-24 victory away at Rochford Hundred.

Sam Fombo marked his last game for Rochford Hundred with a try whilst Wouter Roters (2) and Najee Mundicha also crossed for the hosts.

“It is everything we have worked towards,” Director of Rugby Peter Winterbottom said on Esher’s title win. “Getting promotion to National One was always the aim and it has been great to achieve it. You have got to give credit to the boys. They have worked really hard through good times and bad times this season.

Esher’s win meant Redruth’s 24-19 loss to Leicester Lions didn’t cost Nigel Hambly’s side a shot at first place as the Reds ended another strong campaign with a narrow defeat.

Will Helliwell’s second of the afternoon at TMDP Park and a score from Jed Walsh saw the Lions come from behind to conclude the term with a seventh successive triumph.

Third place in National Two South went to Clifton as fly-half Jack Lloyd scored 18 points to guide the Lavender and Blacks to a 52-12 victory against Barnstaple whilst Worthing Raiders (4th) also surpassed the half-century as they beat Guernsey Raiders 52-21 at Footes Lane with Matt McLean notching 22 points.

Elsewhere, Bury St Edmunds recovered from three first half yellow cards to edge past Canterbury 34-31 thanks to a last-gasp Charlie Reed penalty and Dings Crusaders completed an excellent campaign by beating Westcliff 42-22, with Tom Knight scoring a hat-trick.

Also in Round 30, Old Albanian defeated Henley Hawks 38-19 and Barnes produced a strong second-half display to see off Hinckley 42-17.