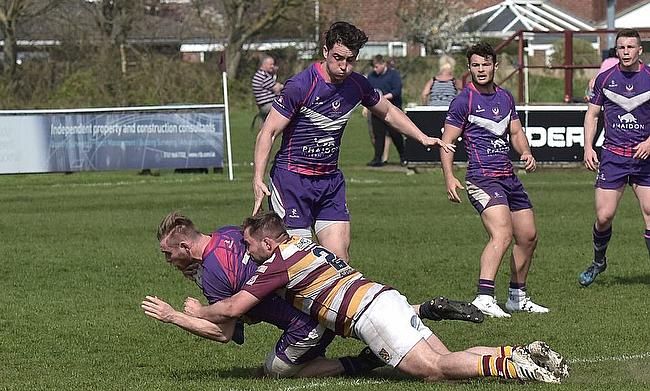 Loughborough Students blasted their way out of the relegation zone in National One following a commanding 12-try win over Fylde in Round 29.

The Midlands club are now two points clear of danger with two games in their season remaining with Darlington Mowden Park to come next weekend.

Loughborough’s win means Hull Ionians have dropped into the bottom three after they were beaten by third placed Ampthill and District while Old Albanian have been relegated from National One following their narrow loss at home to Plymouth Albion.

Along with Loughborough and Hull Ionians, Rosslyn Park are still fighting for survival as their away defeat at Birmingham Moseley leaves them just two points clear of the trapdoor.

At the top of the division, Coventry suffered back to back defeats as they were beaten by Darlington Mowden Park while elsewhere, Blackheath edged past rivals Old Elthamians and both Esher and Cambridge secured their places in National One for next year thanks to wins against Caldy and Bishop’s Storford respectively.

Mackenzie opened the scoring for DMP and they held a 21-17 lead at the break with Grant Connon grabbing a brace for the visitors, while Cov stayed in touch via a Scott Tolmie score, a penalty try and seven points from the boot of Will Maisey.

FULL TIME – A huge win for Mowden Park who take maximum points from their trip to league leaders @CoventryRugby!! A big thanks to the travelling Mowden Family for your fantastic support today and throughout the season! #MowdenFamily #ComeOnPark pic.twitter.com/0t7Fh1jFvs

Winger Mackenzie as well as Warren Seals scored after the break to edge Darlington in front following two quick fire scores from Coventry’s Max Trimble at the beginning of the second period.

Heath Stevens gave the newly crowned champions a glimmer of hope late on, but that quickly vanished as Mackenzie completed his hat-trick to clinch the win and second place for Darlington Mowden Park.

Hull Ionians have slipped back into the bottom three after they were beaten by third placed Ampthill and District at Brantingham Park.

The visitors produced a sparkling second half performance after Hull had led this contest 13-7 at the interval.

Winger James Pritchard kicked 12 points while there were also touchdowns for Maama Molitika, Gabriel Oghre, Billy Johnson, Sam Baker and George Thornton (2) as the A’s upped their game significantly in the second period.

The defeat for the I’s leaves them two points from safety heading into their final match of the season against champions Coventry.

Old Albanian have been relegated to National Two South following a narrow defeat against Plymouth Albion.

Tries from Joel Kpoku and Joseph Bridger had given Gavin Hogg’s side the perfect start and a further score via Craig Dowsett opened up a seven-point lead at the interval.

Jordan Gott and Jamie Salter had gone over in the first period for Albion and the visitors controlled the second 40 at Woollams.

Eoghan Grace barged his way over before the excellent Matt Shepherd landed the conversion and a penalty to secure the win for Plymouth and seal OAs’ fate.

Blackheath secured a top five finish in National One as they overcame their near-neighbours Old Elthamians at Well Hall.

Back came Old Elthamians after half-time with Ollie Claxon and Dom Lespierre both crossing to add to Hamish Barton’s score in the opening period.

Rosslyn Park are just two points clear of the relegation zone as they fell to their fourth straight against Birmingham Moseley.

Having gone 12-0 ahead through Ciaran Moore and Chris Brightwell, Moseley were pegged back as Josh Ovens and Adam Frampton both crossed for Rosslyn Park.

However, the hosts regained their advantage and led at the interval as Josh Poole touched down in the corner.

Moseley stretched their lead after the break as Sam Pointon and Sam Hollingsworth ultimately sealed the win for Richard Protherough’s side while a third try for Park was merely a consolation.

Cambridge confirmed their place in National One for another season as they saw off the challenge of Bishop’s Stortford in a pulsating contest at Silver Leys.

An excellent first half saw Cambridge take an early lead through Vincent Hart and Louis Rawlings, but after a series of disallowed tries, scores from Matt Tomlinson and Nick Hankin gave Stortford a narrow 14-12 advantage at the break.

George Cullen nudged the hosts further in front after the restart, but a Cameron Keenan try saw the visitors go back ahead.

Cullen responded once again, but the Blood and Sand hit back for a second time as Jack McCloud dotted down.

After the lead had changed hands, Cambridge finally created some daylight for themselves in this contest as Matt Hema crossed to clinch the win for Ross Stewart’s side, despite James Apperley’s late score for Stortford.

Esher will once again be playing National One rugby next season after they overcame Caldy at Molesey Road.

Two Basil Strang penalties and a Will Harding try edged Esher 13-12 ahead, with Rhys Hayes and Mark Dixon crossing for Caldy.

Strang helped extend Esher’s lead after half-time as he converted his own score before Harrison Collins and Charlie Gossington both crossed.

JJ Dickinson hit back for Caldy, but Cameron Zeiss’s effort for Esher dispelled any comeback from the visitors.

Caldy did clinch a try bonus-point through John Parker, but Paul Roberts’ penalty completed a satisfying afternoon for Esher.

Loughborough Students scored 12 tries as they moved out of the relegation places after hammering Fylde at Woodlands.

The Students are now two points clear of the drop zone after this thumping win and victory against Darlington Mowden Park next weekend would secure their safety in this division.