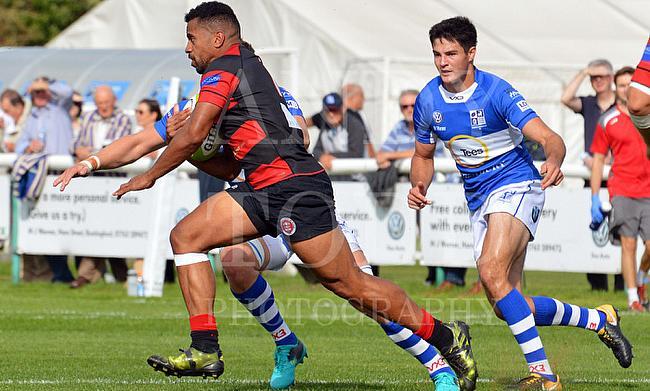 Cinderford head into Round Four of the National One season with their winning start still intact and they will be hoping it remains that way after this weekend. Photo Credit: (Andy Todd Photography)

Paul Morris’ side will be targeting a fourth straight victory when they host Birmingham Moseley on Saturday as the Foresters look to keep pace with early table toppers Rosslyn Park.

Like Cinderford, Park have also recorded three successive victories and they have the chance to enter October at the summit of National One if they can defeat Blackheath in Round Four.

Richmond and Rams are still yet to taste defeat with the former taking on bottom of the table Hull Ionians this weekend whilst the latter have a tasty fixture against old foes Chinnor.

Rosslyn Park’s excellent start to the season got even better last week as Kieran Power’s side secured their third victory on the spin against Canterbury. The men from the Rock also went to the summit of National One and to conclude September, they entertain Blackheath in Round Four.

The visitors on Saturday finished in fourth place season, just a single point behind Rosslyn Park, but ‘Club’ have had a mixed start to this campaign. James Shanahan’s side so nearly secured their second win of the season in Round Three, but they missed a late conversion after a strong showing against local rivals Richmond. It is another all-London affair on Saturday so can Blackheath end Park’s winning run?

Cinderford have been on the brink of defeat in their last two matches, but on both occasions, Paul Morris’ side have rescued victories. In Round Two, they left it late to defeat Plymouth Albion and last Saturday they secured an unlikely win against Cambridge after having Harry Hone sent off.

The Foresters will be hoping for more straightforward afternoon when Birmingham Moseley visit Dockham Road. The hosts will have to be wary of flying winger Aquile Smith as he has begun the season in scintillating form. The ex-Hartpury man has bagged two hat-tricks in his first three games for the club, including in last week’s pulsating win against Bishop’s Stortford. Adam Balding’s side have won both of their matches at home this term so they will be keen to open their account on the road this weekend.

It has been the perfect beginning to life back in National One if Richmond are aiming for an immediate return to the Championship. Three straight wins is exactly what Steve Hill’s men would have been targeting and the fact that they have seen off strong opposition in the form of Darlington Mowden Park, Chinnor and Blackheath is also a signal of their intent.

Richmond will be firm favourites to make it four victories in a row when they travel to Hull Ionians on Saturday, but the despite the hosts still searching for their first points of the season, they were much improved last weekend. The I’s did lose out to Chinnor, but Mike Umaga’s men were much more competitive and the Yorkshire outfit will be hoping to end the month on a high.

It is still early days in the National One season, but as September draws to a close, Rams RFC are starting to turn heads. The newly-promoted side have been exceptional in their first outing at this level and successive wins against Cambridge, Birmingham Moseley and Darlington Mowden Park have certainly been eye-catching.

But for some, this brilliant form may not be surprising. The Rams have actually won 34 of their last 36 league matches and haven’t lost at home since January 2018 so Chinnor will not be taking their visit to Berkshire lightly. Matt Williams’ side bounced back from their Round Two defeat with a hard-fought win over Hull Ionians. The Black and Whites sustained a number of injures, but one positive they can take into this fixture is that Chinnor are the last team to beat Rams at Old Bath Road.

Ben Gulliver would have had a smile on his face last Saturday afternoon as his Plymouth Albion side secured their first victory of the National One season. Following heartache against Cinderford in Round Two, it was Albion’s turn to be on the right side of some late drama as they snatched a victory against Rotherham Titans.

In terms of Old Elthamians, they will be eager to return to winning ways when they entertain Plymouth in Round Four. After beginning the season impressively against Canterbury, Gavin Lach’s side have fallen to successive losses against Rosslyn Park and Sale FC. Their defeat at Sale last week would have been very frustrating so this weekend, expect a reaction from last year’s runners-up.

Just like last season, it has been a mixed start to the campaign for Darlington Mowden Park. Danny Brown’s side fell to their second defeat of the campaign in Round Three as they lost to Rams RFC at home so back on their travels, the North-East side will be itching to conclude September in a positive fashion.

It is a similar story for Bishop’s Stortford too. Andy Long’s side have had a dip in form after their dramatic opening day win at Plymouth so they will be aiming to bookend the month with another victory this weekend. Mowden Park took home the spoils in this fixture last year so can Stortford gain their revenge at Silver Leys?

Cambridge were on the edge of basking in their second victory of the season against Cinderford last weekend, but their win was stolen away from them in the dying ambers of the contest. Richie Williams’ was rightly disappointed following the defeat, but the Blood and Sand would have dusted themselves down for their trip to Rotherham Titans in Round Four.

The hosts also suffered late heartache last time out, but were the victims of a Plymouth Albion fightback at Brickfields. Like Cambridge, the Yorkshire club have also won one of their three matches this term, but their sole victory did occur in their previous home match against Sale FC. Both sides will be keen to end the opening month of the season on the front foot so expect an exciting contest at Clifton Lane.

It had been a tricky start to the season for Sale FC and when Old Elthamians rocked up to the CorpAcq Stadium in Round Three and followers of National One may have expected an away win. However, Jonathan Keep’s side upset the odds to clinch their first victory of the campaign thanks to an excellent defensive effort.

This weekend we’re away for our first ever fixture @cantrugby last weekend we managed to win against @ElthamiansRFC in a tight game at Heywood Road. Here’s all the tries from Sale and OE’s #trylights #onesalefc #saletown #rugby commentary by @TomLushMediahttps://t.co/TUNonlNFaC

With Sale now up and running, they will be hoping to build on last week’s victory when they visit newly promoted Canterbury on Saturday. The home side have collected just two points from their first three matches at this level, but it has been a tough start for Andy Pratt’s side. Fixtures against Old Elthamians, Blackheath and Rosslyn Park (three of last year’s top four) means it really has been a difficult beginning to life in National One for the City Men, but a home victory to conclude September would provide the perfect morale booster.