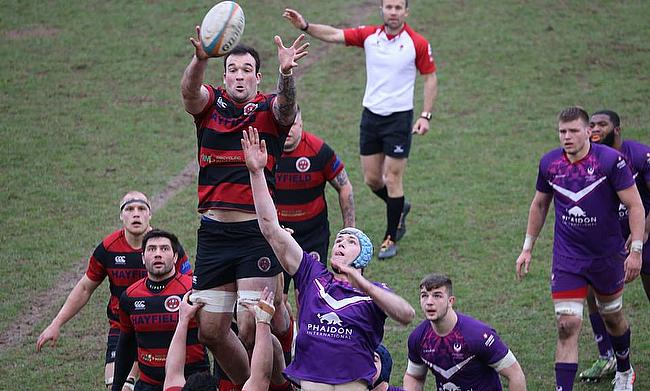 Birmingham Moseley scored five tries as they beat Loughborough Students to move to within three points of safety in National One.

The victory at Billesley Common could prove vital for Richard Protherough and his side while defeat for Loughborough leaves them 10 points adrift of safety with six games remaining.

Fellow relegations rivals Esher were beaten by Darlington Mowden Park while the likes of Caldy and Cambridge may be looking over their shoulders after defeats against Cinderford and Bishop’s Stortford, respectively.

At the summit, Old Elthamians and Ampthill & District remain level on points after both secured bonus-point wins in Round 24. OEs triumphed over Plymouth Albion and the A’s saw off Rotherham Titans as both sides now prepare to meet this coming Saturday in a huge game in the title race.

Promotion candidates Rosslyn Park are only four points behind the leading duo as they beat Chinnor while Blackheath are still in the conversation following their win against Sale FC.

Albion had led 24-20 at half-time, helped by tries from Josh Skelcey, Matt Shepherd and Jon Dawe, while OEs points came via the boot of Joe Carlisle as well as scores from Fred Hosking and Adam Batt.

But after the break, tries from Hamish Barton and Rhys Morgan, plus two further penalties from Carlisle, guided the hosts to victory.

TRY-LIGHTS ????|
A seventh successive #Nat1 win for @ElthamiansRFC last Saturday thanks to tries from:

Herbie Stupple crossed for Plymouth to ensure the away side’s efforts were rewarded with a bonus-point.

OEs have now won their last seven games and they head into a huge top of the table battle against Ampthill and District with confidence behind them.

Ampthill and District remain level on points with table toppers Old Elthamians ahead of their clash next weekend after battling to a victory against Rotherham Titans in Round 24.

The A’s were able to secure their seventh win on the spin to maintain their promotion challenge and they scored five tries to four to seal a bonus-point victory in Yorkshire.

Jamie Cooke, Seb Nagle-Taylor and Dan Leake (2) were Rotherham’s try scorers as the hosts fell to their fifth defeat from their last six matches.

Rosslyn Park made it five wins on the trot as they fought back to beat Chinnor to stay firmly in the title race.

Tries from Ed Hoadley and Tom Jubb helped Chinnor into an early 14-0 lead.

Stewart Maguire’s try sparked a comeback and Arthur Ellis and Hugo Ellis (2) also went over as Park led 24-17 at half-time.

The hosts extended their advantage to 14 points after a Maguire try, but Chinnor stayed in touch as Jubb grabbed his second of the afternoon.

Adam Frampton kept Park in front with his score on 74 minutes and despite a late effort from Reon Joseph, the hosts held on to remain four points behind the top two.

Blackheath’s title hopes are still alive as they battled to a bonus-point victory over Sale, who had two players sent-off.

The away side trailed 11-8 at the break following a score from Stone Priestley-Nagle and six points from the boot of Emiliano Calle Rivas, but Sale also saw Joe Kelly dismissed in the first period.

Jake Lloyd scored for Blackheath in the opening 40, but they fell further behind after the interval as Paolo Odogwu darted over.

Leo Fielding cut the gap to 18-11 before Blackheath gradually took advantage of their extra man. Harry Bate’s score levelled things up and two penalty tries in the last 10 minutes helped the visitors over the line.

During the final stages, Neil Briggs was also shown a red-card as Sale ended the contest with 13-men.

Esher were unable to get the better of Darlington Mowden Park as the visitors’ survival hopes suffered another setback.

DMP bossed the first half and led 24-7 after touchdowns from Simon Uzokwe, Ollie Walker and Shaun McCartney, while Warren Seals landed a penalty.

Fly-half Basil Strang had dived over for Esher in the first period and the away side sparked into life after the restart as Jack Musk’s score on 49 minutes gave them hope.

However, the Surrey-based outfit had to settle for a losing bonus-point as Lloyd Davies slotted over a penalty and it means Esher are now nine points from safety with six games remaining.

Cinderford had to survive a Caldy fightback to clinch a win in a thrilling National One encounter at Dockham Road.

The home side created a 17-5 cushion thanks to tries from Aaron Ryan (2) and George Boulton, but only after Caldy had opened the scoring through Luke Hibberd.

However, the away side were able to head into half-time trailing by just two points as Ben Jones and Hibberd both touched down.

But once again, Caldy responded and tries from Rhys Hayes and Josh Dickinson set up a tense finale, but Cinderford held on for the win.

Despite a spirited display, this may have felt like a missed opportunity for Caldy because they are now only three points clear of the relegation places.

Bishop’s Stortford returned to winning ways in National One as they overcame Cambridge at Silver Leys.

Ben Penfold’s penalty reduced the home side’s lead after the break, but Stortford hit back and took the game away from Cambridge.

Tom Banks slotted his second penalty of the afternoon before Joss Linney touched down for the hosts to make it 18-6.

Banks was on hand to kick two more penalties as Andy Long’s men secured the victory which leaves them eight points clear of the drop zone, while Cambridge are now just four points ahead of the relegation places.

Birmingham Moseley held on for a vital victory as they beat relegation rivals Loughborough Students to move to within three points of safety.

Moseley led through Graham Geldenhuys’ try and the back-row crossed again, as did Jacques Le Roux, to give the hosts an 18-10 half-time lead.

Harry Priestner crossed in the first period for Students and the visitors were only a point behind Moseley when Thibaud Flament dotted down.

The home side responded as Sam Hollingsworth and Chris Brightwell both went over to make it 30-17, but Loughborough mounted a fightback.

Cameron Jordan and Taylor Gough scored to set up a dramatic finish, but Moseley held on for a crucial win.

The defeat for Loughborough means they now 10 points adrift of safety while Moseley’s survival hopes have been boosted.