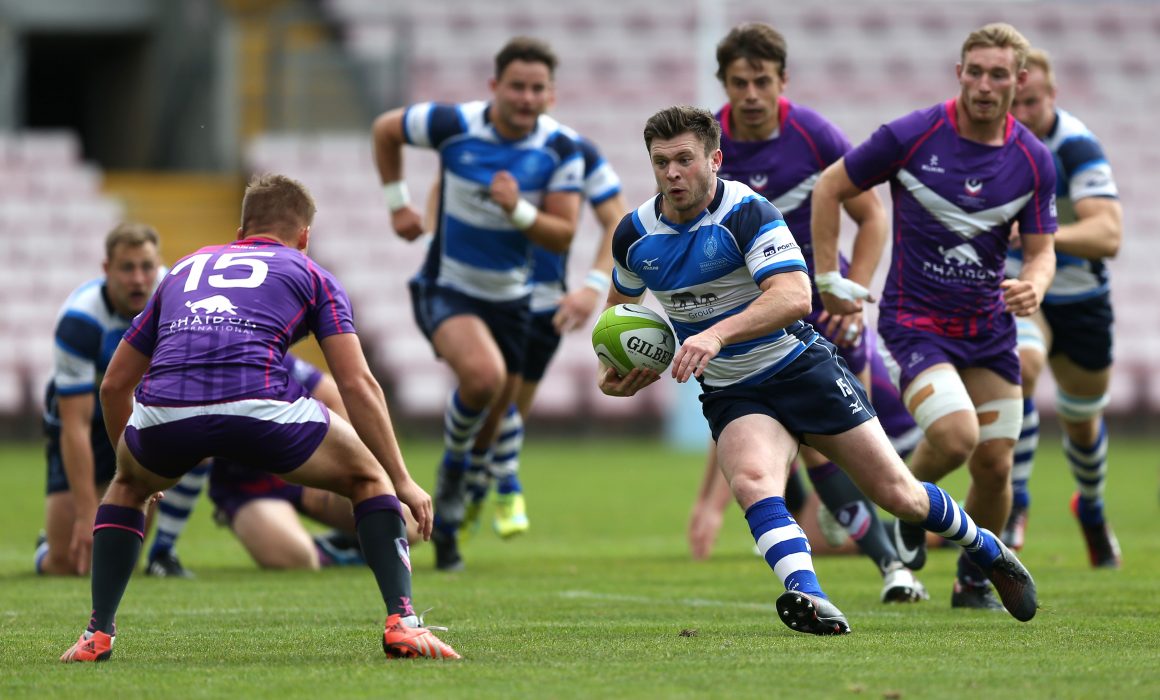 Darlington Mowden Park produced an excellent month of rugby in September to seal five straight bonus-point win and they will be keen to stay at the summit following the first weekend of October.

Danny Brown’s men are only a point clear of Coventry, who also won five on the bounce last month, and both sides are showing an impressive determination not to lose their unbeaten starts.

DMP and Cov take on Old Albanian and Bishop’s Stortford this weekend while hot on the heels of the top two are Plymouth Albion, Blackheath and Ampthill and District who will be aiming to continue their positive run of results.

Elsewhere, Old Elthamians are enjoying life in National One and they will be hoping that continues this weekend against fellow newly promoted side Caldy while down at the bottom, Hull Ionians will be desperate for a win against Esher and victory for either Rosslyn Park or Loughborough Students could be the catalyst for their season.

Darlington Mowden Park enter October in fine form. The table toppers secured five wins from five last month and they will be aiming to maintain their excellent start to the season when they travel to Old Albanian tomorrow. Danny Brown’s side have secured maximum points so far this term and they are strong favourites to seal another bonus-point win this Saturday.

Their hosts, Old Albanian, currently occupy 13th place in the table having triumphed on just one occasion so far this season. OA’s sole victory came in Round Four away at Hull Ionians and they will be hoping to clinch their first home win since they beat Blaydon on the final day of last season.

It is now 13 matches in a row since Coventry last lost a league game. Rowland Winter’s side continue to improve as they begin October on the back of five straight victories. Cov have also won 16 of their last 17 matches at Butts Park so the challenge facing Bishop’s Stortford this weekend, is a tough one.

While Cov were rampant last week against Esher, Stortford shipped 41 points away at Ampthill and District, but that is just a small blotch on what has been a strong start to the season from Andy Long’s side. The men from Silver Leys have won three of their five matches since promotion in May and if they were to become only the second side to beat Coventry at Butts Park in the last 13 months, then it would surely be their finest result thus far.

After a narrow defeat to Blackheath on the opening day of the season, Plymouth Albion are really starting to shift into gear. Kieran Hallet’s men have secured four consecutive wins since the first week in September as they continue to close the gap between themselves and the current top two.

Albion welcome Cambridge to Brickfields on Saturday aiming for their 17th home victory from their last 18 games, which gives us an indication about the task facing the visitors. Ross Stewart’s men narrowly missed out on their third win of the season last weekend against Old Elthamians, but the Blood and Sand have certainly made strides in recent weeks as they look to upset the odds on the south coast tomorrow

Blackheath travel north this weekend as they prepare to take on Birmingham Moseley. ‘Club’ will be satisfied with the start they have made as they currently sit fourth in the table after the first month of the season. Blackheath have won four of their five matches this term – with their only defeat coming away at Coventry – and they will be eager to add another triumph to that record this Saturday.

It has certainly been a mixed campaign for Birmingham Moseley thus far. Richard Protehrough’s men have yet to really hit the standards which they set last season and their current league position highlights that. Moseley occupy 10th in the table following victories over Hull Ionians and more recently Old Albanian, so they will be hoping to repeat last weekend’s result against OAs as they aim to begin moving back into the top half.

It has taken a few weeks, but Ampthill and District seem to have sprung into life. The A’s finished third last term and were seen as one of this year’s promotion candidates but after a slow start, the quality of the Bedfordshire side is now starting to shine through.

A comprehensive win against Bishop’s Stortford last weekend was their second on the spin and the fifth placed side welcome Fylde to Dillingham Park tomorrow, with followers of this division tipping a home win. However, the visitors will have something to say about that as they head south in a buoyant mood. Warren Spragg’s men secured their first victory of the season last weekend against Rosslyn Park and they will be aiming to rock the boat once again this Saturday.

In Round Three, Director of Rugby Gavin Lach stated that Old Elthamians needed to just a win to relieve some pressure following promotion to National One in May, but what has occured since their maiden victory against Fylde has been superb for OEs. The men from College Meadow head into their latest fixture against Caldy having won their last three matches and they currently sit sixth in the table and deservedly so.

Next on their list is the aforementioned Caldy who, like OEs, were promoted into this division for the first ever time in their history in the summer. The Wirral side began strongly with victories against Bishop’s Stortford and Fylde, but they head south on the back of three straight defeats so they will be itching to recapture their early season form this weekend.

Following a promising start to the campaign, Esher have just gone off the boil slightly in recent weeks. Successive home wins against Old Elthamians and Rosslyn Park was a decent beginning, but they travel to Hull Ionians tomorrow following back to back losses.

It is far from disastrous for the Surrey based side, who may fancy their chances of turning their recent form around when they visit Brantingham Park. Their hosts are really struggling for results and after last year’s tight and tense relegation battle with Blaydon, it looks as though Hull Ionians are in for another fight this term. The Yorkshire outfit currently sit rock bottom of the division and are the only side without a win, but in front of their own supporters, they have every chance of breaking their duck this weekend.

For Rosslyn Park and Loughborough Students, this is a game which they will hope can kick start their seasons. The hosts began the campaign in ruthless fashion as they brushed aside Old Albanian, but since then, Kieran Power’s side have not been able to find their rhythm. Defeat at Fylde last weekend summed up a difficult month for Park, but as we saw on the opening day of this season, they have the quality to turn things around.

The same can be said for Loughborough. Following their only win of the season in Round Two away at Cambridge, the Students have not been far off doubling their tally for the campaign with battling performances against Plymouth Albion, Caldy and Old Elthamians but ultimately, they have picked up just two points from those matches. Defeats against two of the newly promoted sides would have been tough to take so the Students will be aiming to pass their latest test when they travel to London tomorrow.