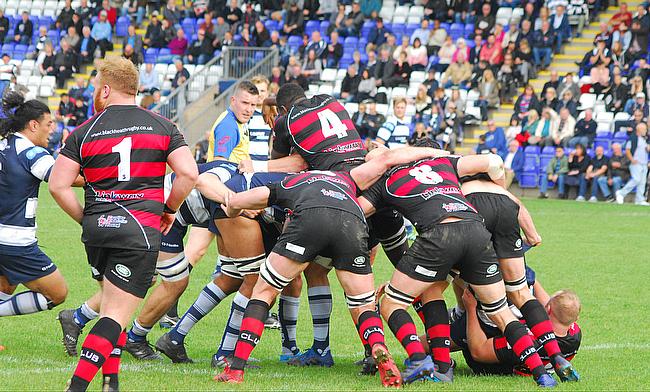 Darlington Mowden Park’s fixture with league leaders Coventry this weekend has been postponed due to a frozen pitch, but National One still has plenty to offer as we reach the midway point of the season.

Blackheath have the chance to close the gap on second placed Darlington when they travel to Old Elthamians this weekend while Plymouth Albion host Old Albanian, Ampthill entertain Hull Ionians and Bishop’s Stortford as well as Birmingham Moseley are on the road when they take on Cambridge and Rosslyn Park, respectively.

Elsewhere, Esher take the trip to Caldy and there is an intriguing fixture down at the bottom as Loughborough Students face Fylde.

With Ampthill and District dropping points last Saturday and Plymouth Albion not in action due to postponements, Blackheath moved back into the top three of National One after victory over Caldy at Well Hall. James Shanahan’s side have now won three of their last four matches and they face another one of the promoted clubs this weekend when they take the trip to Old Elthamians.

Old Elthamians ended a run of three straight defeats in Round 13 and they backed that performance up with a gutsy win over Old Albanian last Saturday to keep themselves sitting in the top half of the National One table. As we hit the halfway point of the season, Gavin Lach’s side have done superbly following their National Two play-off win in May and another victory before Christmas would be a wonderful way to complete an historic year for OEs.

Plymouth Albion are presumably coming into Round 15 fresh after their fixture with Birmingham Moseley was called off last weekend. However, the men from Brickfields could have a different view as they may have wanted to build momentum following their win against Hull Ionians at the start of the month after a patchy run of form prior to the beginning of December.  Kieran Hallet’s side managed just one in five matches which has seen them fall away from any promotion battle so the short term aim now for Albion is to end 2017 on a high.

Their opponents this weekend are Old Albanian, who would have been disappointed not to have gained a result last week against Old Elthamians. OAs produced a decent performance, but some indiscipline cost Gavin Hogg’s men who remain in the bottom three with two matches remaining before the Christmas break. The Hertfordshire side are eight points from safety as things stand and have lost their last six matches as they head into this tough test at Plymouth so the odds seem to be stacked against OAs.

It has been a difficult few weeks for Ampthill and District. Just one win in their last four games has seen the Bedfordshire outfit fall away from any promotion challenge and it looks as though the A’s will once again be competing for one of the other top spots for the third consecutive season. Defeat against Darlington Mowden Park last weekend may well have confirmed that, but Paul Turner’s side will continue to battle and next on the agenda is the visit of Hull Ionians.

Both Ampthill and Hull Ionians were promoted into National One in 2015, but since then, both have had contrasting fortunes. While the A’s have established themselves as one of the stronger sides in this division, the I’s have fended off relegation in each of the last two campaigns and it looks as though they may have to do that again this term. As things stand, the Yorkshire side are three points clear of the drop zone, but they do have a game in hand following the postponement of their fixture last Saturday against fellow strugglers Rosslyn Park. Can Hull claim their first away win of the campaign this weekend or will Ampthill bounce back?

It has certainly been a year to remember for Bishop’s Stortford. They stormed to the National Two South title in the first half of 2017 and since joining National One, Andy Long’s side have not looked back. Stortford currently occupy sixth place in the division at the midway point of the campaign which is a remarkable achievement for the men from Silver Leys and they head into this weekend having lost just one of their last eight matches.

There's plenty of rugby Volac Park this weekend. Come along and support the lads……… And enjoy the beer festival. ?????? #TheSixteenthManMakesTheDifference pic.twitter.com/VRsj2vemnB

Stortford responded to their defeat against Fylde in Round 14 with strong display against Loughborough Students and they will be hoping for a similar outcome when they visit Cambridge this weekend. The hosts once again triumphed on the road last Saturday and their win at Esher was their fifth victory away from Volac Park this term. Ross Stewart’s men sit ninth in the table and if they are to push higher up the division, their home form must improve. It has been an excellent season so far for the Blood and Sand but one home win all campaign isn’t good enough and Cambridge will be aiming to double their tally this Saturday.

Both Rosslyn Park and Birmingham Moseley were not in action last Saturday as their respective fixtures fell foul to the weather so both teams will be itching to return to action this weekend. Moseley travel to London aiming to bounce back from a disappointing defeat to Old Elthamians which ended a run of four straight wins. Richard Protherough’s side are in the top eight as things stand and a fifth away win of the campaign would keep them there heading into the final week before Christmas.

While Moseley have their sights set on staying in the top half, Rosslyn Park’s short term aims maybe focused on staying in this division. It has been a dramatic decline for the men from the Rock who currently sit in the bottom three and they are three points from safety. Kieran Power’s side have won just three times this term and host Moseley this weekend having not won for just under two months. Park now have a great opportunity to earn themselves an early Christmas present which could see them move out of the drop zone.

Esher suffered a narrow defeat at home to Cambridge last weekend which saw them miss out on the chance to go above the Blood and Sand in the table, but the Surrey-based side now must regroup when they take on Caldy in Round 15. Esher have won five games this season and sit one place above their hosts in the table, but all of those aforementioned victories have come at home.

Rickey Nebbet’s men have lost all six of their away fixtures thus far so Caldy will feel like Esher could be there for the taking on the Wirral this weekend. Simon Verbickas’ side have made steady progress after clinching the National Two North title in April, but one thing that has stood out over the last couple of seasons is Caldy’s home record. The men from Paton Fields have lost just four of their last 21 matches on their own patch and after back to back home wins against Hull Ionians and Old Albanian; they will be aiming to make it a trio of triumphs this weekend.

Loughborough Students’ three game winning run came to an end in Round 14 as they were beaten by Bishop’s Stortford, but they have the chance to hit back immediately as they take on Fylde this weekend. The Students’ mini revival has seen them move up to 12th in the table, but they are three points clear of the drop zone so victory against the division’s bottom club this weekend could prove to be a vital result in their season.

However, Fylde will have other ideas. Following an outstanding victory against Bishop’s Storford two weeks ago, Warren Spragg’s men so nearly upset Darlington Mowden Park last week, but a deserved bonus-point now leaves the Lancashire side nine points from safety. Fylde have won on three occasions so far this season and two of those victories have come against sides just above them in the table. Another result like that at Epinal Way this Saturday would give the men from Woodlands a huge lift that they can dig themselves out of trouble as we enter the second part of the campaign.