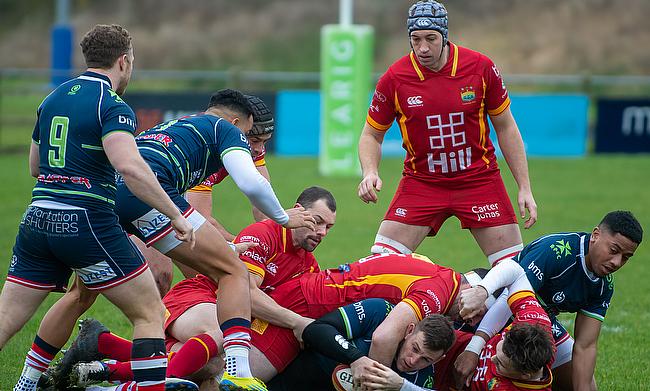 It seems like only five minutes ago that Ben Jones of Caldy kicked over a penalty in front of a packed-out Paton Field to send his side to the Championship. Photo Credit: (Chris Fell)

Sale FC had maintained a relentless pursuit of their North-West rivals, however back in April, their promotion bid came to an end and the National One title went to the Wirral outfit.

In Yorkshire, Hull produced a historic campaign – winning 27 of their 30 matches – to be crowned champions of National Two North whilst in the south, it was unbridled joy for Esher who edged past Redruth in an enthralling fight for top spot.

But now it is time to do it all again.

The final cut of the grass, the final tactical tweaks, and the finishing touches to the clubhouse will all have been addressed as teams up and down the country prepare for kick-off in 2022-23.

National League Rugby has also had a revamp ahead of the new term. Following the restructuring by the RFU, 56 teams now make up tiers three and four, with clubs spread out evenly across four divisions.

National One remains the only league at level three but National Two has been split into three sections – National Two North, National Two East and National Two West. The result of this means fixtures are more localised and there are also fewer games.

“The players, in many ways, were the driving force for this change and that is the key thing,” says National League Rugby Chairman John Inverdale. “The players were saying they were exhausted playing 14, 15 games consecutively. They wanted a break.

“In the end, coming down to 14 teams in a league made sense on many levels. There are one or two clubs whose travel requirements are going to be similar and, in some cases, might be even more than last year, but for a lot of clubs, there is a lot less travelling each year. That means less time on the road and for players, it means less time away from their families so this whole review was on the basis, in the widest possible context, of the people who actually play the game.”

There is a lot to be intrigued about as well, especially in National Two.

National Two North contains eight teams from the county of Yorkshire who may well want to emulate Hull’s success of last year whilst in the East and West, some of the oldest clubs in the world – Blackheath and Clifton – will be pitting their wits against the likes of newcomers North Walsham and Exeter University throughout the season.

That element of the unknown just adds another drop of excitement heading into the campaign.

After being scrapped last term, relegation from National Two has also been reintroduced to keep things interesting but those who were battling towards the top in 2021-22 will have evaluated their progress and will be keen to have another crack at promotion this time around.

In National One, Sale FC and Rosslyn Park will surely start as two of the title favourites after strong campaigns whilst it wouldn’t be unexpected to see Rotherham Titans, Sedgley Park and Fylde towards the gold medal position in National Two North.

The aforementioned Blackheath and Tonbridge Juddians – who dropped out of the third tier– will be hoping to bounce back in National Two East but they will have stiff competition from Worthing Raiders who narrowly missed out on promotion last year. Henley Hawks will also be lurking.

Considering the variety in National Two West, this is the trickiest division to call. With clubs stretching from the Midlands down to Cornwall, sides like Stourbridge, Redruth and Clifton stand out but a cluster of teams including Leicester Lions and Dings Crusaders ended last year very strongly.

The here and now and the 80 minutes of rugby is what everyone is looking forward to but the RFU hope their decision to “flatten” the rugby pyramid will have a wider impact on the sport, especially around the levels of participation in the adult men’s game.

“After a lay-off due to Covid, it was always going to be tough,” Steve Grainger, the RFU’s director of rugby development says. “Getting players back, getting matches played was the major priority. We did see a decline, sadly, in the adult male game in terms of the number of matches being completed.

“We know where some of those challenges around participation are now. Trends are changing and sport is changing. Team sport gets affected quite hard by that so a lot of what we are hearing from players is that they want to play more locally, they want to play less often. It is a foolish sport which ignores that. We must keep modifying our offer to make sure we are delivering the diet of rugby that our players want.”

Following all the trepidation which surrounded the start of last season, in the end, 2021-22 proved to be one of the most entertaining campaigns to date. With a new look to proceedings this year, National League Rugby is ready to go again.