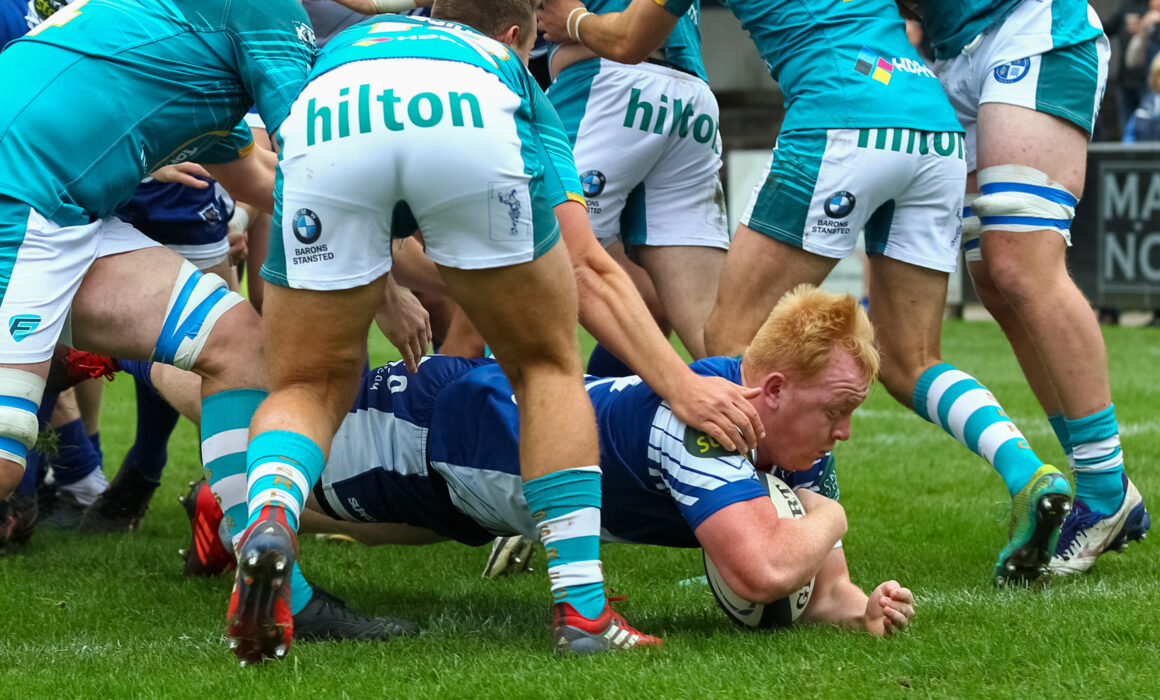 Despite the UK being hit by Storm Eunice, National League Rugby soldiers on with another exciting weekend in store at the summits of both National One and National Two North. Photo Credit: (Gareth Lyons)

This fixture schedule keeps serving up some almighty clashes. Just as another top of the table battle in National Two South is ticked off, one more comes along in the third tier.

Sale FC welcome a Rosslyn Park side that once again had their promotion wings clipped in Round 20. After falling short at the end of January against Bishop’s Storford, the league leaders were beaten by Rams RFC last weekend meaning their advantage at the summit has been reduced to seven points.

As for Sale, they sit third in the table after a pulsating 13 try thriller with Taunton Titans in their most recent fixture. Jonathan Keep’s side came out on top – clinching a 50-40 win – meaning they return to Heywood Road for the first time in over a month with four successive victories under their belt.

9⃣ points separate @SaleFC and @rosslynpark heading into this weekend.

As the #Nat1 title race continues to enthral, this week's key game on the National League Rugby Review Show should be a corker 🍾

They are now just two points behind second-placed Caldy who host another team in the promotion picture, Cambridge, on Saturday so with that in mind, it could be another gripping weekend towards the top of National One.

Keeping a close eye on proceedings will be Cinderford (4th) who visit a Leeds Tykes side scrapping it out at the foot of the division whilst elsewhere, a resurgent Rams RFC (6th) – who have won five of their last six – entertain Bishop’s Stortford at Old Bath Road.

With table toppers Hull not in action this weekend after their fixture was postponed against Huddersfield, the onus will be on their rivals to keep winning if they are to catch the league leaders. However, the problem for Fylde (3rd) and Sedgley Park (4th) is that both won’t be able to taste victory on Saturday as two of the chasing pack collide at Woodlands.

The hosts have won all nine of their fixtures on their own patch, slaying fellow promotion hopefuls Rotherham Titans and Stourbridge en route to that pristine record. Chris Briers and Alex Loney’s men have also picked up six victories on the spin so confidence will be oozing in Lancashire.

In terms of Sedge, a 31-0 win over Blaydon last time out means it is now six triumphs from their last seven games and the Tigers are just two points behind their opponents on Saturday with two games in hand. With the final months of the season coming into view, whoever comes out on top in this one will keep their title bid alight.

It was a win for @SedgleyTigers at Park Lane yesterday as they beat @BlaydonRFC 31-0 in @Natleague_rugby #Nat2N to keep their promotion ambitions alive. RVR was at the game and caught up with Tigers' captain Matt Riley @sedgleytruck shortly after the final whistle. pic.twitter.com/nFhRcnWl0W

Rotherham Titans (2nd) can close the gap to Hull to seven points if they were to pick up their third maximum on the spin when they visit Luctonians in Round 21 whilst Stourbridge (5th) host Harrogate.

Elsewhere, Hull Ionians take on Wharfedale,  Loughborough Students go to Chester and Bournville travel to Blaydon. Sheffield Tigers against Tynedale has been postponed due to adverse weather conditions.

The trip home from Bristol last weekend would have been a lively one for Redruth who moved to the top of National Two South following their triumph over promotion rivals Clifton. Nigel Hambly’s side kicked off a pivotal couple of weeks in the perfect manner because after this Saturday’s meeting with Westcliff, they go to second-placed Esher to conclude the month.

The Reds currently hold a three-point lead at the summit, but Esher have a game in hand so stretching their unbeaten run to six matches will be crucial in Round 21. On paper, this should be a formality for the home side but bottom of the table Westcliff have certainly improved since the end of last month. Six points from their last three games emphasises this point for a side who have been hit by injuries this term, but it would take something remarkable if the men from The Gables were to come away from Cornwall with just their second victory of the campaign.

After Esher saw their 12-match winning run come to an end against Henley Hawks last time out, Peter Winterbottom’s troops will be keen to get back on the horse at the first attempt against Hinckley this weekend whilst Clifton (3rd) will be aiming for the same outcome when they visit Old Albanian.

Elsewhere, Worthing Raiders’ excellent run of six wins on the trot has seen them quietly close in on the top three and the Sussex outfit will want to continue their momentum away at Barnstaple. Meanwhile, Henley Hawks host Guernsey Raiders, Leicester Lions welcome Canterbury to the Midlands, Bury St Edmunds go to Barnes and Dings Crusaders take on Rochford Hundred.

To end this week’s preview, it has been really heartening to see so many of our clubs retiring their No.11 jerseys for weekend in memory of Evesham Rugby Club’s Jack Jeffery who sadly passed away last Saturday. Our thoughts are with Jack’s family, friends, and teammates.