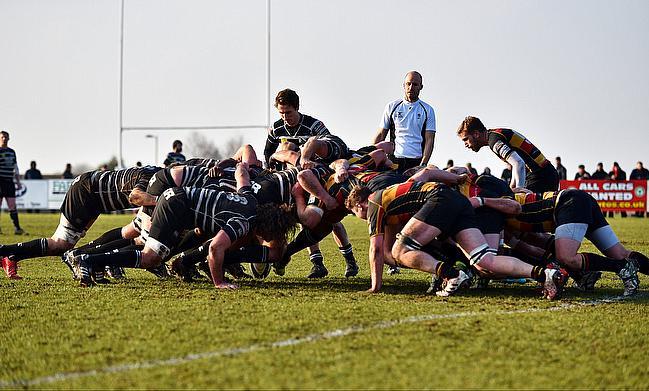 As we conclude the first month of the season, for some, it maybe a surprise to see Cinderford and Chinnor leading the way in National One and the newly promoted teams clash this weekend at Dockham Road.

Last Saturday, Cinderford went to the top of the tree after securing their third win on the bounce, but they are level on points with Chinnor after Matt Williams’ side suffered their first loss of the campaign against Caldy.

Caldy, themselves, are currently sitting in third place going into the final weekend of September and they may have one eye on proceedings between the top two when they host Esher.

Elsewhere in National One, Rosslyn Park will be aiming for back to back victories when they visit Darlington Mowden Park, Old Elthamians host Birmingham Moseley and Blackheath travel to Ampthill and District.

Also, in Round Five, Sale FC go to Rotherham Titans, Plymouth Albion visit Cambridge and Loughborough Students take on Bishop’s Stortford as they go in search of their first win of the season.

Not many followers of National One would have predicated that Cinderford and Chinnor would be top of the pile heading into the final weekend of September. Both of these sides were promoted from National Two South in 2017/18 and both have made superb starts to the season. The hosts, Cinderford, went to the summit of the division last weekend following a superb performance against Loughborough Students.

Paul Morris’ side have now won their last three games while Chinnor saw their three-match unbeaten run come to a halt in Round Four. Matt Williams’ men suffered their first loss of the campaign at home Caldy, but now they have the chance to bounce straight back against their old foes this weekend. The Black and Whites were the only side to beat Cinderford in National Two South last season and that victory did come in this corresponding fixture nearly a year ago. Will it be the same outcome again on Saturday?

Last season, Caldy would have been extremely satisfied with their performance in their first ever term in National One. Avoiding relegation was a mission complete for the Wirral outfit and the way they have begun this campaign suggests Simon Verbickas’ side are only focused on progressing up the division.

The men from Paton Fields have won three of their first four games – including last weekend’s triumph over early pacesetters Chinnor – and with the Oxfordshire side taking on league leaders Cinderford in Round Five, Caldy have the chance to move into top spot if they can beat Esher this Saturday. As for the visitors, they will travel up from Surrey after claiming their first win of the season against Cambridge in Round Four. Ricky Nebbett’s side have won just three of their last 16 away fixtures so they will be hoping a triumph on the road is just around the corner.

After losing out to Rotherham Titans in Round Three, Rosslyn Park responded brilliantly as they ended Old Elthamians’ unbeaten start to the season. Kieran Power’s side were excellent in victory last Saturday and as the first month of the campaign concludes, Park have won three of their four fixtures and sit just two points off the top.

Rosslyn Park may have expected to be jostling alongside Darlington Mowden Park at the right end of the table, but their hosts on the weekend have had a mixed start to the term. After finishing second last year, DMP begun this season with back to back wins, but successive defeats against Old Elthamians and Blackheath leaves them in ninth place at this early stage of the campaign. However, both of Darlington’s aforementioned losses have been away from home and at the Northern Echo Arena, Danny Brown’s side have won 15 of their last 16 matches so they will be keen for that superb record to continue this weekend.

Old Elthamians saw their winning start to the campaign come to a halt in Round Four as they were beaten by Rosslyn Park. OEs had picked up impressive wins against Rotherham Titans, Blackheath and Darlington Mowden Park, but they were undone last weekend and now Gavin Lach and his side will be aiming for a response when they welcome Birmingham Moseley to College Meadow.

Things were looking glum for Moseley after three rounds of action. Consecutive defeats against Caldy, Cinderford and Bishop’s Stortford was far from ideal for Richard Protherough’s side, but last Saturday, Adam Caves came to the rescue. On his return to Billesley Common, the hooker scored all four of Moseley’s tries as the Midlands outfit saw off Rotherham Titans to secure their first victory of the season. Can Moseley now back up their maiden win with a first away triumph since March?

It wasn’t pretty, but Blackheath would have been very happy with the outcome at Well Hall last weekend. James Shanahan’s side battled to a 15-0 win over Darlington Mowden Park and ‘Club’ now sit sixth in the table after three wins from their opening fixtures. Blackheath have had really positive campaigns over the last couple of years and this term, they may feel as if they can take the next step and really challenge for the top positions.

A win this weekend over Ampthill and District would be a statement of their intent considering the A’s have finished above Blackheath for the last three seasons. In terms of Ampthill, they will be keen to respond in front of their own supporters in Round Five. Head Coach Paul Turner described his side’s execution as ‘dreadful’ after their defeat to Plymouth Albion last weekend which means the Bedfordshire outfit have made a 50 per cent start to the new campaign. But, like a couple of other teams in the division, both of their victories thus far have come at Dillingham Park and a hat-trick of wins this Saturday would be the perfect way to end the month.

Rotherham Titans and Sale FC were separated by a division last season, but now both are preparing to go toe-to-toe in National One this weekend. Newly promoted Sale arrive at Clifton Lane on the back of another brilliant home performance. Jonathan Keep’s side proved to be too strong for Bishop’s Stortford as the Manchester-based club bounced back from their Round Three defeat to Cinderford, with a victory at Heywood Road which leaves them eighth in the table.

Sale’s record on their own turf has been remarkable over the last couple of years and now they will be keen translate those performances on their travels, beginning with their trip to Rotherham. In terms of the Titans, they were relegated from the Championship in 2017/18 and it has been a tough start to life at this level for Joe Barker’s men. The head coach was less than impressed as his side lost their third game of the season away at Birmingham Moseley last weekend so he will be demanding a response from his side against Sale as they look to conclude a difficult month on a high.

Head coach Kieran Hallett said his side would ‘enjoy’ their win over Ampthill and District in Round Four after a hard-fought victory at Brickfields. Last season’s bronze medallists have not hit the ground running following back to back home defeats, but victory on their own turf last Saturday would have been a welcome result for Albion who travel to Cambridge this weekend.

Cambridge entertain Plymouth at Volac Park following a disappointing loss away at Esher. The Blood and Sand are still adapting to life under new Director of Rugby Richie Williams and a defeat last weekend would have frustrated the Welshman and his players. Back on home soil where Cambridge are yet to win this term, the hosts will be hoping to return to winning ways in Round Five after successive losses.

Two of the current bottom three sides meet in Round Five as Bishop’s Stortford host Loughborough Students with both teams desperate to spark their season into life. Stortford thought they had ignited their campaign after a thumping win over Birmingham Moseley in Round Three, but instead, they fell to their third loss of the season away at Sale FC last weekend.

Stortford now have an opportunity to end September on a positive note when they take on a Loughborough Students side low on confidence. Alan Buzza’s men are the only team in the division yet to register a victory and in fact, Loughborough have lost their last six matches – a run which stretches back to last season. The Students are five points behind 13th place Birmingham Moseley at this early stage of the campaign, but they will be keen to get off the mark as quickly as possible otherwise their gap to the safety spots could increase.