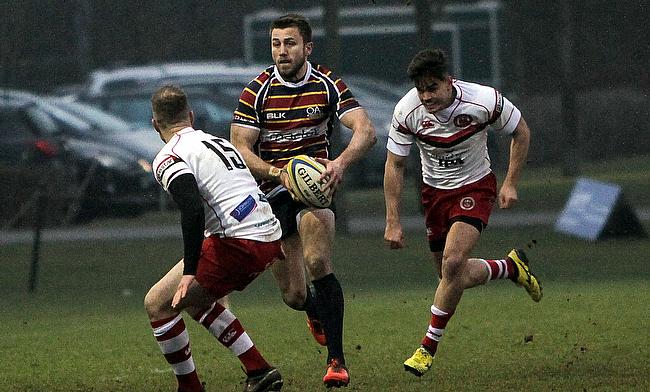 The National One survival battle will be under the microscope as we begin the final month of the campaign with teams fighting for crucial results with four matches to go.

The likes of Old Albanian, Loughborough Students and Hull Ionians are all aiming for a spot in this division next season while Rosslyn Park and Esher are not out of the woods just yet.

As things stand, Old Albanian and Loughborough occupy the final two spots in the relegation zone so both will be aiming to begin April with victories against Caldy and Esher respectively.

In terms of Hull Ionians, they are two points clear of the drop zone and they face a tough task at home to Plymouth Albion while Rosslyn Park travel to newly crowned champions Coventry.

It has been a month since Coventry were crowned champions of National One, but it is safe to say Rowland Winter’s side have not let their standards slip. Three excellent victories over Old Elthamians, Cambridge and Plymouth Albion mean the newly crowned champions welcome Rosslyn Park to the Midlands having won their last nine matches. Cov have also not lost at Butts Park Arena for 24 matches and it is clear that they want to carry their momentum into the Championship.

As for Rosslyn Park, they come into this fixture currently 10 points clear of safety but with a game in hand. Kieran Power’s side are very nearly safe as we enter the final month of the season, but Park are fully aware of their tough run-in. Along with Coventry, they also have to face Plymouth Albion but, their recent performance against Ampthill and District plus a win over second placed Darlington Mowden Park suggests Park are up to the challenge as they go in search of their first away win for just under three months this weekend.

Ampthill and District and Darlington Mowden Park will do battle in Bedfordshire in Round 27 as the fight for the silver medal spot in National One continues. The visitors are currently six points clear of Ampthill and 13 ahead of fourth placed Plymouth Albion who have two games in hand. Danny Brown’s side have recovered well since back to back defeats against Coventry and Rosslyn Park and a fourth victory on the spin at Ampthill would move them a step closer to second place.

In terms of the A’s, they come into this game having lost just one of their last 12 fixtures. Paul Turner’s side have not suffered a defeat in four months and they are once again on course for another top three finish since their promotion back in 2014/15. Ampthill have lost just once on their own turf this term – against Cambridge back in October – so another triumph in front of their own supporters keeps them in the hunt for the runners-up position.

Plymouth Albion may have one eye on the fixture between Ampthill and Darlington as they try and clinch a successive second place finish. Kieran Hallet’s side are currently seven points off the top three with two fixtures remaining and once again, their recent fixture with Loughborough Students was postponed. It was more frustration for the men from Brickfields, but they will eager to get back to action and return to winning ways on the road. Albion have lost their last two matches on their travels against Coventry and Ampthill which has dented their top two ambitions, but they may fancy their chances of bouncing back against a struggling Hull Ionians side.

Winger Sam Wilson told us this week that his side do have the belief to stay in National One for another term. As things stand, Hull Ionians are three points clear of the drop but their nearest rivals, Loughborough Students who sit in the relegation zone, have that aforementioned game in hand against Plymouth Albion. The I’s also have to face Ampthill and Coventry before the end of the month so home performances will be key – as they have been all season. Hull have won eight games this term, seven of which have come at Brantingham Park.

Blackheath fell to a defeat in horrendous weather conditions over the Easter weekend as they were beaten by Bishop’s Stortford. The loss would have dampened their momentum towards securing a fifth placed finish and they welcome Cambridge to Well Hall this weekend looking react and also stretch their unbeaten home record to seven matches.

However, that task won’t be straightforward as Cambridge travel to London in a buoyant mood. The Blood and Sand have had a brilliant couple of weeks as wins against Old Albanian and Hull Ionians has moved them 15 points clear of the drop zone. Director of Rugby Ross Stewart targeted those two games and now Cambridge are all but safe for another year of National One rugby. Consecutive wins was exactly what Cambridge needed after a tough run of form and they will be aiming to continue their strong finish to the season at Well Hall.

Old Elthamians travel to Birmingham Moseley this weekend hoping for a drier and more successful afternoon. Gavin Lach’s side were beaten by Ampthill and District on Good Friday in atrocious weather conditions and with Birmingham Moseley just two points and one place behind OEs, a positive result this weekend would keep them on course for a more than credible top half finish in their first ever season at this level.

While OEs faced Ampthill last week, Birmingham Moseley battled against the British Army at Billesley Common. Richard Protherough gave opportunities to a number of his fringe players as his side slipped to a 57-0 defeat and now the Midlands club return to National One action aiming to react from their last league encounter. Moseley were edged out by Caldy which halted their charge towards a top five finish so they will be hoping to secure their seventh home victory of the season in Round 27.

Since a defeat to Old Albanian in the middle of February, Bishop’s Stortford’s Director of Rugby Andy Long has been pleased by his team’s attitude and response. The men from Silver Leys have won two of their last four games, including a hard-fought win in terrible weather conditions against Blackheath last week, to keep their hopes of a top eight finish alive.

Next on the agenda for Stortford is a home fixture with already relegated Fylde, but the hosts will be out for revenge after losing to Warren Spragg’s side in the first half of the season. In terms of Fylde, their plans for their campaign in National Two North are well and truly in motion as more players signed deals at Woodlands this week. The likes of Tom Grimes and Chris Briers will be plying their trade for the Lancashire side next season, but the current crop of Fylde players will want to end their time at this level on a high note, starting with this weekend’s trip to Hertfordshire.

Caldy may well be heading into their final four games of the season with smiles on their faces. After promotion to National One this time last year, Simon Verbickas’ side have more than held their own at this level and  a top eight finish could be on their radar. A late and dramatic home victory last time out against Birmingham Moseley leaves them 10th in the table and six points off the top half. A fourth away win of the campaign would continue their superb maiden term in this division.

The Wirral side are all but safe for another season in National One, but that cannot be said for their hosts, Old Albanian. OAs are still fighting for survival as we begin the final month of the campaign and Gavin Hogg’s side currently sit seven points from safety. However, three wins from their last four matches has significantly boosted their chances of beating the drop and another victory at Woollams this Saturday would keep them in the mix for finishing outside the bottom three.

There were a number of positives which Esher can take into Round 27. The Surrey-based side were excellent in their 18-16 defeat away at Darlington Mowden Park over the Easter weekend and a similar sort of performance in a crucial battle against Loughborough Students this Saturday could be vital. As things stand, Esher are 11 points clear of the bottom three and a win over relegation threatened Loughborough would leave them nearly home and dry.

As for the Students, the final month of this season will be a testing time for them. The Midlands club currently sit three points off safety, but they do have a game in hand against Plymouth Albion after their game was called off last weekend. Alan Buzza’s side have drawn three of their last six matches and they need to turn those stalemates into victories as they go in search of a pivotal first win since January at Molesey Road this weekend.