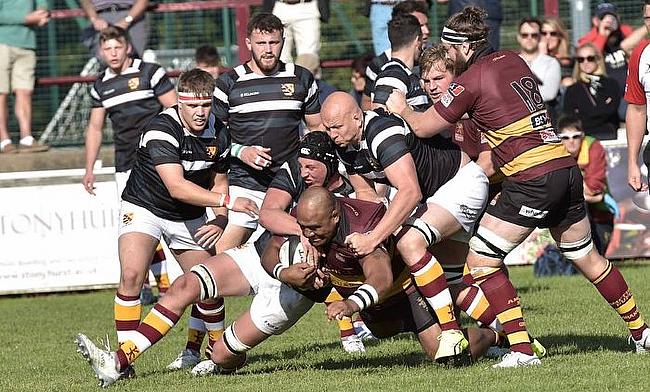 We look ahead to the 2018/19 season in National One and assess all 16 teams bidding for positive campaigns.

On reflection, it did seem like history repeated itself in National One last year. Much like in 2016/17, we had a runaway leader whilst the battle to avoid the drop went right to the wire.

Hartpury romped to the league title two seasons ago and Coventry followed suit last term. Rowland Winter’s side hardly put a foot wrong on their way to securing promotion to the Championship leaving the chasing pack in their wake.

At the wrong end of the table, Loughborough Students, Rosslyn Park and Hull Ionians were still fighting for survival on the final day of the campaign, but it was the latter who suffered relegation back to National Two North.

So, what to expect this year – Will we see the same again in terms of a precession at the summit and drama at the bottom? From a journalistic and neutral point of view, a strong title race would be desirable.

Darlington Mowden Park, Plymouth Albion and Ampthill and District – three of the top four last year – did look a level above the rest.

DMP were one of the surprise packages and with some intriguing signings moving to the North East this summer, can Danny Brown’s men take the next step?

From an outsider looking in, Plymouth and Ampthill may well be favourites for top spot. For Albion, Kieran Hallett is guiding the men from Brickfields in the right direction and back to back third placed finishes suggests this could be the year that Plymouth make their return to the Championship.

In terms of Ampthill, they are continuing to improve. Under Mark Lavery and Paul Turner, the Bedfordshire club have finished in the top four for the last three seasons since their promotion from National Two North and with the likes of Soane Tonga’uiha moving to Dillingham Park, they could really challenge for the title this term.

But the three aforementioned clubs will be wary of the side coming down from the Championship; Rotherham Titians.

The Titians’ 14 year-spell in the second tier came to a disappointing end last season, but with former player Joe Barker now at the helm and a whole host of new faces arriving at Clifton Lane, the immediate goal for the Yorkshire club has to be a return to the Championship.

Blackheath may fancy their chances of gate crashing the favourites party and to do so, they are going have to make the perfect start to the season. Last year, James Shanahan guided ‘Club’ to a fifth placed finish in his first season in charge, but they begin this term with fixtures against Esher, Darlington, Plymouth and Ampthill so the opening month of the campaign could shape their fortunes.

Birmingham Moseley may well have the same ambitions as Blackheath, especially after a transition year last term which saw them finish in seventh place. Their pre-season has been tough with fixtures against Coventry and Worcester Warriors, but Director of Rugby Richard Protherough is pleased he has been able to hold on to his main players as well as promoting youth at Billesley Common. Can they now mount a serious promotion challenge?

This time last year, Old Elthamians, Bishop’s Stortford and Caldy were the new teams to the division and they all had thoroughly successful campaigns in National One. OEs performed superbly to finish in sixth place and they could well be harbouring thoughts of a top four finish, especially after recruiting some exciting talent including Ben Howard from Worcester.

As for Stortford, Andy Long’s side ended the campaign bang in the middle of the table. A positive first half of the season was followed by a mixed end to the term so the men from Silver Leys will be aiming to find some more consistency to help them build on what was a positive year.

Caldy would have been pleased with their 10th place finish in 2017/18 and in truth, they rarely looked like being dragged into a relegation battle. Simon Verbickas continues to do fine work at Paton Field and the Cheshire side will be looking to cement their position in National One this season.

Elsewhere in the division, the feeling of optimism may be surrounding teams such as Esher and Cambridge. The former have brought in some new faces this term and their exciting talent in the backs could see the Surry based-side cause teams a lot of problems, but key for Esher, is maintaining their consistency.

For Cambridge, it is the start of a new era once again. After the departure of Ross Stewart, Richie Williams has taken the Director of Rugby role at Volac Park and he brings a lot of experience with him. The former England Counties, Belgium and South Leicester coach will be hoping he can take the Blood and Sand to the next level after two years of stabilising themselves in this division.

Rosslyn Park and Loughborough Students were on the road of relegation last year, but they will be desperate not to tread down the same treacherous path this time around. For Park, they will want to return to challenging at the right end of National One while the Students will be keen to push towards the mid-table spots.

And last, but certainly not least, let’s focus on the newly promoted sides in National One.

We begin with National Two North champions Sale FC who are currently one of the most ambitious sides in the country. After narrowly missing out on promotion to National One in 2017, there were no such problems for Jonathan Keep’s side last season as they clinched the title thanks to a run of 23 straight wins and a superb defensive record. In addition, their growing partnership with Sale Sharks shows that the men from Heywood Road may well be targeting more than just survival this term.

Sale were the sole side to be promoted from the North meaning both Cinderford and Chinnor booked their places in National One via National Two South. Cinderford made a return to the third tier after a two-year absence and Paul Morris’ side were pretty much faultless. 29 wins from 30 matches saw the men from Dockham Road coast to the title and some interesting signings such as George Boulton from Hartpury, plus the growing link between themselves and Gloucesterm could see Cinderford really challenge.

Similarly to Sale, Chinnor suffered heartbreak in 2017 as they fell just short of a top two spot but last season, they bounced back. Defeats around the Christmas period threatened to derail their promotion hopes, but Matt Williams’ side held their nerve to secure a play-off spot and a tie against National Two North’s Sedgley Park.

In the end, the Black and Whites produced a classy performance to clinch their spot in National One for the first time in the club’s history and things continue to bubble nicely at Kingsey Road. With Williams signing a new contract last month and some quality players arriving in Oxfordshire, Chinnor will also fancy their chances of steering clear of trouble.