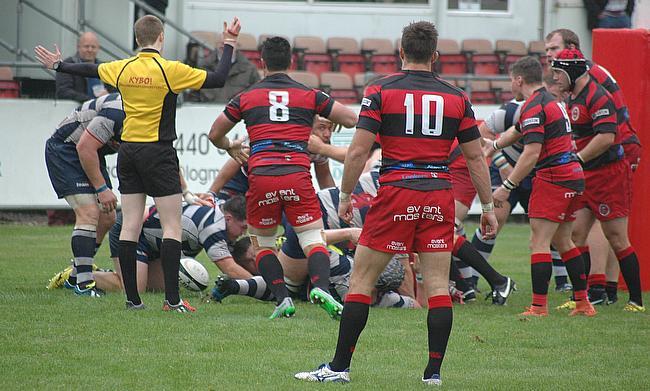 Quite rightly, the first two months of this season have been dominated by the swapping and changing of the league leaders in National One, but this week, the attention is on the wrong end of the table.

Four of the bottom five sides face one another in the final weekend before the first break in the season so expect fireworks when Cambridge host Bishop’s Stortford and Birmingham Moseley entertain Loughborough Students.

At the summit of the division, it couldn’t be closer between league leaders Old Elthamians and second placed Rotherham Titians so both sides will be aiming to continue setting the pace when they travel to Plymouth Albion and Ampthill & District, respectively.

Third placed Blackheath are just one point behind the top two and ‘Club’ take on Sale FC this weekend while fellow promotion candidates Rosslyn Park and Chinnor meet in Oxfordshire.

After Round Nine, Old Elthamians’ club website quite rightly claimed that this National One season is the most open for years. Gavin Lach’s side currently lead the way in this fascinating campaign as they returned to the summit of the division following a solid victory over Esher at College Meadow. OEs are level on points with second placed Rotherham Titans, but they are in pole position by virtue of ‘Games Drawn’ as both sides have won the same amount of matches. The Mottingham Club will be going for win number seven on Saturday, but standing in their way are Plymouth Albion.

THIS SATURDAY ??|
The longest, and one of the best, awaydays of the season at @AlbionRFC (ko 3pm).#TogetherweareElthamians pic.twitter.com/yajijP7NS7

The hosts are continuing to have a frustrating season. A defeat against the aforementioned Rotherham last weekend kept Kieran Hallett’s side in the bottom half of the table as inconsistency continues to plague their progress. However, a positive for Plymouth heading into Round Nine is that they have won their last three matches at Brickfields so they will be keen to add to that total as they kick off November.

The first break in the season occurs next weekend, but Rotherham Titans will be in no mood to put their feet up. Joe Barker’s men made a spluttering start to life in National One after relegation from the Championship, but the Yorkshire outfit are now firing on all cylinders. The Titans head into Round 10 having won their last five matches and they are most certainly the form side in the division as things stand.

Rotherham are also level on points with Old Elthamians, but they face a tough assignment against Ampthill and District this weekend. The A’s are sitting seventh in the table, but they are just three points off their visitors as they welcome them to Dillingham Park. Ampthill secured back to back wins to round off October which pleased the Bedfordshire club and a third victory in a row could see Mark Lavery and Paul Turner’s side leapfrog the Titans in the league standings.

Like Rotherham, Blackheath are motoring on. ‘Club’ won all four of their fixtures in October and head into this month firmly in the promotion hunt. James Shanahan’s side overturned Caldy last week and their latest victory leaves them in third place and just a point behind the top two in National One.

The men from Well Hall are back on their own turf this weekend and they entertain a Sale FC side who will be keen to end a mini blip in form. After an outstanding victory over Darlington Mowden Park in Round Seven, Jonathan Keep’s men have slipped to back to back defeats against Rosslyn Park and Birmingham Moseley. On the flip side, Sale may well be satisfied with the progress they have made in their maiden National One season. Currently, they sit seven points clear of trouble and a second away win of the term would be the ideal way to enter the first break in the campaign.

Rosslyn Park racked up their third consecutive win in Round Nine as they battled to a victory against Loughborough Students at the Rock. Having led 29-3, Loughborough fought their way back into the contest, but Park held their nerve to move up to fourth place in the National One league standings.

Kieran Power’s side are just two points behind league leaders Old Elthamians and a fourth win on the trot could see them move to the summit, if other results go their way. The challenge which faces Park this weekend is a trip to Chinnor and they currently occupy sixth place in the table. Matt Williams’ side concluded last month with a welcome victory as they snatched a narrow win over Darlington Mowden Park to continue their excellent debut season at this level. The Blacks and Whites are now back at Kingsey Road this weekend and on Saturday, they will be keen to pick up their first home victory since the middle of September.

With the top of National One being as tight as it is, Caldy’s defeat against Blackheath last Saturday saw the Wirral side fall from the summit, down to fifth position in the league standings. Simon Verbickas’ side suffered their first home loss of the season in Round Nine so they will be looking for an immediate response at Paton Field when they host Cinderford this weekend.

Caldy are just three points off league leaders Old Elthamians while Cinderford enter this clash having moved into the top half of the table to conclude October. Paul Morris’ men edged their way past Cambridge to clinch their second home victory on the bounce and their fifth win since promotion back into National One. The Foresters now take the trip north in search of their first triumph on the road since beating Loughborough Students in Round Four.

Darlington Mowden Park will be keen to return to winning ways when they visit Esher this weekend. Danny Brown’s side suffered a late defeat against Chinnor in Round Nine which only added to DMP’s patchy form this season. The North-East club sit ninth in the table and head to Surrey having lost their last three matches so a win to begin November would be just the tonic DMP are after.

As for Esher, they remain in the bottom three after falling to a 22-10 defeat against league leaders Old Elthamians last Saturday. Rickey Nebbett’s side looked as though they were starting to build some momentum at the beginning of October, but two straight wins have been followed by successive defeats. Now back at Molesey Road, can Esher spark their season back into life with a victory over Darlington?

Last Saturday, Cambridge braved the elements in Cinderford, but they couldn’t warm their cockles as they fell to a narrow defeat at Dockham Road. The Blood and Sand were once again frozen out and it is now three straight losses for Richie Williams’ side as they prepare to entertain Bishop’s Stortford in Round 10.

Cambridge are just four points clear of the danger zone in National One while Bishop’s Stortford find themselves just two points above the trapdoor. Andy Long’s men have also suffered three defeats on the spin ahead of this encounter at Volac Park so both sides will want to head into the first break of the campaign with a welcome victory under their belt.

It has been quite the week for Birmingham Moseley. The Midlands side secured their second win of the season against Sale FC on Saturday and they also announced Collin Osbourne as their new head coach at Billesley Common. The former Moseley player has replaced Simon Cross and will work alongside Director of Rugby Richard Protherough as they look to guide the club out of the bottom three.

??? LOAN NEWS | Academy trio to play for @MoseleyRugbyFC at @LboroRugby

Last weekend’s victory over Sale has left Moseley just two points from safety and they have a real chance to move out of the relegation places in Round 10 when they travel up the M42 to face Loughborough Students. The Students currently prop up National One as things stand, but Alan Buzza’s side are showing shoots of recovery. After clinching their first victory of the season against Darlington Mowden Park in Round Nine, the Students did fall to a defeat at Rosslyn Park last Saturday, but six of their nine points have come in the last two weeks. With a fellow rival to come this weekend, Loughborough also have a great opportunity take a step forward towards the safety positions.