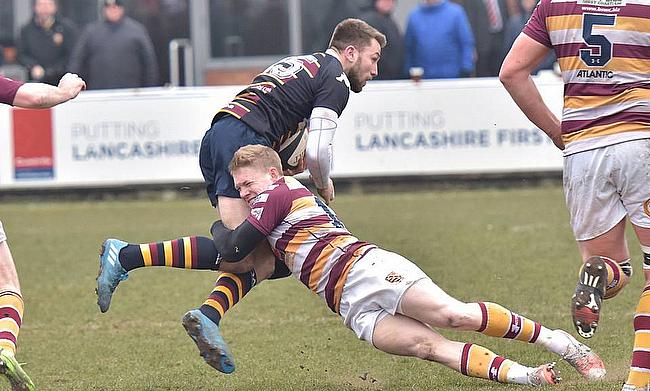 Old Albanian claimed a crucial victory against Fylde to keep their hopes of staying in National One alive on a weekend which saw just three National League matches take place.

After the severe snow which hit the country, two games in National One survived while there was only match in National Two South which went ahead.

Birmingham Moseley scored twice in the final 10 minutes as they came from behind to edge past Loughborough Students in a nine-try thriller.

The away side trailed 13-7 at half-time in the Midlands thanks to a Jack Moates try and two penalties, while Ciaran Moore crossed for Moseley.

Both sides exchanged tries after the break as Sam Smith’s effort was cancelled out by Charlie Kingham, but Loughborough went 25-14 ahead through Tim Bitirim.

Great to get the win today and a rare meat pie, boys were outstanding and thanks to the @MoseleyRugbyFC fans who made the danger journey #howdyoulikethemapples #byapplesimeansnow ????

However, Moseley then found themselves in front heading into the final 10 minutes as Tom Fidler and Ryan Roach crossed to give the away side a one point lead.

Their advantage was short lived as Oskar Hirskyji-Douglas finished excellently, but there was to be one final twist in the tail as Jacques Le Roux went over to win it for Moseley.

Victory for Moseley has lifted them to seventh in the table, while two bonus-points for Loughborough has moved them out of the bottom three.

Old Albanian have given themselves hope of avoiding relegation from National One after battling back to secure a vital victory over Fylde.

First-half tries from Harry Elbrow, Andrew Christie and Ross Hamilton gave OAs a five-point lead after they had fought back from two early scores via Tom Carleton and Adam Lewis.

Fylde went back in front after the restart as David Fairbrother crossed, but scores from Dom Morris and Nick Foster secured a crucial with for OAs which now leaves them seven points from safety.

As for Fylde, this was their 11th home loss of the campaign and with six games in their season left to play, the division’s bottom club are 26 points from safety.

Wimbledon’s fight for survival in National Two South suffered a blow in Round 24 as they were outmuscled by a clinical Redingensians at Maidenhead RFC.

A first-half try from Connor Stapley gave the hosts a slender 5-3 lead, while James Doe landed a penalty for the Dons in a very cagey opening 40 minutes.

But, the second half sparked into life as a try from Oli Cole and brace via Tom Vooght put the Rams 21 points ahead

ICYMI – Final score for Rams V Wimbledon. The only game to go ahead in @nca_rugby nat2s! Well played @wimbledonrfc and good luck with the #GreatEscape. pic.twitter.com/I1l4s7c1Ut

The visitors did fightback in the final 10 minutes thanks to scores from Jack Flanagan and Alfie Dudman-Jones, but the home side held on to move up to third in the table.

In terms of the Dons, they remain five points from safety, but they have now played a game more than their rivals.