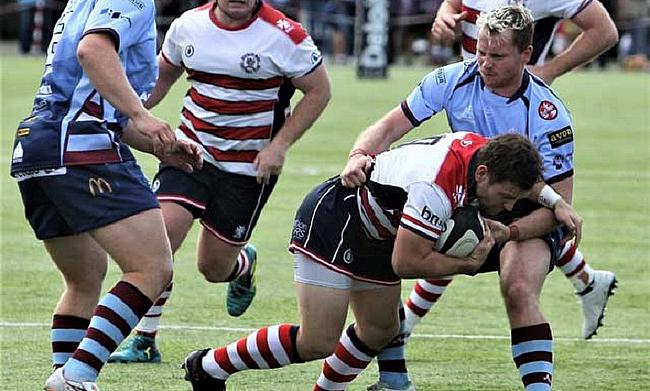 We may only be two weeks into the brand new National One season, but this Saturday has served up some intriguing fixtures which could already set the tone for teams aiming for top spot. Photo Credit: (David Whittam)

After their demolition job against Hull Ionians, Birmingham Moseley currently sit at the summit and Adam Balding’s side travel to newly promoted Rams – who clinched their maiden National One victory on the opening day.

Second placed Cinderford entertain Plymouth Albion as the Foresters aim for two wins from two, but the standout matches come at College Meadow and the Athletic Ground as four potential promotion candidates collide.

Old Elthamians are at home to Rosslyn Park and both teams were in the running for the title last term whilst an exciting and promising Chinnor side visit Richmond, who have recently come down from the Championship.

Elsewhere in Round Two, Bishop’s Stortford will be keen to build upon last weekend’s victory over Plymouth Albion when they welcome Cambridge to Silver Leys, while Darlington Mowden Park and Hull Ionians meet in Yorkshire with both clubs aiming to get off the mark.

Similarly, Canterbury and Blackheath as well as Rotherham Titans and Sale FC will be hoping to kick-start their campaigns on Saturday.

Birmingham Moseley have certainly embraced their changes over the summer after securing a thumping win on the opening day of the season. Adam Balding’s new look side thrashed Hull Ionians 70-16 in a dazzling display which included 11 tries.

It was a scintillating display by Birmingham Moseley and new signing Aquile Smith in Round One, but the flying winger admits the #Nat1 club are not getting ahead of themselves👏https://t.co/qrA2zkM4Xd

The Midlands club travel to recently promoted Rams on Saturday, who also kicked off the campaign with a victory. Seb Reynolds’ men defeated Cambridge 36-32 on their National One debut and having not lost at home since January 2018, the Berkshire club will fancy their chances of making it two wins from two this weekend.

Last weekend, Cinderford began the new campaign on a positive note as Paul Morris’ side picked up all five points away at Sale FC. The Gloucestershire outfit sealed a 46-22 victory at the CorpAcq Stadium and in Round Two, they are back on home turf to face Plymouth Albion.

Ben Gulliver’s men will want to find some inspiration at Dockham Road following their narrow 42-40 defeat to Bishop’s Stortford in Round One, but there was plenty on display last week to suggest Albion can get off the mark on Saturday.

In 2018/19, Old Elthamians and Rosslyn Park finished the National One campaign in second and third place, respectively, and two of last year’s frontrunners meet in the embryonic stages of this term. In Round One, OEs clinched a solid 37-14 victory over Canterbury and they head into this weekend having not lost at home in just under nine months.

However, Park will hold no fear in Round Two after defeating Rotherham Titans 38-19 last Saturday and if they were to get the better of OEs this weekend, it would be an early signal of intent from Kieran Power’s side.

From one big game to another as this weekend, Richmond prepare to host their first National One fixture in just over three years. Steve Hill’s charges left it late to snatch a 40-37 victory over Darlington Mowden Park on the opening day and if they are to fulfil their ambitions of challenging for top spot, a win against Chinnor could be a key piece of the promotion jigsaw.

After a summer of exciting additions, the visitors will also be pushing for first place this term. Matt Williams’ talented side picked up a hard-fought 17-15 victory against Blackheath last time out so this clash at the Athletic Ground has the potential to be an absolute cracker.

Bishop’s Stortford may well be bouncing into Silver Leys on Saturday afternoon after a superb opening day triumph over Plymouth Albion. Andy Long’s men showed massive character to recover from a slow start at Brickfields and now Stortford will be aiming for back-to-back wins when they host Cambridge.

The away side will be eager to chalk up their first victory on Saturday after falling to newly promoted Rams at home last weekend. The Blood and Sand lost 24-6 against Stortford back in March so Richie Williams’ men will be hoping for a better trip to Hertfordshire this time around.

Darlington Mowden Park will have put last Saturday’s heartache against Richmond to their back of their minds this week. Danny Brown’s men were on the wrong end of a pulsating contest at the Northern Echo Arena, but they will want to bounce back immediately against newly promoted Hull Ionians in Round Two.

Throwback to our last game against Saturday’s opposition Hull Ionians – a 26-0 win back in December 2017. #ThrowbackThursday #ComeOnPark pic.twitter.com/qkIIhlgnUC

The hosts’ return to National One couldn’t have gone much worse as they suffered a very heavy loss against Birmingham Moseley on the opening day, but back at Brantingham Park, their target will be to also get off the mark this weekend.

When any team loses their opening game of a new season, it is always a blow but Blackheath can take positives from their defeat in Round One. ‘Club’ narrowly lost out to Chinnor and did find themselves ahead at half-time in that contest so now they will be keen to produce a better all-round performance in order to earn their first win of the campaign on Saturday.

After finishing last year in fourth spot, James Shanahan’s men may have too much for newly promoted Canterbury, but Andy Pratt’s side have a second chance to secure a maiden National One victory in front of their own fans. The City Men lost to one of the promotion favourites Old Elthamians last weekend at the Marine Travel Ground, but is Canterbury’s first ever win in the third tier just around the corner?

Rotherham Titans and Sale FC suffered first day defeats last Saturday so both sides will want to kick-start their respective seasons this weekend.

The Titans were disappointed to lose to Rosslyn Park after a solid first-half display whilst Sale’s home setback against Cambridge is something Jonathan Keep’s side will want to put right in Yorkshire. It is unlikely to be dull at Clifton Lane as both clubs aim to get their opening win on the board.