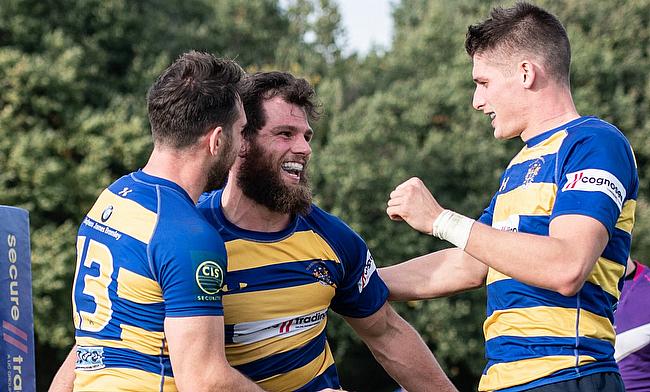 Old Elthamians comfortably defeated Loughborough Students in Round Seven as they moved to the top of the National One table.

OEs, led by Director of Rugby Gavin Lach, have been on an incredible journey and they now find themselves at the summit of the third tier after being in London and SE Premier just four years ago.

Their rise has been remarkable and the same could be said about the teams currently sat in second and third place as Caldy and Sale FC continue to write new chapters in their respective histories after dramatic wins this weekend.

Elsewhere in National One, Rotherham Titans beat Chinnor, Blackheath saw off Cambridge at Volac Park and Cinderford picked up an excellent home win against Plymouth Albion.

Also, Rosslyn Park and Esher both left it late to secure victories over Birmingham Moseley and Bishop’s Stortford.

Old Elthamians put in a commanding display against Loughborough Students at College Meadow to move to the summit of the National One table.

Michael Kovacic’s effort helped OEs into a 10-point lead before Tom White landed a penalty and scored a try to make it 20-5 at the break.

Tries from Kieran Moffat and Fred Hosking (2) ultimately killed off any Loughborough revival, but the visitors did hit back through Will Brown, who added to Owen Lloyd’s first half score.

But Rhys Morgan added a further try to wrap up the win for OEs, while the Students managed to earn a try-bonus point thanks to late scores from Charlie Reed and Callum Watson.

Caldy held off a strong fightback from Ampthill and District to secure a one-point win at Paton Field in a tense National One encounter.

Man-of-the-match Harrison Crowe scored one of two Caldy tries in the first period which helped the hosts to a 12-3 lead at half-time.

Ampthill trailed 19-3 when Lewis Barker dotted down for the home side, but the visitors mounted a serious comeback.

Aleki Lutui went over for the A’s before they pinged over a penalty heading into the final 10 minutes. The Bedfordshire outfit then reduced the deficit to a single point when Jon Kpoku crossed for a converted score on 75 minutes.

However, Caldy were able to hold on to the victory which sees them move up to second in the table.

First half scores from Matt Dudman, Brandon Asher-Wood and Talite Vaioleti put the hosts in command, despite John Leota crossing for Sale.

Great to get our 1st win on the road against a very good @MowdenPark team. We are learning quick in a very tough league, great to finally close a lead away from home. The @SaleFC journey continues #onesalefc

It was first blood to Sale after the break as Chris Johnson landed a penalty, but Joe Craggs touched down to secure a bonus point for DMP early in the second period.

However, the home side would see their 29-10 advantage disappear as Sale produced a quite incredible comeback.

Sale captain Andy Hughes led the revival as he grabbed two tries to cut Darlington’s lead to just five points and with four minutes to go, the visitors completed the turnaround as Nicholas Dolly crossed the whitewash to clinch Sale’s first ever away victory in National One.

Rotherham Titans earned a third National One victory in a row, but they had to survive a fightback to overcome Chinnor at Clifton Lane.

Chinnor fought hard to earn their two bonus points in Yorkshire and the result leaves them fourth in the table while the Titans are up to sixth.

Chinnor’s Alex Dancer and Dan George went over in the first-half and scores via Craig Holland and Reon Joseph in the second period did give the visitors a platform to mount a comeback, but the Titans were able to hang on.

In terms of Rotherham, Alex Dolly, Connor Field (2), Ali Thomson and Ellis Abrahams all touched down for the hosts who are beginning to look like a side that has found their feet in National One.

Blackheath powered their way to a fourth win from their last five games after running in six tries against Cambridge at Volac Park.

Nick Foster’s try put ‘Club’ 29-10 ahead at the break after scores from Jake Lloyd (2) and Andres Nilsson, while Jake McCloud responded for Cambridge.

Tries from Freddie Owen and Jack Daly, either side Mike Ayrton’s effort, ultimately sealed the win for Blackheath with McCloud’s second score merely being a consolation for the Blood and Sand.

Cinderford beat Plymouth Albion in a tight contest at Dockham Road to return to winning ways in National One.

Quick-fire scores from Jack Arnott and Rusi Tuima meant Plymouth led this contest 12-8 at the break after a Dan Pointon penalty plus an Alex Frame try had put Cinderford ahead.

Unbelievable effort in the closing minutes of the game see @cinderfordrfc victorious!!!! pic.twitter.com/Z4q3vNFUd9

Albion were seemingly on the front foot in the early exchanges of the second period, but Cinderford held firm and used their power up front which provided the decisive moment in the game.

The hosts were awarded a penalty try and Paul Morris’s side then stood strong in defence to see out the victory.

With the scores level heading into the final 10 minutes, Macfarlane’s second try was the final action of the match as the home side snatched the victory.

Neville Edwards and Tom Vaughan-Edwards got Park’s first-half scores while Macfarlane’s brace in the second period was enough for Kieran Power’s side to pick up their first win in three matches.

Esher made it two wins from their last three matches in National One as Bradley Clements’ late try secured a bonus-point victory over Bishop’s Stortford at Silver Leys.

The visitors led 14-5 at half-time with Matt Lows and Owen Waters crossing, while Tom Walker dotted down for the hosts.

Stortford made the brighter start to the second period and went in front following scores from Reuben Bird-Tulloch and Matt Tomlinson, but Waters cut the lead to two points after landing a drop goal/

Sam Winter darted under the posts to extend Stortford’s advantage to 26-17, but Esher hit back and weren’t to be denied.

Tom James and Clements both dotted down to put Esher three points in front and despite a late surge of pressure from Stortford, Rickey Nebbett’s side clung on for a rare away win.