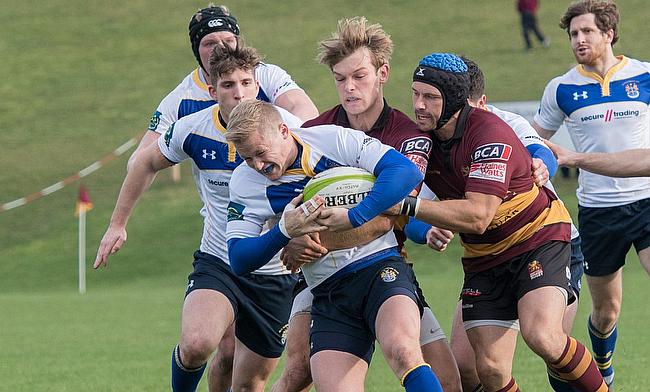 On Saturday, Old Elthamians take on Ampthill and District in a huge clash which could have a significant impact on the title race in National One.

OEs, who are top of the division by virtue of Games Won, will take a major step towards the Championship if they can secure a victory at Dillingham Park.

However, second-placed Ampthill can take control of the title race with a win of their own. Both sides are currently level on 91 points and have won seven successive games so with six matches remaining, the result in Bedfordshire may decide who clinches promotion.

Third-placed Rosslyn Park will be hoping that isn’t the case. Kieran Power’s side sit four points behind the leading duo as they prepare to visit Esher this weekend, while rivals Blackheath host Cinderford.

Down at the bottom, Birmingham Moseley will be looking to continue their push for survival when they travel to Chinnor in Round 25. Richard Protherough’s side secured a vital win over bottom of the table Loughborough Students last weekend and now they are only three points from safety.

Directly above Moseley are Caldy and the Wirral outfit take on Bishop’s Stortford on Saturday while Cambridge will be aiming to distance themselves from trouble when they host Rotherham Titans.

Elsewhere, Darlington Mowden Park take the long trip to Plymouth Albion and Sale FC are up against the aforementioned Loughborough.

They don’t come much bigger than this. Six games to go and only ‘Games Won’ separate league leaders Old Elthamians and second-placed Ampthill and District as the top two collide at Dillingham Park this weekend. Prior to their impressive win over Plymouth Albion in Round 24, OEs Director of Rugby Gavin Lach said it was a ‘huge week’ in the club’s history and after securing their seventh successive victory, they could take a gigantic step towards the Championship if they can triumph in Bedfordshire on Saturday.

It would be the latest chapter in OEs’ incredible recent rise, but the story would still be as special if Ampthill were to take the next step into the second tier. After solidifying their place towards the top of National One since promotion in 2015, this has been the A’s best chance of challenging for the league title. Like OEs, Ampthill have also won their last seven games and victory in Round 25 would see them move to the summit. There is no doubt that this fixture will have a massive say in the promotion race so who can hold their nerve and secure a potentially season-defining win?

Come 4:30pm on Saturday in Surrey, social media feeds and websites will be refreshed continuously. Third-placed Rosslyn Park are still firmly in the title picture and if they complete their own job against Esher in Round 25, all eyes will be on the result between Old Elthamians and Ampthill. As things stand, Park sit four points behind the top two and Kieran Power’s side have kept themselves in the hunt following a run of five consecutive victories.

Their latest win over Chinnor saw them overcome a difficult hurdle between now and the end of the season and their trip to Esher this weekend won’t be a straightforward afternoon for Park. The reason for that is because the home side are fighting for their National One survival. Currently, Esher are nine points shy of safety and at the beginning of this week, the club parted ways with Director of Rugby Ricky Nebbett. Tom Williams has been put in temporary charge until the end of the campaign and following five straight defeats, Williams will be keen to get off to a positive start as Esher look to escape the drop.

After concluding February with successive victories, Blackheath kicked off March in the same manner but they had to grind out their latest triumph against Sale FC. James Shanahan’s side profited from two Sale red-cards to claim a bonus-point win and that result does keep them in the promotion conversation as we approach the final five games of the campaign.

‘Club’ currently sit eight points off the top two and with Old Elthamians meeting Ampthill this weekend, it could be a chance for Blackheath to close the gap if they can defeat Cinderford in Round 25. Last week, Paul Morris’ men had to fend off a Caldy fightback to return to winning ways after losing all three of their matches during February. The Foresters, who gained promotion to National One last April, now sit ninth in the table and a top eight finish is firmly within their reach as we enter the final stages of the season.

As we embark on the final stretch in the National One season, Chinnor chairman Simon Vickers released a statement on the club website. He said how gratifying it has been to see his side ‘quite capable of not just existing, but thriving at this level’ following their promotion last year and that has to be the overriding feeling for the Black and Whites. The fact there might be a slight sense of ‘what if’ after Chinnor found themselves in the promotion race for a large chunk of the term shows the ambition of the club, but now it is all about finishing as high as they can.

@MoseleyRugbyFC Wow! That was close – here’s a try that helped us win! pic.twitter.com/pCNkdDvhT7

Last weekend, Matt Williams’ men fell to a 38-31 defeat away at title chasing Rosslyn Park and they will be up against another side who still have a lot to play for in Round 25. Birmingham Moseley are the visitors to Kingsey Road and the Midlands outfit gave themselves a major shot in the arm last week. Richard Protherough’s side claimed a narrow and welcome win over rivals Loughborough Students and now Moseley are three points from safety with six games to go. The men from Billesley Common now have the platform to avoid the drop and a first away victory since the end of November could see them move out of the bottom three on Saturday.

It has been a frustrating few weeks for Rotherham Titans. After stringing together a very positive run of form before Christmas to keep them in the title race, they have failed to replicate that consistency and now the Yorkshire club will face another campaign in National One. Last week’s loss to Ampthill and District was their third on the bounce so Joe Barker and his side will be itching for a welcome victory when they travel to Cambridge in Round 25.

The hosts suffered a defeat to Bishop’s Stortford last time out which leaves them four points clear of the relegation places, but head coach Richie Williams isn’t feeling the nerves. Speaking to Cambridgeshire Live, he revealed his side can ‘push on and finish higher in the table’ as they look to book their place in National One for the fourth successive year. The Blood and Sand’s run-in looks tough on paper, with the likes of Old Elthamians and Rosslyn Park to come, but a victory over an inconsistent Rotherham side would certainly be a step in the right direction for the men from Volac Park.

Following a narrow loss to Sale FC to conclude February, Darlington Mowden Park reacted immediately in Round 24 as they held off a battling Esher outfit to return to winning ways last weekend. Since the turn of the year, DMP have picked up victories in five of their eight fixtures and their recent resurgence has given them a chance of finishing in the top four this term.

The North-East club are 15 points behind Blackheath so there is still work to be done, but a triumph from their longest away trip of the season would only enhance their hopes. DMP will travel 378 miles to face Plymouth Albion this weekend and while there is a huge geographical distance between the two clubs, in terms of rugby, not much has separated them this season. As things stand, Albion are only five points behind DMP and Kieran Hallett’s side will be after a response after losing to league leaders Old Elthamians last time out. Plymouth have won their last five home games so they will be keen to add to that their record in Round 25.

An unbeaten home run of four games came to an end for Sale FC in Round 24 as they lost to Blackheath at the CorpAcq Stadium. Jonathan Keep’s side were impressive in Manchester last weekend, but two red cards for Sale proved costly and now they will want to bounce back when they travel to Loughborough Students on Saturday.

Sale are currently eight points clear of the relegation places and they can extend that gap against bottom of the table Loughborough. The Students’ survival bid suffered a major setback last week as they lost to rivals Birmingham Moseley and the Midlands club are now 10 points adrift of safety. With four of their final six games coming against teams currently in the top half, Loughborough may feel like this home clash with Sale could be an opportunity to reignite their challenge to stay in this division.

Bishop’s Stortford produced a solid display to return to winning ways at the first time of asking in Round 24. Andy Long’s men brushed aside Cambridge to secure their sixth victory from their last seven matches and after languishing in the relegation places at one stage, another campaign in National One is edging closer for the Hertfordshire club.

As things stand, they sit eight points above the relegation places but for Stortford’s next opponents Caldy, their position is a lot more precarious. The Wirral outfit are just three points clear of the drop zone so a positive outcome might be a necessity at Paton Field this weekend. They did produce an excellent fightback against Cinderford in Round 24, but now Caldy need to find themselves on the right side of the scoreline and a win on Saturday could arguably be their biggest result since gaining promotion into National One two years ago.