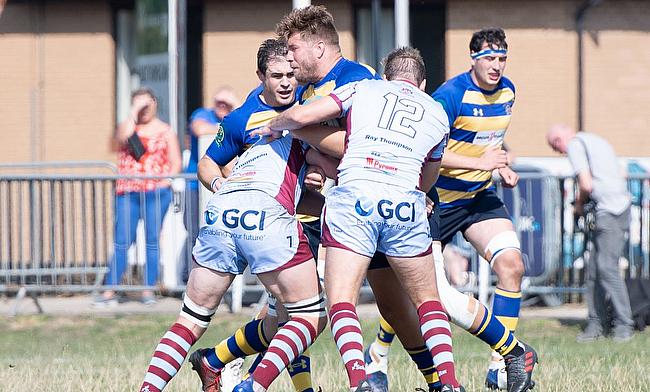 The lead in National One changed hands once again in Round Nine as the race for promotion provided another twist in this fascinating season.

Old Elthamians and Rotherham Titans are now level on points at the summit and have the same amount of wins, with OEs occupying top spot because they have drawn more games than the Titans.

Both sides secured victories on Saturday against Esher and Plymouth Albion, respectively, while Blackheath and Rosslyn Park also continued their good form with wins over Caldy and Loughborough Students.

Sixth placed Chinnor are just three points off the top after a late triumph against Darlington Mowden Park while Ampthill and District are also not far behind the frontrunners after a good win at Bishop’s Stortford.

Old Elthamians are back on top of National One thanks to a hard-fought win over Esher at College Meadow.

The hosts were good value for their 12-3 lead at the break with Dom Lespierre and Harry Ledger both crossing while Owen Waters landed a penalty for Esher.

OEs opened up a 16-point gap following Stefan North’s converted try, but on the hour mark, Esher hit back through Joe Beckett.

The visitors then increased the pressure on OEs, but the home side were able to hold firm and a Tom White penalty was enough to secure Old Elthamians their fourth successive home win of the season.

Harry Dunne scored two tries for the Yorkshire side, with Seb Nagle-Taylor and Henry Roberts also touching down. Alex Dolly kicked five points for the hosts which takes him over the 100-point mark for the season.

Herbie Stupple opened the scoring for Plymouth while Albion’s second try came after half-time, but this was another tough afternoon for Kieran Hallett’s side who also had Dan Mugford stretched off.

Blackheath’s fine form continued as they beat Caldy to seal their fourth win on the spin in National One.

Caldy, who had begun the afternoon at the summit of the division, hit back as Derek Salisbury dotted down, but ‘Club’ responded with a try of their own through Henry Staff.

However, the hosts were right on the coattails of Blackheath as they entered half-time as Luke Hibberd made sure the deficit was reduced to three points as he claimed Caldy’s second try.

After the restart, Caldy went ahead as Ted Stagg barged his way over, but despite being down to 14-men following Craig Dowsett’s yellow-card, Blackheath re-took the lead via Mark Cooke’s boot before Foster’s second try ultimately secured the win for James Shanahan’s side.

Rosslyn Park are just one point off the top of National One thanks to a tense victory over Loughborough Students.

Greg Lound converted Peter Weightman’s effort before a penalty try plus scores from Paul Doran-Jones and Jack Barnard made it 29-3 at half-time.

However, Loughborough sparked into life after the break as Victor Keunen and Thibaud Flament both crossed to cut Park’s advantage to 12 points.

Henry Spencer and Austin Beckett then exchanged tries before Greg Gillanders went over for the hosts which proved to be the decisive score.

The Students continued to battle and secured two bonus-points following a penalty try right at the death.

Chinnor snatched a late win at Darlington Mowden Park to end a run of three games without a victory.

Lock Jack Ramshaw grabbed a close-range try in the final play of the match to seal a welcome win for Matt Williams’ side at the Northern Echo Arena.

Chinnor fly-half Caolan Ryan kicked 13 points while Kieran Goss went over for the visitors’ only other score.

Ampthill and District produced a strong second half performance to see off Bishop’s Stortford at Silver Leys.

The A’s scored their first try as Spencer Sutherland galloped down the wing to touchdown, but the visitors were pegged back when George Cullen darted over.

Will Simmonds then pounced on a kick through to score Stortford’s second before half-time, but the hosts were unable to add to their tally after the restart as Ampthill clicked into gear.

Sam Baker, Euan McKirdy, Sutherland and Will Allman all crossed in the second 40 as Ampthill claimed back to back victories.

Two first half scores proved just enough for Cinderford in an attritional encounter against Cambridge at Dockham Road.

The hosts led 14-0 at the break thanks to a penalty try and Ben Chan’s converted effort before Lawrence Rayner’s penalty cut the lead to 11 points at the beginning of the second half.

Rayner landed two more penalties to set up a tense but scoreless finish as Cinderford held firm for their second home win on the bounce.

Birmingham Moseley ended a four-game losing streak as they moved to within two points off safety after this welcome victory over Sale FC at Billesley Common.

James Williams nudged over a penalty to give Moseley the lead, but Sam Griffiths scored to put Sale in front.

However, the superb Williams landed a second kick and dotted down himself to give Moseley a 14-5 advantage.

Sale were able to cut the gap to just two points before half-time as Andrew Hughes went over, but Williams kept Moseley in front with his second try of the afternoon,

The hosts continued to be on the front foot and Buster Lawrence’s try with 10 minutes to go ultimately sealed Moseley’s second win of the campaign.

Ryan Parkinson did add a late try for Sale, but it was merely a consolation as the Midlands club picked up a much-needed triumph.