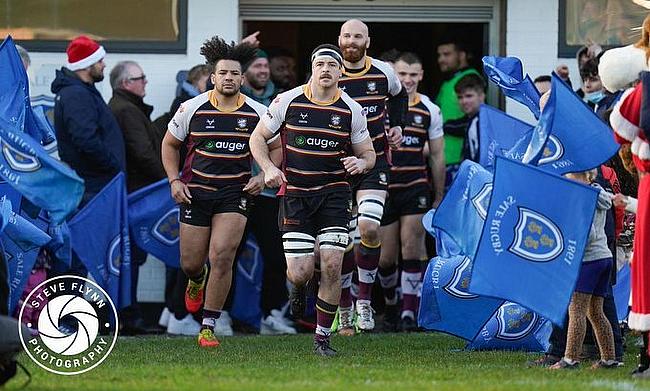 Before the beginning of the season, not many followers of the National Leagues would have predicated Caldy and Sale FC to be battling it out for a place in the Championship whilst Hull’s rise is one of the stories of the campaign in National Two North. Photo Credit: (Steve Flynn)

“If we’re being very honest, we’re now at a point where we are so close to the end that of course we are looking to win the league.”

Those were the words of Caldy’s Ben Jones in last Sunday’s edition of The Rugby Paper after the Wirral outfit took another huge step towards the Championship.

Title races are meant to test the mental strength of teams. This is the time in a season where pressure is at its highest, but Gareth Davies’ side are certainly not displaying any nerves on the field.

If anything, Caldy have grown stronger as this battle for promotion has wore on and their gritty victory over Rams RFC last weekend might have been the clearest indication of that.

After romping to the National Two North title in 2019/20 following 25 wins from their 25 matches, Caldy have embraced being back in the third tier and taken it to new heights. They have stitched together a run of 16 straight victories and are seven points clear heading into their final game of the season against Sale FC on Saturday afternoon.

Following their triumph over title rivals Rosslyn Park at the beginning of April, Davies played down talk of an unprecedented promotion to the Championship but he did reveal why Caldy find themselves top of the pile with the finish line now inches away.

"It is just another three games to go for us. I am not going to give you anymore!"

📺👉 Join us for the run-in on The National League Rugby Review Show: https://t.co/UnmXIYjmgO#Nat2n #Nat2s pic.twitter.com/m4QX9Pdgeg

“It is just about keeping the boys together,” Davies told The National League Rugby Review Show. “They are a great bunch. They get on with each other, they spend loads of time together away from the club and we have been together for a long time. They all know what everyone can do and they trust each other so that makes a big difference.”

From a playing perspective, the likes of Jones, Nick Royle and skipper JJ Dickinson probably epitomise this whilst Andrew Souter and Richard Vasey – both former players at Caldy – are now an integral part of Davies’ backroom staff.

But the men from the Wirral will know a second league title in as many seasons is not in the trophy cabinet just yet. They are 80 minutes away from creating history, but second-placed Sale FC arrive at Paton Field ready to spoil their party and also wrestle the destiny of the title out of Caldy’s seemingly watertight grip.

Jonathan Keep’s men might not have said it publicly, but they would have been waiting for their North West rivals to stumble because Sale have done everything possible to take this title battle to the wire. Eleven straight wins has kept the pressure on the league leaders but if they were to add to that record on Saturday, ‘The Dogs” would be in control.

Whilst this huge clash is Caldy’s last game of the term, Sale still have to face Chinnor at Heywood Road so whilst victory at Paton Field would change the shape of this promotion race, they would still have a job to complete on April 30th.

You can argue that Sale’s belief has been the main reason why they are still chasing down Caldy. Stunning comeback wins against Rosslyn Park, Rams and most recently Blackheath have kept this talented group in the hunt and they have been backed by a raucous home crowd on each occasion.

Keep told the club website before that aforementioned victory v Blackheath: “At this stage now, there is definitely a mentality of just move on to the next week.”

Since their last defeat against Cambridge at the start of the year,  Sale have taken 51 points from a possible 55. They have kept their promotion dreams in their own hands by keeping their standards high but if they are to take it to the final day, Keep’s charges will have to raise the bar one more time.

Away from this ‘title decider’ in National One, Leeds Tykes’s bid to stay in the league resumes on Friday night when they visit Darlington Mowden Park. Jon Callard’s men boosted their chances of survival with a 42-36 victory over Plymouth Albion last time out and it means the Yorkshire side head to the North East just three points from safety with two games in hand whilst DMP’s recent 50-14 setback against Cinderford leaves them eight points above the Tykes.

With Blackheath not in action this weekend, Leeds can move out of the drop zone whilst Plymouth will be focused on their own movements away from the trapdoor. Albion are six points clear of the bottom two and host Taunton Titans at Brickfields this weekend.

Hull on the brink

Hull is a city which is currently bubbling with sporting optimism. Following the arrival of new Turkish owner Acun Illicali, the football club  – Hull City – and its fanbase are beginning to look up the Championship ladder rather than over their shoulders whilst in rugby league, Hull KR have a shot at reaching a Wembley final in the Challenge Cup.

It is a city which oozes passion for rugby league in particular and this was highlighted by Good Friday’s derby day clash between KR and arch rivals Hull FC as a sell out crowd flocked to Craven Park.

Sometimes three is a crowd and whilst rugby league and football rule the roost in this part of Yorkshire, rugby union is on the verge of having its moment in the sun.

In the curtailed 2019/20 National Two North season, Hull RUFC finished eighth in the table but fast-forward 24 months and Gary Pearce’s side are one point away from achieving a remarkable promotion to National One.

Key to their consistency this term has been their determination to dig deep in big moments. Against title rivals Rotherham Titans, Sedgley Park and even Fylde, Hull have had to display bucketloads of character to maintain their stranglehold at the top of the division.

Yes, winning the league would be a fairytale story but assembling a brilliant squad of players, in itself, is a major achievement for Hull given the popularity of rugby league across the region.

Neighbours Hull Ionians have walked this walk in recent years – winning promotion in 2014/15 and again in 2018/19 – but for their inner city rivals, building a team each year continues to be a challenge.

But their hard work has been rewarded this season. Mike Adlard, Reece Dean and Keane Naylor have been a potent back three who have grabbed the headlines at all the right times whilst their firepower up front has set the platform for Hull to wreak havoc.

Eighteen straight victories has left them on the cusp of glory and perhaps clinching promotion will be made even sweeter this weekend if they are to get the job done against Hull Ionians at the Ferens Ground.

It is arguably the story of this National League season and Pearce’s boys are poised to finish off the final chapter in Round 29.

It would take something staggering for Hull not to be crowned champions this season, but Rotherham (2nd) and Sedgley Park (3rd) will keep fighting to the end. The Titans travel to Sheffield Tigers this weekend whilst Sedge visit Huddersfield as both clubs battle it out for the silver medal spot.

Fourth-placed Stoubridge host Luctonians in their penultimate fixture of the campaign whilst elsewhere, Fylde take on Chester, Tynedale entertain North East rivals Blaydon, Loughborough Students are up against Bournville and Wharfedale go to Harrogate.

Esher and Redruth could take it to final day

It is hardly a surprise that the National Two South title race is going to the wire again. Over the last few seasons, it has been extremely tight at the top at this stage of the campaign and an enthralling 2021/22 term isn’t any different. For so long, it has been a four-house race, but with a couple of games remaining, realistically, we are down to just two.

Mathematically, Clifton (3rd) – who face Dings Crusaders in a Bristol derby this weekend – can still win the league but it would take a remarkable collapse from league leaders Esher and chasers Redruth over the next eight days.

In terms of Esher, there was a concern back in February that their title aspirations were hanging by a thread. Losses to Hinckley and Henley Hawks left them seven points off the pace but Peter Winterbottom’s troops dusted themselves down and have put together eight straight victories to surge to the summit.

The biggest plus point in their recent purple patch has been the fact that The Eees have beaten Redruth, Clifton and fellow promotion challengers Worthing Raiders and it is against the latter where their next challenge arises.

The Raiders’ title hopes came to an end last week, but that won’t stop the Sussex club from giving it their all against the table-toppers especially after Esher’s last-gasp win at The Rugby Park last month.

If Esher were to overcome this hurdle on Saturday, a return to the third tier for the first time since 2018/19 could be sign, sealed and delivered but Redruth have all the tools to take this to the final day.

Director of Rugby Nigel Hambly said last week that there were still plenty more ‘twists and turns’ to come even at this late stage of the season and their length of the field score against Dings Crusaders in Round 28 was a prime example of that. Kyle Bradley rounded off a remarkable move to clinch a crucial maximum for the Reds and they head into Saturday’s meeting with Barnstaple still within touching distance of Esher after a sequence of six successive triumphs.

Redruth have been in the fourth tier for the last decade, but they are still very much in the race to end their 11-year wait for a return to National One.

Also across National Two South this weekend, Leicester Lions will want to continue their strong conclusion to the season by taking the trip to Hinckley and Henley Hawks host Barnes in an all London affair whilst Bury St Edmunds go to Old Albanian, Guernsey Raiders face Canterbury and Rochford Hundred make the three-mile trip to local rivals Westcliff.

For all the best and biggest moments from Round 29, subscribe to The National League Rugby Review Show…