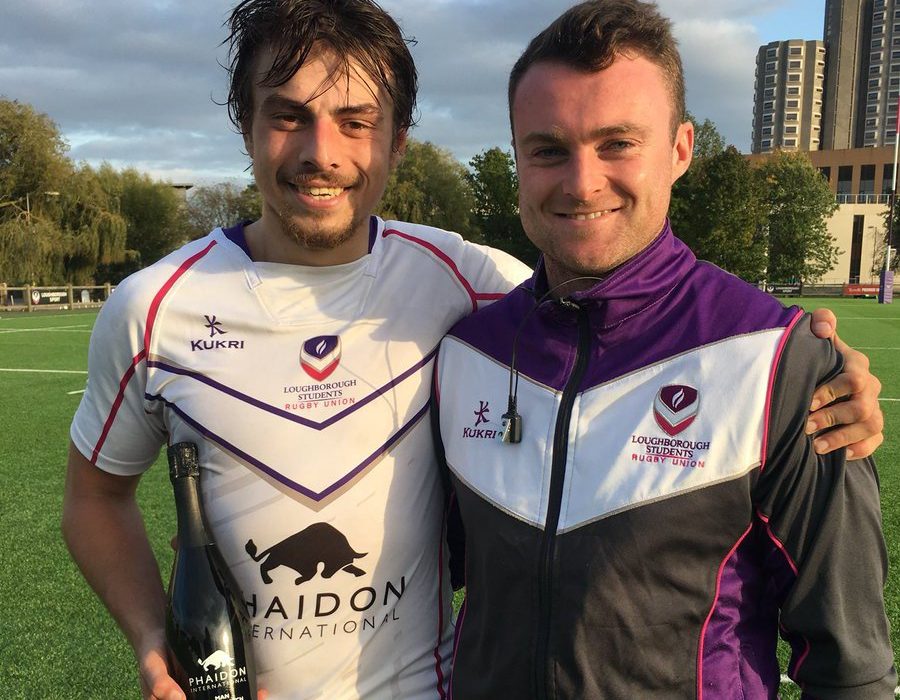 The versatile player has begun studying at Loughborough College and he is also involved with the National One and BUCS teams.

“New beginnings”, the 22 year-old Oskar Hirskyj-Douglas posted on his Instagram back in September, the month he ventured into university life and began a different sort of chapter in his impressive rugby career. The university and National League formats of the game are often viewed as a route for players to push on and showcase their abilities but Hirskyj-Douglas sees joining Loughborough College in a different light.

Last month, in front of spectators at the Rec and BUCS Super Rugby’s growing audience, Hirskyj-Douglas was in action for his new side as they aimed to clinch their second win of the campaign. Loughborough have been strong in recent years and against Bath, they showed their class as they dominated proceedings to come away from Somerset with an excellent victory.

With a clinical edge and stern defence, the Midlands side merited their triumph and headed back up the M5 in a buoyant mood. After establishing themselves as a National One side and tying that into their BUCS ambitions, Loughborough is an institution which continues to develop athletes, but also it is an appealing project to be a part of.

For the rightful praise which the university receives, however, Hirskyj-Douglas’ reasons for choosing Loughborough are not entirely focused on his future in rugby.  “I am massively enjoying my time here and playing for the university in BUCS Super Rugby,” he says. “But, I was attracted to Loughborough because my friends had been here and it seemed a great idea to study here.”

Despite the forward suggesting rugby was a not a major reason in why he moved to Epinal Way, it was always on the cards that Hirskyj-Douglas would feature for Loughborough in both National One and BUCS Super Rugby when he enrolled in a three-year Sports and Exercise Science degree.

His glowing rugby CV emphasises that point. From the cold mornings playing for Wilmslow Rugby Club to silverware at Twickenham and representing England on the world stage, Hirskyj-Douglas is probably one of the most experienced players in Loughborough’s set-up.

“My Dad took me down at U9 level to Wilmslow Wolves,” Hirskyj-Douglas tells me over the phone. “I worked under Rick Noden who helped me out a lot and really got me into rugby. I obviously then played at Wilmslow High School and most of my friends were there too.”

And it was his time at secondary school which was a springboard for Hirskyj-Douglas’ journey into rugby. In 2010, he stepped out at Twickenham and was part of the side that clinched the U15 Daily Mail Cup (now the NatWest Schools Cup) against Wellington College. A year later, he lined up for the U18s who faced Whiftgift in the semi-final. Hirskyj-Douglas was on the wrong end of a masterclass by a certain Elliot Daly on that occasion, but the bigger picture for the teenager was the fact he was playing in these types of games.

“I think playing for both age groups at Wilmslow was such a learning experience and a great step for me,” he adds. “We were successful because we had so many good players, but as a team, we all got on so well too. Playing at Twickenham was great and an experience I won’t forget, but it was about winning the match with the guys.”

Wilmslow’s impact in schools rugby was starting to turn heads as they continued to be one of the top public schools in the country. The likes of Tom Hudson and Sam James were part of the same side as Hirskyj-Douglas in 2011, and like his former teammates, he too has tasted playing in a Premiership environment.

While Hudson was catching the eye of Leicester Tigers and James earmarked by Sale Sharks, Hirskyj-Douglas was being watched by Wasps and his performances in the Daily Mail Cup gave him the opportunity to move to the Ricoh Arena at just 16 years-old.

“It was an opportunity that I wanted to take,” says Hirskyj-Douglas. “I knew it would be daunting leaving home, but I knew I had to grow up. I remember by first day at Wasps and I dislocated my finger. They just told me to take myself to the hospital. I knew I wouldn’t have anyone to take me there, but this was the learning curve I needed.”

Hirskyj-Douglas continued to develop at Wasps and he was part of Henley Hawks’ National Two South side which won the title in 2015, the same year he made his debut for his parent club.

However, from gaining promotion to National One and representing Wasps, he was released by the Midlands club two years ago.

He adds: “There were plenty of chances for us [younger players] to show what we could do. I fell short of what was expected at Wasps and you really need to show that commitment at a young age. I don’t think I was mature enough and maybe if I had gone to university first, then that might have helped.”

For any young player, being let go by a club is always tough but Hirskyi-Douglas remained positive. Already part of the England 7s academy, the call came from Simon Amor in March 2016 that he would be part of their World Series squad that travelled to Vancouver.

“My debut for Wasps wasn’t a game I remember well,” Hirskyj-Douglas says. “We were winning and I came off the bench with five minutes to go and we lost! England went much better. It was a special debut. I realised that all that effort and hard work I had put in was for moments like Vancouver and to score as well just added to it.

“To play with the guys I was involved with [such as Tom Mitchell and Dan Norton] was humbling. It was great just to be contributing to the team and you just got a sense that we were all working towards a common goal which was great to be a part of.”

But, for now, Hirskyj-Douglas’ ‘goal’ is to just focus on himself and university life. Studies and enjoying his rugby are top the agenda, but at just 22 years-old and with the talent and experience he possesses, there is bound to be another chapter written in Oskar Hirskyji-Douglas’ journey.