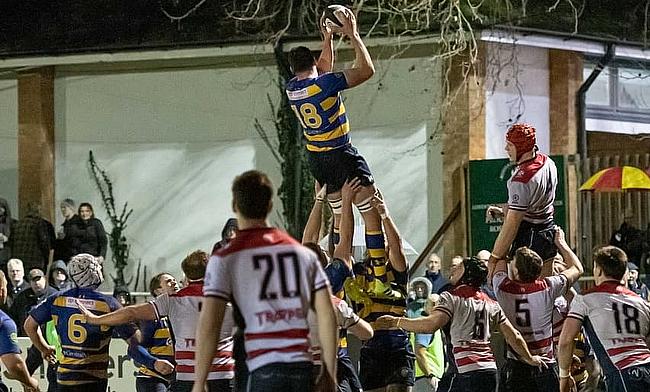 With it being the final round of fixtures before the festive break, we have decided to deliver a more condensed review from Round 16 in the National Leagues which included some monumental scorelines and results. (Photo Credit: Ian Carter)

Rosslyn Park will end 2019 on top of National One thanks to a 33-20 win over Old Elthamians. Tries from Hugo Ellis (2), Craig Holland, Dan Laventure and Joe Munro saw Kieran Power’s side secure maximum bonus-points and Park are now at the summit by virtue of ‘Games Drawn.’

Ollie Claxon and Hamish Barton (2) both dotted down in the second period for OE’s, but an excellent first-half performance was enough for Park to go top.

Tom Hodgson scored 16 points as Richmond entered the Christmas period level on points with National One leaders Rosslyn Park following a 21-5 away win over Chinnor. The fly-half put the visitors ahead with a penalty before Hodgson also converted his own try in a dominant first-half display.

Richmond’s Alex Bibic also crossed and their lead was extended to 21-0 when Hodgson landed another penalty for his side. Nick Selway did get Chinnor on the board with six minutes to go, but the damage had already been done.

Adam Aigbokhae, Nick Royle and JJ Dickinson all scored twice to help Caldy to a comfortable 53-12 win away at Chester. Callum Bennett was also on target for the Wirral outfit, who remain eight points clear at the top following their 15th successive win.

Second-placed Fylde bounced back from their defeat to Sheffield Tigers as they got the better of local rivals Preston Grasshoppers in Round 16. Warren Spragg’s side picked up a 28-3 win at Lightfoot Green thanks to tries from Ben Gregory, Tom Carleton (2) and Connor Wilkinson.

Sedgley Park were able to hold off a late fightback from Wharfedale to maintain their top two challenge as they came away from Yorkshire with a 39-36 win. Scrum-half Danny Openshaw grabbed a brace whilst Tom Coe, Leon Simpson, Steve Collins and Tom Ailes also crossed.

Dale are now five points clear of the drop zone following this defeat and they are level on points with Luctonians who recorded an excellent 14-10 victory away at Stourbridge. Rob Lewis and Callum Young scored either side of the break to clinch an impressive win for Ryan Watkins’ side.

Tonbridge Juddians’ Noah Ferdinand scored a hat-trick as the National Two South leaders hammered Sutton & Epsom 83-10. The winger’s trio was just one aspect of a blistering TJs display which also saw Toby May, Mark Davey and Duncan Tout claim two tries apiece whilst Rory McHugh, Charles Edwards, Hugo Watson and Will Robinson also got in on the act.

Peter Dankert’s side are still two points clear of Henley Hawks after the second-placed side beat Old Redcliffians 31-19 in the final round of games before the Christmas break. Samir Kharbouch, Reuben Norville (2), Jack Robinson and Alex Bradley all crossed and the Hawks are now also four points clear of Taunton Titans, who lost 26-20 to Redruth.

Matt Shepherd starred with the boot as he kicked 16 points whilst Richard Brown and Jack Hodge dotted down for the Reds, who have now won seven of their last eight matches.

Leicester Lions’ trip to Old Albanian and Esher against Barnes were both postponed due to waterlogged pitches.

A full list of results can be found on the ncarugby.com homepage.