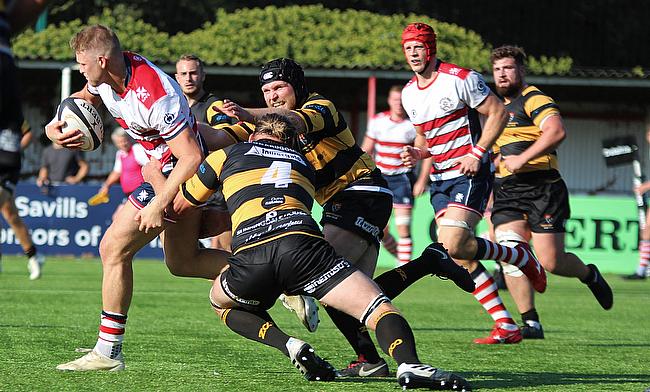 Rosslyn Park delivered another excellent performance to secure their third win of the season and move to the summit of National One. (Photo Credit: Phillipa Hilton)

Kieran Power’s side proved too strong for Canterbury at the Rock and sit on top of the division by virtue of points difference.

Cinderford have also won all three of their matches in this campaign, but for the second week running, Paul Morris’ side left it late to maintain their winning start as they beat Cambridge.

Elsewhere, Birmingham Moseley and Chinnor both bounced back from Round Two defeats whilst Plymouth Albion and Sale FC were able to secure their first victories of the season.

Rosslyn Park recorded their third successive victory of the season as they beat newly-promoted Canterbury to move to the summit of National One.

Kieran Power’s side scored seven tries against the City Men and they have begun this campaign in excellent fashion.

??? “We’ve got some big units that must be intimidating for the opposition.”

Park captain @hugo_ellis8 gives his thoughts on our win over @cantrugby

The visitors actually went in front at the Rock via Dan Smart, but the home side hit back with four tries before half-time through Dan Laventure, Hugo Ellis and a brace from Craig Holland.

Jamie Dever did grab a second score for Canterbury after the interval, but Andy Pratt’s side couldn’t find a clinical edge.

Instead, Park were rewarded for their defensive efforts as Ellis completed his hat-trick before Ben Howard wrapped up the victory.

Despite Harry Hone’s early red-card, Cinderford’s winning start in National One remains intact as they snatched a last-gasp victory against Cambridge.

Mike Mayhew’s try gave the hosts the lead but Hone responded for Cinderford before his dismissal for a dangerous tackle.

With the man advantage, Cambridge managed to edge back in front through Ned Brown but seven minutes after half-time, the away side levelled the scoreline thanks to a powerful effort from Nathan Taylor.

A superb penalty from Rhodri Adamson handed the Blood and Sand the lead once again, but the 14-men of Cinderford would silence Volac Park as George Porter barged over to clinch an unlikely win.

Richmond survived a spirited Blackheath fightback to beat their local rivals and secure their third consecutive victory of the season.

Hamish Graham claimed Richmond’s third try of the afternoon, however, Blackheath sensed a route back into this contest when Jake Parker was yellow-carded.

‘Club’ were awarded a penalty try and Leo Fielding’s late score meant Blackheath only had to convert to snatch the win, but the hosts failed to add the extras as Richmond held on.

Rams RFC continued their eye-catching start to life in National One as they beat Darlington Mowden Park at the Northern Echo Arena.

A Jamie Gutteridge try gave the visitors a 5-0 lead and an Alex Seers penalty added to their tally before the interval.

Euan McKirdy brought DMP to within a point of their visitors with a converted try, but Seers increased Rams’ margin from the tee.

These proved to be the final points in this encounter as the newly-promoted Rams secured yet another victory in the third tier.

Birmingham Moseley bounced back from their Round Two defeat by securing an excellent victory against Bishop’s Stortford in a thrilling content.

A late Ben Palmer penalty sealed the win for the Midlands club, who were beaten by Rams last weekend.

Moseley did hold a 21-10 advantage at the break thanks to tries from Morgan Dawes and Aquile Smith (2), but only after Stortford had taken an early 10-0 lead following scores from Chris Smith and James Apperley.

Palmer’s first penalty of the afternoon added to Moseley’s total, but yellow-cards to Peter Austin and Danny Wright allowed Stortford to cut the gap to six points thanks to Sam Winter’s try and three points from the boot of Tom Walker.

Aquile Smith’s hat-trick score kept the home side ahead, but this pulsating contest saw Stortford move in front after Baxter Wilson and Chris Smith dotted down to make it 32-31.

However, there was one final twist to come as Palmer’s late penalty clinched the win for Adam Balding’s side.

Chinnor claimed their second victory of the season as they beat Hull Ionians at Kingsey Road.

Chinnor went ahead thanks to Joe Dancer’s try and scores from Josh Hodson and Jake Ashby saw the hosts lead 19-0.

Ashby’s second score kept Chinnor in control, but Matt Williams’ side suffered a number of injuries in this contest and their reshuffled squad allowed the I’s to stay in touch.

Ben Whyte was able to touch down against a makeshift Chinnor with six minutes remaining, but despite their best efforts, the Yorkshire outfit couldn’t snatch a share of the spoils as Lawrence May sealed the victory with a penalty for the home side.

Plymouth Albion picked up their first win of the National One season against Rotherham Titans thanks to a late score from George Mills.

An entertaining first half saw Albion lead 19-7 at the break through Josh Skelcey (2) and Sam Daly, with Zak Poole responding for the away side.

The Titians came out after the interval and begun the second-half by cutting Plymouth’s lead to just two points thanks to a Connor Dever try and a penalty from Sam Hollingsworth.

Dan Mugford converted his own try to give the hosts some breathing space, but another three points from the boot of Hollingsworth kept Rotherham in touch.

The away side then thought they had snatched the victory when Anthony Maka’s try made it 27-26, but this pulsating contest concluded with a dramatic finish as Mills barged over the whitewash to seal Albion’s maiden victory of the campaign.

Sale FC secured their first victory of the National One season as they beat last year’s runners-up Old Elthamians at the CorpAcq Stadium.

Good to get the first win of the season especially against a top side like @ElthamiansRFC The @SaleFC boys showed some real commitment and guts especially on the back of two defeats. Contrasting feeling to last Saturday night!! #nat1 #onesalefc

Jonathan Keep’s side had suffered back to back defeats against Cinderford and Rotherham Titans, but tries from James Williams and Jarad Williams, plus 16 points from the boot of Chris Johnson sealed victory.

A superb defensive effort was also key for Sale as Bryan Hotston and Ollie Claxon were the only try-scorers for OEs on a frustrating afternoon for Gavin Lach’s side.