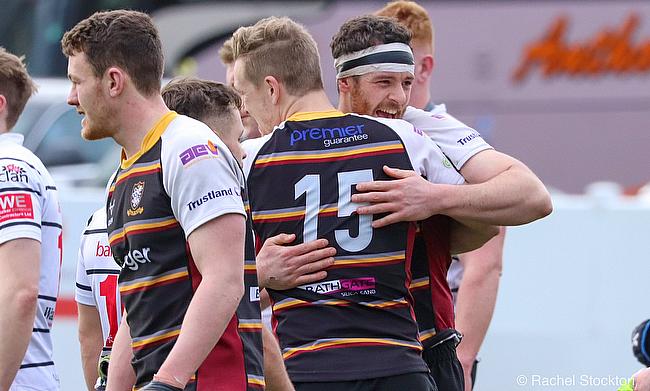 It has been a season which has constantly delivered and Round 25 was always going to follow suit. Photo Credit: (Rachel Stockton)

The first game of the weekend between National One title rivals Richmond and Rosslyn Park set the tone and whilst their clash at the Rock kicked things off on Friday night, their continuous battle for promotion may be the last thing which gets decided this term.

Park were victorious against their near neighbours and the gap at the summit of the third tier is now down to seven points. It seems like there will not be a procession to the Championship and quite frankly if there was, it would go against all the twists and turns we have witnessed in this enthralling campaign.

However, the word procession can be applied to National Two North. There never really was a traditional title race in this division because a polished and pristine Caldy have been relentless.

On Saturday, Gareth Davies and Matt Cairns’ side were able to clinch promotion to National One with five games to go after securing their 25th successive victory of the season.

The Wirral outfit have been unstoppable and whilst top spot is settled in their division, the fight for promotion from National Two South is far more open.

Tonbridge Juddians, Taunton Titans and Henley Hawks did not put a foot wrong in Round 25 so the race for a top two finish rumbles on whilst down at the bottom, Westcliff moved further away from danger.

Below is a more in-depth review of the weekend’s action:

Park opened the try scoring through Craig Holland and the hosts did lead 14-6 at the break as Paul Doran-Jones touched down on the stroke of half-time.

Two further penalties from the boot of Tom Hodgson pushed Richmond back into contention, but Hugo Ellis’ quick-thinking from the back of a rolling maul saw Laventure dart over with seven minutes remaining.

With five games to go, Richmond are now seven points clear at the top of National One so Park would require their near neighbours to slip up once again if they are to wrestle top spot away from their local rivals, but Kieran Power’s side are doing everything to ensure this title race goes down to the wire.

Chinnor failed to edge themselves further into the frame for top spot as they lost 22-19 at Sale FC. The Black and Whites had been on a run of six straight wins prior to their clash at Heywood Road, but despite leading 14-7 at half-time, tries from both Patrick Ah Van and Chris Johnson helped Sale over the line.

James Tyas and Nick Selway (2) went over for Chinnor, but the Oxfordshire side are now 12 points off the top.

At the wrong end of National One, Hull Ionians are hovering precariously above the trapdoor as a 24-15 loss to Canterbury means the Yorkshire club’s relegation is all but confirmed.

The I’s are 33 points from safety with seven matches in their season remaining, but if Birmingham Moseley pick up three points or more from their fixture with Sale FC this coming Thursday, the fate of Hull Ionians will be sealed before they play again.

Mike Umaga’s side did lead 15-7 at half-time in Kent following scores from Lewis Minikin and James Sanderson, but already relegated Canterbury roared back in the final 15 minutes to secure their second win of the campaign.

The battle for survival between Birmingham Moseley and Rotherham Titans continued on Saturday as the Yorkshire outfit secured two bonus-points in defeat against Bishop’s Stortford.

Tries from Anthony Maka (2), Kieran Frost and Harry Whitfield did put Rotherham 24-17 up in this contest but Stortford hit back to snatch the win at Clifton Lane, which leaves the Titans four points from safety.

As for Moseley, they had to settle for a losing bonus-point in a 13-12 loss to Cambridge, despite outscoring their hosts by two tries to one. Ben Palmer and Mason Tonks dotted down in each half, but a penalty from Ben Penfold proved to be the difference.

Moseley will be without Dan Wright for their game in hand against Sale FC on Thursday after he was shown a late red-card, but the Midlands club will be determined to clinch a positive result as they look to increase the gap between themselves and Rotherham.

Elsewhere, Rams RFC beat Old Elthamians 31-15 away from home, Cinderford secured a 21-16 win over Blackheath and Plymouth Albion moved above Darlington Mowden Park in the table thanks to a 34-27 victory at Brickfields.

Well, the inevitable finally happened. Throughout this season, Caldy have been simply irresistible and unstoppable in National Two North and on the weekend, Gareth Davies and Matt Cairns’ side were able to clinch the title following a 25th successive win of the campaign.

It now means Caldy will make an immediate return to National One, but who will finish as runners-up and in the play-off place, isn’t as crystal clear.

Fylde are currently in the driving seat to claim second spot in National Two North and on Saturday, Warren Spragg’s side were delighted to get their campaign back on track following a 48-10 win over Luctonians.

The Lancashire club had lost three of their last four matches prior to their clash with Lucs, but this was much more like it from Fylde as they ran in seven tries at Woodlands.

The Hornets have won 10 successive matches to propel themselves into the promotion race and after trailing 10-0 at Lockwood Park, tries from Joe Wilson, David Peck and Oli Povoas helped them to their latest victory.

In terms of Huddersfield, they are now only five points clear of the relegation zone after Otley secured two points in their 32-29 loss against Sheffield Tigers.

Tigers fly-half Mark Ireland starred as he kicked 22 points to guide Jamie Broadley’s side to a crucial win in their own survival bid whilst a penalty try, plus efforts from Max Johnson, Ben Magee and Paul Petchey, were enough to bring Otley closer to the rivals above them.

Also in National Two North, Sedgley Park beat Hull 13-10 to return to winning ways and Loughborough Students defeated Scunthorpe 54-7 whilst Stourbridge edged past Tynedale 29-27 and Chester maintained their good form with a 19-14 victory over Wharfedale.

The title contenders in National Two South did not flinch in Round 25 as the leading trio all secured maximum points, with table toppers Tonbridge Juddians surviving a late Clifton revival to clinch a 36-32 win at the Slade.

Tries from Duncan Tout (2) Tom White, Will Colderick, Mike O’Sullivan, Hugo Watson did put the hosts 36-10 up, but Clifton roared back in the final 30 minutes.

A hat-trick from winger Finlay Sharp, alongside Alex Lambert’s score, set-up a grandstand finish but Clifton couldn’t complete a remarkable recovery as TJs saw out a potentially pivotal win.

Things were also not a walk in the park for Taunton Titans as Sam Prior’s try and five points from the boot of Gary Kingdom in the final 15 minutes helped the second-placed side get past Dings Crusaders.

The Bristol club had led 12-7 at the break, but they found themselves seven points down shortly after half-time as Alex Spurdle and Nick Mason both scored for the home side.

However, the Crusaders kept battling and produced an excellent response as George Kloska and Tom Hargan crossed the whitewash to hand Dings the lead once again.

But, Taunton kept the scoreboard ticking over in the final quarter to seal the win and they remain two points behind Tonbridge Juddians with a game in hand.

The Titans will go top if they can beat Esher on March 14th and the Surrey outfit will head to Taunton on the back of a 46-20 loss to third-placed Henley Hawks.

Winger Reuben Norville scored on two occasions for the Hawks whilst Tom Emery, Will Janes, Scott White, Sam Lunnon and David Hyde also crossed. Henley are still only three points off the top so they will hope Esher can do them a favour this coming Saturday.

At the wrong end of the table, Westcliff have taken a huge step towards securing their place in National Two South for another season following an excellent 16-10 win over Old Albanian.

Greg Bannister and Chris Bolton scored the vital tries for Westcliff and now they are 13 points clear of the drop. All three of the sides below Westcliff – Sutton & Epsom (14th), Old Redcliffians (15th) and Bournemouth (16th) – lost on Saturday, with Old Reds the only team to secure a bonus-point from their 13-10 loss against Leicester Lions.