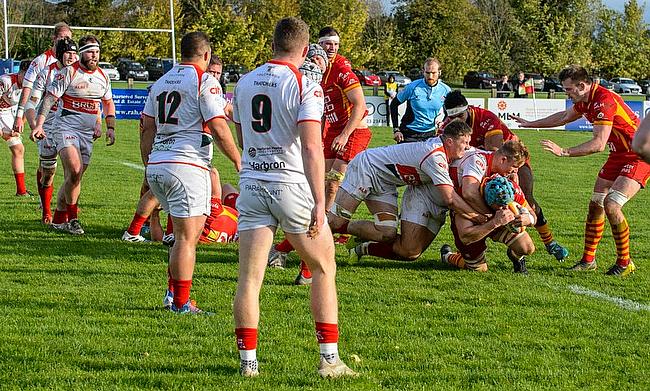 Rosslyn Park’s National One promotion hopes were dented in Round 20 after they lost to Plymouth Albion. (Photo Credit: Chris Fell)

Kieran Power’s side fell to their second away defeat in a row and it leaves Park seven points behind leaders Richmond, who eventually surged to victory against Bishop’s Stortford.

Rams RFC are still in the thick of things after beating Hull Ionians whilst down at the bottom both Birmingham Moseley and Rotherham Titans secured bonus-points in defeats against Old Elthamians and Darlington Mowden Park, respectively.

Richmond secured an excellent bonus-point victory over Bishop’s Stortford to remain on top of National One.

Steve Hill’s men began the day in pole position and they will now head into the final 10 matches of the season at the summit.

Check out the full match report from yesterday’s outstanding 51-10 victory over @BSRUGBY. 💛❤️🖤

With a quarter of the game to go, Richmond led 20-10, but the hosts ran in 31 unanswered points in a blistering conclusion at the Athletic Ground.

Jesse Liston, Louis Lynagh, Callum Torpey, Ronnie McLean and Cam Mitchell all went over in the final 20 minutes for Richmond.

Lynagh and Mitchell also crossed in the first-half, but at this point, Stortford were only trailing by seven points following a converted try and penalty from George Cullen.

Rossiter’s early effort got the ball rolling for Rams and a penalty try, plus Ollie Taylor’s score, gave the visitors a 19-5 lead at the break, with Jack Colbourne squeezing over for Hull Ionians.

At the beginning of the second-half, Lewis Minikin reduced the arrears from the tee but Rossiter’s second extended Rams’ lead.

Moses Liwaliwa grabbed another score for the I’s, but tries from Tom Vooght and Kieran Leicester sealed the victory for the away side.

Promotion challengers Rosslyn Park suffered a setback in Round 20 as they fell to a defeat against an in-form Plymouth Albion.

Kieran Power’s men began the day just three points behind Richmond but they are now seven points off the top following successive away losses.

Craig Holland, Harry Leonard and Benji Marfo all went over for Park, but they were unable to claim any points from their trip to Devon.

Laurence May kicked a late conversion as Chinnor beat Cinderford in a dramatic contest at Kingsey Road.

The hosts trailed with 10 minutes to go, but capitalised on Cinderford’s ill discipline in the closing stages.

George Evans, who had crossed to make it 27-21 for Cinderford, was sin-binned shortly after and the home side took full advantage.

Will Harries dived over in the corner to cut the deficit to just one point and May then held his nerve to claim the victory.

Nick Selway (2) and Josh Pieterse also went over for Chinnor in an entertaining encounter in Oxfordshire, whilst Harry Hone and Jack Hayes (2) dotted down for the away side, who had led 19-14 at half-time.

Blackheath scored four tries in the final 20 minutes to secure a battling bonus-point win over Sale FC at Well Hall.

Jarard Williams added a further try for Sale after the break and another penalty from Johnson made it 29-19 to the away side.

However, Blackheath launched a comeback which began with a Mark Cooke penalty before Freddie Owen, Henry Staff and Tom Burns all crossed to clinch the win for the hosts.

Rotherham Titans were unable to build on their recent victory against Birmingham Moseley as the Yorkshire side lost to Darlington Mowden Park in Round 20.

It had been a closely fought contest in the North-East, but DMP were able to pull away from their visitors in the final 20 minutes to secure the win.

The hosts had opened up a 24-10 lead at half-time with Ollie Hodgson (2) and Callum Mackenzie going over, whilst Zak Poole grabbed a brace for the Titans.

The impressive Warren Seals landed his second penalty of the afternoon to add to DMP’s lead, but Ben Robbins’ effort brought Rotherham right back into this encounter.

However, quick-fire scores from Tom Marshall and Connor Cade were enough to take the game away from Rotherham, but the hosts did fightback to earn a potentially crucial try bonus-point as both Kieran Frost and Robbins dotted down in the final four minutes.

Matt Hema scored a dramatic late try as Cambridge denied Canterbury only their second victory of the campaign.

Andy Henderson opened the scoring for the Blood and Sand before Hema crossed the whitewash to give the home side the perfect start at Volac Park.

With 2/3 of the season now complete here's a recap on our progress so far pic.twitter.com/gmNYxglkTG

Alex Meads responded for the visitors to make it 14-7 at the break, before both sides exchanged scores shortly after half-time with Henderson and Canterbury’s Ricky Mackintosh going over.

However, the game really sparked into life when Cambridge’s Joe Tarrant was sin-binned and the City Men took full advantage of his absence as Sean Stapleton and Tristan King both scored.

Canterbury’s only victory this term came against Rotherham Titans just before Christmas and it looked as though they were about to double their tally, but Hema’s late try snatched a sixth win in a row for Cambridge.

Birmingham Moseley missed two late penalties as they fell to a narrow defeat against Old Elthamians at Billesley Common.

Tries by Ollie Claxon (2) and Louis Brown, plus eight points from the boots of Hilton Gibbons and Brown, saw OEs battle into a 23-22 lead.

Zac Xiorroupoa (2) and Matt Dight had gone over for Moseley, who were impressive, but in the end, they had to settle for a losing bonus-point as two penalties in the final 10 minutes failed to hit the target.