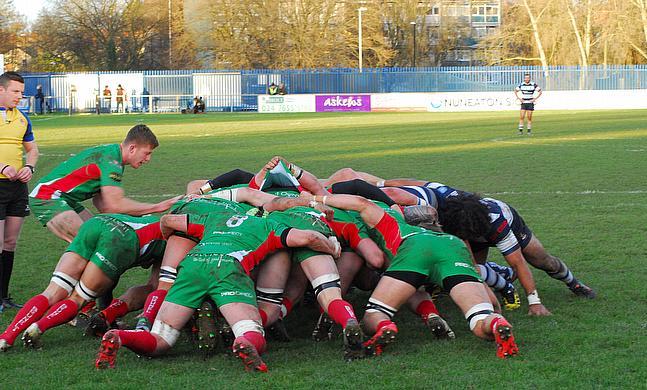 Followers of National One may not have predicated Caldy would be sitting at the top of the table after five rounds of action and the Wirral outfit will be aiming to stay there when they visit Plymouth Albion this weekend.

Albion were tipped to challenge for promotion at the beginning of the season, but they have had a mixed start to the campaign so will they be able to get October off to a winning start against the league leaders?

Second placed Chinnor are level on points with Caldy and they host Bishop’s Stortford this Saturday while fellow front runners Old Elthamians go to Sale FC and Cinderford travel to Esher.

It was a super September for Caldy. Four wins from their opening five games leaves Simon Verbickas’ side top of National One heading into the second month of the season and after comfortably avoiding relegation last term, the Wirral side are certainly making headway in this campaign. Caldy finished 11th in 2017/18 and that is the position which their hosts, Plymouth Albion, currently hold in the league standings.

How it stands after Round 5??
Next up we face top of the table @CaldyRUFC at Brickfields. #AlbionAsOne pic.twitter.com/cJfWuGMt9L

Albion were tipped to really challenge for promotion this season after consecutive third placed finishes, but it has been a spluttering start for Kieran Hallett’s side. Albion have won just twice so far and even more surprisingly, they have been beaten on two occasions at Brickfields, which over the last couple of years, has been a fortress. Plymouth will be keen to ignite their season in the first weekend of October and a home win against the current league leaders would be ideal.

Two year’s ago, Chinnor and Bishop’s Stortford were battling side by side for promotion from National Two South and now the clubs come together in the third tier this weekend. Chinnor have made a fine start to life in their debut season in National One as four wins from their first five fixtures leaves them level on points with table toppers Caldy. Matt Williams’ side have blown the ‘newly-promoted’ tag out of the water and they will be hoping that continues at Kingsey Road this Saturday.

Stortford entered National One a year before Chinnor and in their maiden season, they impressed. Andy Long’s side finished mid-table after a very satisfying campaign, but 2018 has not been perfect for the Hertfordshire club. In total, Stortford have won five out of 19 matches since the beginning of January, two of which have occurred this term. However, they do travel to Oxfordshire on the back of an impressive win over Loughborough Students in Round Five and now the task for Stortford is to claim successive victories for the first time in 11 months.

Sale FC against Old Elthamians is a fixture we have seen recently. The two sides met in the National Two play-off in May 2017 and it was OEs who triumphed that day to earn promotion into National One. Since then, Gavin Lach’s side have continued on an upward trajectory. After finishing sixth in their first ever season at this level last year, the men from College Meadow head into Round Six of this term sitting in third place after four wins from five matches.

They travel back to north-west this weekend and in fact, OEs are the last side to beat Sale FC on their own turf. That means Sale come into this clash having won their last 17 fixtures in front of their own supporters. Jonathan Keep’s men have been excellent at Heywood Road over the last year and the newly-promoted side have continued that record in National One having won both of their home fixtures so far. Sale may well be out for revenge this Saturday after their play-off defeat in 2017 and another triumph on their own patch could catapult them into the top half.

If you would have offered three victories in the first month of the new season to Cinderford before the campaign got underway, I think the newly promoted outfit would have taken it. Paul Morris’ side have made a solid return to National One and before last weekend, they found themselves sitting at the summit of the division.

A defeat to old foes Chinnor in Round Five saw the Foresters slip to fourth place, but they can bounce back this weekend when they go to Esher. The hosts on Saturday will also be looking to respond. Rickey Nebbett’s side were moments away from their second win of the campaign, but the boot of Caldy’s Ben Jones saw them fall to a fourth defeat. The Surrey-based side are currently in the bottom three, but after beating Cambridge in their last home fixture, another win at Molesey Road would be the ideal way to kick-off October.

A solid performance from their forwards helped Ampthill and District return to winning ways in Round Five. The Bedfordshire side had fallen to an away defeat at Plymouth Albion, but the A’s were excellent at Dillingham Park once again as they beat Blackheath to make it three straight wins on their own turf. Despite losing twice already this season, Ampthill might be content with the way they have begun the campaign as they currently sit just three points off the top spot.

Another home triumph would keep them firmly in touch with the early front runners, but Cambridge will have other ideas. Richie Williams’ side reacted to a defeat at Esher in Round Four with an excellent victory over Plymouth Albion last time out and now they will be looking to back that win up this weekend. The Blood and Sand were one of just two sides to beat Ampthill in their own back yard last term so can they be the first team to come away from Dillingham Park with the spoils this weekend?

Last Saturday, Rosslyn Park would have been bitterly disappointed. Park were beaten 34-33 by Darlington Mowden Park away from home, but Kieran Power’s side did more than enough to clinch victory at the Northern Echo Arena. Instead, they headed back down south with a couple of bonus-points, but they will be keen to harness the major positives from that performance and carry them into this clash against local rivals Blackheath.

So close but so far!

The hosts come into this fixture off the back of a loss to Ampthill and like Rosslyn Park, they would have been frustrated not to get a result at Dillingham Park in Round Five. However, ‘Club’ did win their last home fixture against Darlington Mowden Park and they secured three victories in the opening month of the season so another triumph at Well Hall this Saturday could see them leapfrog their London compatriots in the table.

Darlington Mowden Park began the National One season with back to back victories and they will be hoping to kick-off October in the same fashion when they head to Birmingham Moseley in Round Six. Last year’s National One runners-up have had a mixed start to this term and managed three wins in September which leaves them five points off the early league leaders Caldy.

DMP will be aiming to stay in touch with the pace setters while Birmingham Moseley are looking to respond after a defeat to Old Elthamians last weekend. Director of Rugby Richard Protherough wants his side to cut out easy mistakes and it seems like those errors have cost the Midlands club so far this term as they currently sit in the bottom three. Moseley have picked up just one victory, but that did come in their last home fixture against Rotherham Titans so a repeat of that success this weekend would be a very good way to begin October.

Rotherham Titans may have made heavy weather of it, but they managed to get over the line against Sale FC in Round Five to secure their second victory in National One. Joe Barker’s side had looked comfortable at one stage in the contest, but the Yorkshire outfit had to battle back to end September with a win.

It has not been straightforward for the Titans since relegation from the Championship, but they have the chance to secure back to back victories for the first time in 25 months when they travel to bottom of the table Loughborough Students this weekend. The host have lost all five of their games so far this term and Alan Buzza’s side are already nine points from the safety positions at this early stage of the season. The Students have shipped 139 points in their last three matches so they will be eager to put a difficult September behind them and spark their campaign into life as quickly as possible.