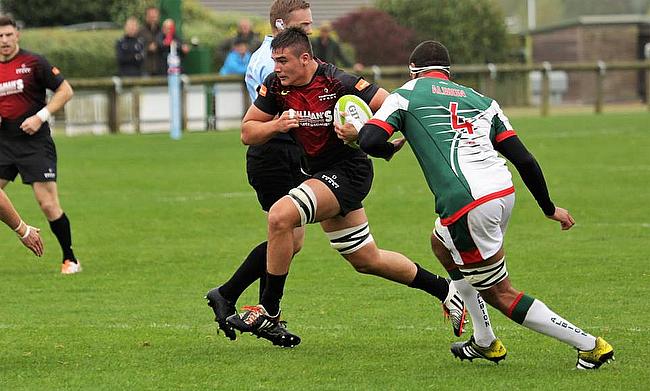 This really could be the season to be jolly for Hartpury College who will begin the New Year 22 points clear at the top of National One following their 16thstraight win.

Their latest triumph came away to Plymouth Albion, but the hosts certainly made the league leaders work for their victory.

Albion were able to end Hartpury’s perfect record of bonus point wins and they are also up to second in the table despite suffering their first home defeat of the season.

The reason for this is because Birmingham Moseley slipped to a late defeat away at Coventry while Ampthill and District also capitalised on Moseley’s misfortune to sneak into the top three.

There will be less Christmas cheer for Macclesfield who will resume their season in January 14 points adrift of safety after they were beaten by Fylde while spirits will be a high amongst the Darlington Mowden Park ranks as they secured a vital win over Blaydon.

Hartpury College won a pulsating National One clash against Plymouth Albion to clinch their sixteenth successive win of the season.

Tries from Steve Leonard, Mat Gilbert and Harry Randall helped the hosts to a 27-12 lead but Albion fought back with two touchdowns in the second period.

Dan Williams had crossed for Plymouth just before half-time (following on from Seta Raumakita’s early score) and the fly-half completed his hat-trick after the interval to set-up a nail-biting finish.

However, Hartpury were able to hold firm in defence and see out yet another victory which leaves them 22 points clear at the summit heading into 2017.

Ampthill and District are up to third in the National One standings as they secured their sixth consecutive victory with a win at Dillingham Park against the Old Albanian.

Will Goodge’s early try was added to by Loti Molitika and Matt Collins only after Nicholas Stevens had gone over for the visitors.

The second period began with the OAs being awarded a Penalty Try which also saw a yellow-card shown to Ampthill’s Sam Baker. However, the hosts prevented any score during his absence and instead gained a Penalty Try of their own on the hour to restore their 17 point lead.

The Old Albanian came back again and scored a converted try through Morgan Thompson, but yet another Penalty Try and a score from Ben Wilkinson made sure of a home victory.

For the second home game in a row, a late Will Maisey penalty saw Coventry clinch victory but this time it was against local rivals Birmingham Moseley.

Coventry winger Tom Howe ran in the opening try before Tony Fenner kicked eight points to give the hosts a 13-10 half-time lead, while Aaron Crofts’ score as well as a penalty and conversion from James Williams made up Moseley’s points.

Fenner landed his third penalty of the afternoon to begin the second-half, but Moseley took the lead for the first time in the contest as Jake Farnworth crossed before Williams nudged over two more penalties.

The home side were now trailing 23-16 and they needed to dig deep once again in front of their own supporters.

And they did just that shortly after the hour as Matt Price dotted down to round-off an excellent collective forwards try and set-up a tense last 15 minutes.

Coventry continued to push and were awarded a penalty two minutes from the end. Maisey had slotted over a kick to seal the win two weeks ago against the Old Albanian and once again, he kept his cool to snatch the victory for Rowland Winter’s side.

Blackheath picked up their first away win in over a month as they beat Esher at Moseley Road.

Club never looked like relinquishing their lead after a first-half brace from Mike Perks while fly-half Leo Fielding kicked two conversions and two penalties for a 10-point haul.

Markus Burcham and Jake Lloyd crossed in the second period for Blackheath to secure the victory which keeps them fifth in the table.

Esher’s points came from two Stephen Boatman penalties and a late try from Hugo Seccombe, but it is now just one win in five for the Surrey-based side.

Rosslyn Park moved to within a point of the top six in National One thanks to a bonus-point win over Cambridge at Volac Park.

Mark Lilley and Andy Reay tries saw Park lead 15-14 at half-time, but only after they had fallen behind thanks to scores from Jake McCloud and Matt Hema.

The visitors then had some breathing space in this contest as Andrew Henderson and Mark Kohler added touchdowns after the break, before Ed Milne completed a dominant second-half display by Rosslyn Park by scoring their fifth and last try of the day.

The score was 13-12 to Loughborough at half-time, courtesy of a try from Gair Currie and two penalties from Owen Waters while Sam Wilson and Darren Oliver crossed for the I’s.

Millar slotted over a drop-goal to get the ball rolling for the second-period, but it was matched by Waters who landed a third penalty 12 minutes into the second-half.

Laurence Cowen was then sent to the sin-bin on the hour for the hosts, but the Students could not take advantage of the extra man and it would prove costly as Millar held his nerve to slot over a superb penalty secure a vital win for Hull Ionians which leaves them four points from safety.

Fylde continued their impressive home record as they earned their sixth victory of the season at Woodlands as they crucially beat Macclesfield.

Matt Rogerson’s try on debut for Fylde got them off to a flying start before touchdowns from Warren Spragg and Tom Burtonwood helped the hosts open up a 21-0 lead heading into the second-half.

Macclesfield enjoyed long periods of pressure in the third quarter of this match and were rewarded for their endeavour when Josh Redfern scored in the left corner.

Redfern was at it again just after the hour as he grabbed his second try to put Macclesfield right back into this game, but the final 20 minutes of this contest were controlled well by Fylde who held out for an important victory.

Darlington Mowden Park are now four points clear of the bottom three as they secured a vital win over relegation rivals Blaydon in this all north-east affair.

DMP led 8-7 at the break thanks to an inspired first-half performance by Josh Bragman who set-up Maia Gibbs’ try as well as slotting over a penalty.

Mat Thompson scored the only try of the first period for Blaydon, but the hosts presented DMP with an early Christmas gift in the second-half as they pounced on a mistake to race clear with Jamie Barnard touching down to extend Darlington’s lead.

The home side hit back through Andrew Archibald before Bragman showed his qualities once again as he landed three successive penalties to put DMP 24-12 ahead.

Thompson scored his second of the afternoon to secure a losing bonus-point for Blaydon, but they are now 12 points from safety heading into the New Year.