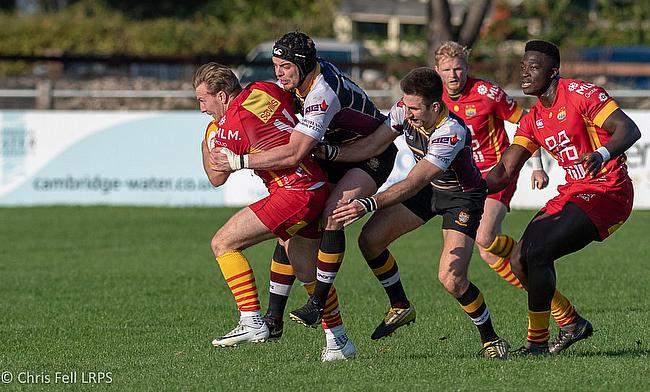 There will be no shortage of drama on the final day of the National One season as both the race for the title and the fight for survival takes centre stage on Saturday afternoon.(Photo Credit: Chris Fell)

At the top, the champagne is on ice for Ampthill and District as they require just a single point against Loughborough Students to be crowned champions.

Waiting in the wings will be Old Elthamians and if they were to defy the odds and snatch the league title away from Ampthill, they must pick up a bonus-point victory over Rotherham Titans if the A’s do slip-up.

In truth, the spotlight will be on the battle to avoid relegation as Birmingham Moseley, Caldy, Cambridge and Esher all aim for safety.

As things stand, Moseley and Caldy sit outside the bottom three and the two sides clash at Billesley Common on Saturday.

In terms of Cambridge, they are two points shy of safety heading into their match with Sale FC so Richie Williams’ side must get a positive result in the North-West and hope other results go their way if they stand any chance of beating the drop.

Like Cambridge, Esher’s fate is out of their hands but Tom Williams’ men are not mathematically down just yet. They would need to pick up a bonus-point win away at Blackheath and hope favours are done elsewhere if they are to pull off a remarkable escape from the relegation zone.

Ampthill and District sit on the edge of glory. The A’s are just one game away from securing a place in the Championship and the National One title will almost certainly be heading to Bedfordshire this weekend. Mark Lavery and Paul Turner’s side have won 12 on the bounce and their victory at the start of March over nearest rivals Old Elthamians as kept them on course for the second tier of English rugby.

Many may see it as a foregone conclusion, but the title race in #Nat1 has gone to the wire and ahead of this weekend, we spoke to both Ampthill & District and Old Elthamians about their excellent campaigns…https://t.co/bCD5bS8ItZ

Now, they head to the Midlands requiring just one point against bottom of the table Loughborough Students. Alan Buzza’s men had their relegation confirmed in Round 29 after losing away at Plymouth Albion and despite a resurgence from the Students as well as racking up the second highest number of try-scoring bonus points in the league, their eight-year spell at this level has come to an end. Loughborough will now be keen to end the season on a high in front of their own supporters, but it does seem unlikely that they will be able to spoil Ampthill’s promotion party.

One thing you can’t say about Old Elthamians is they lack fight and determination. Gavin Lach’s side had their promotion hopes dashed by Ampthill last month, but OEs have taken the title race down to the final day as they prepare to host Rotherham Titans. The men from College Meadow know they need to secure a bonus-point victory and hope Loughborough Students do them an almighty favour if they are to claim the National One crown.

Regardless of the outcome, OEs will be delighted with this campaign which begun with a 34-33 away victory over the Titans back in September so Rotherham will arrive in Mottingham aiming for revenge. Since the opening day, Joe Barker’s side have certainly experienced their fair share of ups and downs following their relegation from the Championship and their inconsistency can be summed up in their last two games. The Yorkshire outfit impressed against Bishop’s Stortford in Round 28 before being outplayed by Blackheath so Rotherham will be keen to end this term with a positive result as this young side look to build ahead of next season.

With all of the attention being on Ampthill & District and Old Elthamians over the last month, Blackheath have managed to manoeuvre themselves into third place and surpass the 100-point mark for the season. James Shanahan’s side have spent the majority of the campaign towards the summit and seven wins from their last eight games has put them in a strong position to finish in the top three.

‘Club’ haven’t lost at home since Cambridge came to town in February so the task facing an Esher side battling for survival seems a tough one. Tom Williams’ men still, mathematically, have a chance of avoiding relegation this season but they must pick up a bonus-point win at Well Hall and hope other results go in their favour. Speaking to us this week, the Esher head coach is realistic and knows it is likely his side will drop into National Two for the first time in seven seasons, but stranger things have happened…

Rosslyn Park will be eager to end a very strong season on a high in Round 30 when they host Cinderford. The fourth-placed side were in the promotion picture heading into the final weekend of March, but a gut-wrenching defeat to rivals Ampthill ended their hopes of finishing in top spot. Kieran Powers’s side bounced back with a win over Cambridge, but Round 29’s defeat to Caldy would’ve hurt.

The Wirral outfit produced a performance of grit and determination as they continue to battle for survival so Park will want to respond at the Rock on Saturday. Cinderford travel to the capital after a very satisfying season. Following promotion from National Two South, the Foresters have stayed well away from relegation battles and are now on course for a top eight finish, which would be a very good achievement for Paul Morris’ side. The Gloucestershire outfit haven’t won away from home since January so can they conclude their term with a triumph on the road?

After a slow start to the season, Plymouth Albion have had a pleasing second half of the campaign and it has enabled Kieran Hallett’s side to secure a top six finish this term. That may have seemed a long shot when Plymouth were languishing towards the drop zone, but eight wins from their last 13 matches has given them a platform to work off next year.

Albion have also re-signed and signed a number of players over the last couple of weeks including Connor Eastgate and Ashlee Crouch and their opponents this weekend, Chinnor, are also building towards the 2019/20 campaign. Matt Williams’ side will be plying their trade in National One for another season mainly thanks to a superb first half of the year. The Black and Whites were in the promotion mix, but since Christmas, they have just tailed off. They head into their final clash of the term having lost their last six games so a victory at Kingsey Road would certainly be a pleasing way to round off their maiden National One season.

Darlington Mowden Park have been busy this week. Both Shaun McCartney and Callum MacKenzie have re-signed for next term as Danny Brown’s side look to lay the foundations for a strong season in National One. In truth, DMP have done well to recover after a disappointing first half of the campaign but five defeats on the spin is something they will be keen to put right this weekend as they aim for a top eight finish.

For their final game of the season, they host Bishop’s Stortford who sit in ninth spot, one place behind DMP. Like the home side, Stortford really found some form after Christmas which saw Andy Long’s men completely turn their season around. Nine wins from their last 12 games has taken Stortford from relegation candidates to the cusp of the top eight and victory in the North-East on Saturday would guarantee the club a top half finish for the second successive year.

It has been a successful couple of weeks for Sale FC. Firstly, Jonathan Keep’s side, who made their debut at this level this season, secured their safety in National One for another year and they also recently clinched the Cheshire Cup with a win over Chester. With this mind, you wouldn’t blame Sale for enjoying themselves on the final day of the season as they look to end the term with a flourish, but their opponents face a completely different scenario on Saturday.

Cambridge arrive at the CorpAcq Stadium in the bottom three and their destiny is also out of their hands. As things stand, Richie Williams’ side are two points adrift of safety so they must get the job done against Sale and hope other results go in their favour if they are to survive the drop. The Blood and Sand missed a golden chance to ease their relegation fears in Round 29 as they lost to rivals Birmingham Moseley, but they have one final opportunity to save themselves this weekend.

Cambridge’s fate could well be decided by the outcome at Billesley Common this weekend when Birmingham Moseley take on Caldy. Both sides currently sit outside the relegation zone, but neither club are mathematically safe just yet. In terms of the hosts, Moseley (12th) require just a single point in Round 30 to confirm their place in National One next season and that is mainly due to their recent run of four wins from their last six games.

“I’ve never been in a team which has been relegated and I am sure a lot of the lads won’t want to experience relegation either.”

It is a huge weekend in #Nat1 and Caldy are battling to stay up. We chatted to winger Nick Royle

In terms of Caldy, they travel to the Midlands after a superb revival. Back to back wins against Darlington Mowden Park and Rosslyn Park has lifted Gareth Davies’ side out of the bottom three and now the Wirral outfit sit two points clear of the drop. Davies jokily told us this week that a bonus-point draw would suit both teams, but there is no doubt Caldy will be going for a hat-trick of wins which would guarantee their place in National One for the 2019/20 campaign.