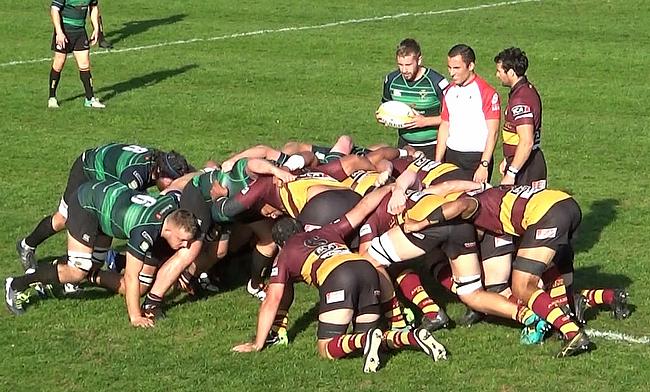 After a weekend away from rugby last Saturday, National One resumes for Round 11 and the battle for pole position returns in some style.

Currently, the top eight sides in the division are separated by just five points and as things stand, it is Blackheath who lead the way.

‘Club’ face seventh placed Cinderford this weekend as they aim to extend their winning run to six matches while it is second against fourth when Old Elthamians meet Ampthill and District.

Five wins in a row saw Blackheath enter the first break in the season at the summit of National One. James Shanahan’s side have manoeuvred themselves through the frenzy that is the promotion race to sit top of the pile as we begin the run-up to Christmas.

‘Club’ are level on points with second placed Old Elthamians and they can remain in pole position by clinching a fifth away win of the campaign against Cinderford this weekend. Paul Morris’ men are also going along nicely as the Foresters have won three of their last four games which has lifted them into the top half of the table. Cinderford, who earnt promotion into this division last season, are also just five points off Blackheath so a fourth home win of the campaign would keep them firmly in this ever-changing title race.

Old Elthamians are starting to become an ever-present towards the right end of this division. Over the last month, Gavin Lach’s side have either been in or around top spot and that is due to them suffering just one defeat from their last six games. That run of form has left OEs level on points with league leaders Blackheath and the Mottingham club are only second because they have won one less game than the table toppers.

THE STORY SO FAR ??|
After 10 games of the most open and eagerly contested National One campaign for years, head coach Sam Howard assesses @elthamians progress so far. ?? https://t.co/DHpgZgpXNh #Nat1 @TalkRugbyUnion pic.twitter.com/1gLU09xa8j

Old Elthamians will be aiming to continue their excellent form in Round 11, but it won’t be easy when they face another promotion candidate in the shape of Ampthill & District. The Bedfordshire side have sprung into life in recent weeks and head to College Meadow having won their last three matches. The A’s are also just three points off OEs so this is set to be an intriguing contest on Saturday afternoon.

Rosslyn Park will certainly have an eye on proceedings in Gloucestershire and in London as the third placed side aim to put pressure on the top two in National One. A four-match unbeaten run has left Kieran Power’s side just two points off the submit and their latest performance suggests they are not going to fade away from this title race.

Last time out, Park snatched a draw against Chinnor to maintain their positive form and they will be firm favourites to extend their excellent sequence of results when they host Esher this weekend. The visitors arrive at the Rock currently in the relegation zone having lost their last three matches. Ricky Nebbett’s men are only two points from safety, but Park have not lost at home all season so Esher could be in for a tough contest in Round 11.

Rotherham Titans would have headed into last weekend’s break feeling a little deflated. After five straight wins – which had put their slow start to the season to bed – Joe Barker’s side fell to a loss away at promotion rivals Ampthill and District in Round 10. However, it is far from doom and gloom for the Yorkshire outfit as they sit just four points off the leaders and they will be aiming to bounce straight back when they entertain Cambridge on Saturday.

In our latest edition of Titans TV we speak to Assistant Coach @christianhead and players Zak Poole and Henry Roberts. Check out what they had to say here: https://t.co/lg3SRy1m02 pic.twitter.com/uozuI7eSM1

The Blood and Sand will be looking to continue building up the National One table in their last six games before Christmas as they currently occupy 10th place and they are seven points clear of the drop zone. Richie Williams’ side come into this fixture having won two matches away from home and with one of those aforementioned victories occurring against Ampthill, Cambridge will be hoping to topple another promotion candidate this weekend.

After leading the way in National One in the middle of October, Caldy’s season has been tempered slightly in recent weeks. Simon Verbickas’ men are still only five points behind Blackheath, but back to back defeats against ‘Club’ and Cinderford has seen them slip to sixth in the league standings.

It is far from disastrous for the Wirral outfit, but they will be eager to return to winning ways against Bishop’s Stortford in Round 11. The hosts on Saturday are just about keeping their heads above water because as things stand, Andy Long’s side are two points clear of the relegation places. The men from Silver Leys have also lost their last four games – the worst run of form in the league – so a first home win since September would be most welcome for Stortford.

The last three weeks of action have been nerve-shredding for Chinnor. Two late draws have bookended a last-gasp victory at Darlington Mowden Park for Matt Williams’ side, but despite the drama and tension, the Black and Whites may have been pleased by the overall outcome. Before this run of form, the Oxfordshire outfit had lost back to back fixtures, but now they are still very much in the promotion picture heading into Round 11.

However, Chinnor will be keen to improve on one win from their last five games and they may fancy their chances to do just that when they visit Birmingham Moseley. The Midlands club currently sit in the bottom three and they would have been kicking themselves before last weekend’s break. Richard Protherough’s men picked up their second win of the campaign against Sale FC in Round Nine, but in Round 10, they lost to bottom of the table and rivals Loughborough Students. Moseley are only three points from safety so back to back home victories would be the perfect way to kick-off the next series of fixtures.

Last year, Darlington Mowden Park and Plymouth Albion were battling towards the right end of the division. Both sides were the nearest challengers to eventual champions Coventry, but this season, DMP and Albion are struggling to recapture that form. In terms of Darlington, they sit ninth in the table and five wins and five defeats shows you exactly how patchy they have been in this campaign.

Danny Brown’s side do host Plymouth this weekend after ending a run of three straight defeats against Esher last time out, whereas Albion take the long trip north having lost their last two matches. Like Darlington, the men from Brickfields have been frustrated by their inconsistency and Kieran Hallett’s side find themselves 11th in the table and five points behind this weekend’s opposition. Both teams will be hoping they can really ignite their respective seasons in the lead up to Christmas and a victory this weekend may provide the spark they are looking for.

One of Sale FC’s top performers in recent years headed home this week as Chris Johnson departed Heywood Road to return to National Two North side Huddersfield. Johnson played an integral part in Sale’s journey to National One and Jonathan Keep’s side will now continue their progress without their influential fly-half.

On the flip side, there is still an awful lot of talent in the Sale ranks and the side promoted into this division in April will be keen showcase their qualities in order to turnaround a dip in form. The Manchester-based club enter Round 11 after three straight defeats, but they take on bottom of the table Loughborough Students this Saturday. The Midlands side are five points from safety, however, two wins from their last three matches has breathed new life into their season. Sale suffered their first home defeat of the campaign the last time they were on their own patch so can Loughborough inflict another defeat on their hosts this weekend?