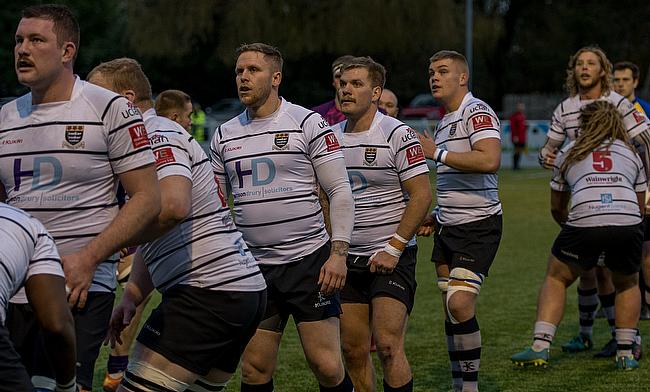 The Christmas decorations are beginning to be unpacked and Shakin’ Stevens seems to be constantly on the radio as the final weekend of November is upon us. Photo Credit: (Mike Craig)

Whilst the festivities begin to take shape, it is business as usual in the National Leagues with four more fixtures to be played before our 48 clubs put their feet up in front of the fire and enjoy a mince pie or three.

There will be no early Christmas gifts handed out across all three divisions, especially at the summit of National One. Rosslyn Park and Richmond are currently level on points, but the top four are only separated by five points heading into Round 13 this weekend.

The standout fixture from the third tier on Saturday sees league leaders Park take on third-placed Rams in Berkshire whilst in National Two, all eyes are on the wrong end of the table for the second week running.

In National Two North, Luctonians face Preston Grasshoppers with both clubs determined to move out of the drop zone and the same applies to Sutton & Epsom and Bournemouth who meet at Rugby Lane.

Below is a more-depth preview of this weekend’s action as the penultimate month of the year draws to a close.

Rosslyn Park head to Old Bath Road having moved to the top of National One as the title race in the third tier ignited last weekend. After beating promotion rivals Richmond in Round 11, Park followed that up with an excellent display against Hull Ionians and their victory at the Rock was made even sweeter.

Richmond fell to an 8-7 defeat at Sale FC which allowed Kieran Power’s side to edge themselves to the summit and they sit in pole position by virtue of ‘Games Drawn’ as they are level on points with their near neighbours. However, this Saturday will provide another examination of their title credentials when they visit third-placed Rams, who continue to shine. Following promotion in April, Seb Reynolds’ men have not looked back and come into this weekend’s clash with Rosslyn Park having won three of their last four matches.

Here's your @Rams_RFC side for our first ever league fixture against @rosslynpark tomorrow at OBR 14.00hrs KO. The @Rams_Titans game vs Rosslyn Park Rangers has unfortunately been cancelled. #HeartheOBRroar #Nat1Rugby #Ramily pic.twitter.com/U2GT1DAdZH

The Rams could add further spice to the title race with another victory and Richmond will certainly have one eye on proceedings in Berkshire when Steve Hill’ side welcome Plymouth Albion to the Athletic Ground. The sides last met on the final day of the 2015/16 National One season with the Devonshire outfit coming out on top in 40-39 thriller.

Richmond will be hoping history doesn’t repeat itself as they look to end the month by returning to winning ways following successive defeats whilst Albion, who sit one place above the relegation zone will be keen to record their first win on the road of the campaign. Plymouth are 11 points clear of the drop at the moment, but they will look to capitalise on Richmond’s recent hiccups in order to keep them away from any relegation scrap.

The final standout game in National One sees two teams who can certainly work their way into the frame for top spot. Fifth placed Cinderford picked up an excellent away win at Rotherham Titans in Round 12 and three victories on the bounce leaves them eight points behind table toppers Rosslyn Park, but crucially, Paul Morris’ men have a game in hand.

The Foresters will want to continue their momentum when they host Old Elthamians, but the visitors to Gloucestershire will be keen to maintain their own positive run of results. OEs have lost just one of their last four fixtures and the seventh-placed side sit one point behind Cinderford as we enter Round 13. It may not seem it, but this clash at Dockham Road could really provide a springboard for either club as they look to manoeuvre their way into the race for top spot.

Elsewhere in the division this weekend, Blackheath (4th) host a struggling Rotherham outfit at Well Hall, Chinnor entertain Cambridge and Darlington Mowden Park welcome Birmingham Moseley to the North-East. Meanwhile, Sale FC will be eager to end their away day woes at Hull Ionians and Canterbury’s search for their first win of the season sees them travel to Bishop’s Stortford.

We start our National Two North preview with a team which just keeps on winning. Caldy have strung 11 straight victories together this term and their brilliant consistency finally saw them move to the summit of the division last weekend. Gareth Davies’ side grinded out a 16-11 win over Wharfedale and coupled together with Fylde’s surprise loss at home to Hull, the Wirral outfit now sit two points clear with a game in hand still to play.

Caldy will now be targeting win number 12 when they host Huddersfield on Saturday and the Yorkshire side have not been able to hit the heights of last season where they finished in fourth-place.  Gareth Lewis’ men have won just one of their last six games and it means Field sit just three points clear of the drop zone. A victory at Paton Field would be a superb way to enter December, but the task facing Huddersfield does seem to be a daunting one.

Second-placed Fylde will be itching to bounce back at the first attempt in Round 13 after a disappointing result last time out. Warren Spragg’s side were stunned by Hull at Woodlands and their first home defeat of the campaign was enough to knock the Lancashire club off top spot.

Fylde are still in a strong position in terms of the race for the top two and they will be keen respond on Saturday when they visit Otley. The hosts had begun this month with three straight wins, but successive away losses against Sheffield Tigers and Sedgley Park, respectively, means the Yorkshire club are now seven points clear of the bottom three rather than edging themselves into the promotion picture. Both clubs at Cross Green will be desperate to taste that winning feeling this weekend.

As highlighted in both Huddersfield’s clash with Caldy and Otley’s fixture against Fylde, the bottom half of National Two North is starting to become very tight. Luctonians and Preston Grasshoppers are in the thick of things towards the wrong end of the table and the sides meet at Mortimer Park in a crucial game.

The Lucs come into Round 13 on the back of a vital and impressive triumph over rivals Scunthorpe and last Saturday’s win, combined with credible displays against Otley, Sedgley Park and Fylde, means Ryan Watkins’ side are only two points from safety. As for Hoppers, head coach Paul Arnold will be keen to see his charges cut out the small errors which have been costing Preston in recent weeks. The men from Lightfoot Green have won just one of their last eight matches and their dip in form means the Lancashire club are four points off safety. As we approach the midway point in the season, this already feels like a massive fixture in the campaigns of both sides.

Also across National Two North this weekend, it is third against fourth as Sedgley Park travel to Sheffield Tigers whilst Tynedale face Chester and Loughborough Students entertain Wharfedale. Elsewhere, Stourbridge and Hinckley meet in an all-Midlands affair and Hull host Scunthorpe in another intriguing fixture towards the foot of National Two North.

Gary Kingdom knows there is still a long way to go in the season, but Taunton Titans’ talisman has not shied away from his side’s ambitions this term. The Somerset club currently sit two points clear at the top of National Two South following a fine individual display from the former Exeter Chief last weekend. Taunton claimed a hard-fought 22-15 win over Bury St Edmunds to stay at the summit and remaining in pole position is a small achievement itself.

The Titans have been jostling for top spot alongside the likes of Tonbridge Juddians and Henley Hawks over the last few weeks, but very much in the frame to challenge the top three sides are Taunton’s opponents on Saturday; Leicester Lions. Gareth Collins’ men are fifth in the table and seven points off second-placed TJs. Considering this is the Lions’ first ever campaign in the division, they are continuing to impress and six wins from their last seven games is mightily impressive form to be carrying into December. The Midlands club have also won all of their home matches this term so this could be a cracker at TMDP Park.

Tonbridge Juddians responded immediately to their 23-22 defeat to Clifton as they battled to a victory at home against Esher in Round 12. Peter Dankert’s side are just two points off table toppers Taunton Titans, but perhaps more importantly, TJs are one point clear of Henley Hawks so the pressure to succeed remains high at the top of the division.

Just one point separates the top three in #Nat2s heading into this weekend and whilst he is open about Taunton Titans' aims, Gary Kingdom knows being at the summit in November doesn't count for anything👀

Next up for the men from the Slade is a trip to the capital to face Barnes. The London-based club currently sit one point above the drop zone after just one victory from their last nine games. Recent wins for the likes of Westcliff mean fight for survival is slowly starting to intensify so any points gained this weekend for Barnes could prove to be vital.

Hunting down Barnes are both Sutton & Epsom and Bournemouth and the two sides meet in a potentially pivotal clash on Saturday afternoon. S&E were involved in a similar scenario in Round 12 and Jeff Parsons’ side came away from Old Redcliffians with a share of the spoils following a 10-10 draw.

The Black and Whites are now just three points from safety and they may fancy their chances against a Bournemouth side who currently prop up the division. The Lions are on a six-match winless run, but they were so close to stopping the rot last time out. A victory was snatched away from right at the death gainst Leicester Lions so there will be positives for Richard Sharp to carry into this crucial clash as Bournemouth look to dig themselves out of trouble.

Elsewhere in National Two South, third-placed Henley Hawks go to Dings Crusaders as they look to keep the heat on the leading duo whilst an in-form Clifton host Westcliff. Also this weekend, Redruth entertain Old Redcliffians, Esher welcome Old Albanian to Molesey Road and Bury St Edmunds take on Worthing Raiders, who will be gunning for five straight wins.