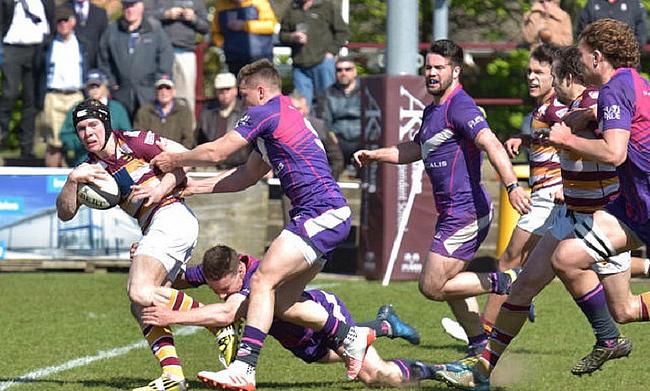 This weekend could be crucial for teams aiming to retain their status in National One for next season as the fight to avoid the drop continues in Round 29.

As we know, Fylde have already been relegated, but the two other sides that currently occupy the National One relegation spots are Old Albanian and Loughborough Students.

In terms of OAs, they have won five of their last six matches and despite their good form, they are still six points from safety so a victory against Plymouth Albion could boost their survival chances.

However, their fate is out of their hands whereas for Loughborough, they have control of their own destiny. The Midlands club are three points off 13th place, but they do have a game in hand so a positive result away at Fylde this weekend would keep them on course for safety.

As things stand, it is Hull Ionians who are currently sitting in the final safety spot in National One, but they face a tricky test at home to third placed Ampthill and District this Saturday. However, the I’s are coming up with the results when it matters most and they will be aiming to produce another victory on their home turf.

Elsewhere, both Esher and Cambridge can secure their place in National One for next season if they can pick up their desired results against Bishop’s Stortford and Caldy, respectively, while at the top of the division, champions Coventry take on second placed Darlington Mowden Park.

Also in National One this weekend, Blackheath host Old Elthamians in a battle for fifth place and Birmingham Moseley entertain a Rosslyn Park side who could do with a positive result as they look to steer clear of the relegation fight.

At the end of February, Coventry knew the title was nearly theirs. A win over second placed Darlington Mowden Park at the Northern Echo Arena saw them take a huge leap towards promotion and three weeks later, Rowland Winter’s side confirmed their place in the Championship for next season. Since then, Cov have been aiming to carry their sensational form into the 2018/19 campaign so they would have been frustrated by their defeat to third placed Ampthill and District in Round 28.

But, the newly crowned champions are back on home soil this weekend for the penultimate time this term aiming to continue their wonderful unbeaten streak at Butts Park Arena. Cov have not lost on their own turf since October 2016, but if anyone can halt this 25-match run, it could be Darlington Mowden Park. Danny Brown’s men ended their home campaign in style last weekend with a 40-7 win over Fylde which secured a top two finish. It has been a brilliant season for the north-east outfit and after missing out on the title to Coventry, they will be relishing the chance to gain a victory over the champions in Round 29.

After falling to a narrow defeat against Darlington Mowden Park in Round 27, Ampthill and District responded in the best way possible as they produced a commanding display to inflict only a second loss of the season on table toppers Coventry. Head coach Paul Turner described his team’s performance as ‘outstanding’ and it means the A’s are on track for another third placed finish.

This Saturday it's our last home game of the season when we play Ampthill, 3pm KO. Please can you show your support for our boys on the field, after the last two victories, they deserve it. pic.twitter.com/cUH6GgaDA8

The Bedfordshire side can edge closer to the bronze medal when they travel to Hull Ionians this weekend, but the hosts will be fired up as they continue to fight for survival. This time last year, the I’s strung together a series of results which guided them to safety and 12 months on, lightening appears to be striking twice. The Yorkshire outfit welcome Ampthill to Brantingham Park having lost just two of their last eight games which leaves them three points above the drop zone. A recent win at home against fourth placed Plymouth Albion highlights how strong Hull are on their own patch and another triumph in Brough this weekend would keep them on course for a fourth year at this level.

Plymouth Albion bounced back from two straight defeats with a hard fought win over Birmingham Moseley in Round 28 to keep them in the hunt for a top three finish. Head coach Kieran Hallett described the win as both ‘sublime’ and ‘frustrating’ as Albion battled to their 10th victory of the season at Brickfields to leave them seven points behind third placed Ampthill and District.

Albion do have two games in hand so the ball is in their court, but to keep in control of their own fate a first away win since the end of February needs to occur this weekend. However, like the aforementioned Ampthill, Plymouth take on a side fighting for their lives as they travel to Old Albanian. Gavin Hogg’s men could hardly have done more over the last few games because despite winning five of their last six matches, OAs find themselves six points off safety with just two games left in the season. The Hertfordshire side have shown exactly what they are capable of over the last two months and they know they must continue their excellent recent performances if they are to stay in this division.

After moving up to fourth place in the division following a victory over Cambridge, Blackheath fell back down to fifth in the league standings after a disappointing loss away at Caldy in Round 28. ‘Club’ were far from their best and even though this has still been a very positive season for James Shanahan and his side, they seem to be limping towards the finish line. Just one win from their last four matches will have been frustrating for the men from Well Hall and Shanahan will be looking for a reaction when they host Old Elthamians this weekend.

This fixture sees fifth take on sixth so a win for Blackheath would guarantee them a top five finish, but Old Elthamians will have other ideas. This week, Director of Rugby Gavin Lach signed a new two year deal with OEs and it is just reward for the work being done at College Meadow. After promotion via the National Two play-off last term, OEs have not looked back and the top six in National One is now a realistic possibility. That can be confirmed this Saturday if they pick up a bonus-point win in London and OEs will be eager to perform after losing to Old Albanian last weekend.

It is no secret that Birmingham Moseley are hoping to mount a title challenge next season as they look to return to National One, but their current campaign is in danger of petering out. Richard Protherough has done an excellent job steading the ship this term, but a loss to Plymouth Albion last weekend was Moseley’s third on the spin which has seen them fall away from a possible top five finish. Instead, the men from Billesley Common will have their eyes on sixth place and with Blackheath taking on Old Elthamians this Saturday, they could edge closer to that target.

However, they will have to overcome the challenge of Rosslyn Park who travel to the Midlands still with something to play for. A narrow defeat to Hull Ionians in Round 28 means Kieran Power’s side are not safe from relegation just yet and with three games to go in their season, they sit five points above the drop zone. While the teams below have picked up vital wins in recent weeks, Park have failed to do so but they can take a huge step to securing their status in this division by clinching a third away win of the campaign this Saturday.

Following a thumping of Fylde in Round 27, Bishop’s Stortford’s inconsistent 2018 reared its ugly head once again as they fell to a defeat away at relegation threatened Loughborough Students last time out. It really has been a season of two halves for Andy Long’s side, but in terms of the overall picture, the men from Silver Leys have to be pleased with their maiden campaign in National One. With two games to go, Stortford are six points clear of ninth placed Caldy so a home victory over Cambridge this Saturday would secure a top half finish for the Hertfordshire club.

As for the visitors, back to back wins over Old Albanian and Hull Ionians in March looked to have made sure that Cambridge would be playing at this level next season, but successive losses coupled together with the form of the teams fighting for survival, may have set some alarm bells ringing at Volac Park. The Blood and Sand head into this clash six points clear of the drop zone, but a win on the road this weekend would edge them closer to safety once again.

It has not been confirmed yet, but Caldy’s place in National One for next season is almost guaranteed. A superb win over Blackheath last week means they require a maximum of five points from their final two matches to secure their status at this level after a wonderful campaign for the Wirral outfit. Considering this is Caldy’s first taste of National One rugby, they have not been involved in a relegation battle across the course of this season which is testament to the work Simon Verbickas and his coaching staff have done at Paton Field.

For their final away outing of the year, they head to Esher, who like Caldy, are creeping closer to safety. An excellent victory on the road against Cambridge last time out means the Surrey-based side are 10 points clear of the relegation places with two games to go so a victory in their final match of the season at Molesey Road would leave them on the cusp of another campaign in National One.

Loughborough Students head to Fylde in Round 29 in control of the relegation battle. While their rivals all have two matches left this term, the Students have three, but their game in hand has only become significant because of the form Loughborough are currently producing. An unbeaten streak of three matches has left them just three points off safety and this weekend seems like a golden opportunity for the Midlands club to lift themselves out of the bottom three.

With Hull Ionians taking on an Ampthill side which recently beat champions Coventry, a win for Loughborough at already relegated Fylde could see them move out of the relegation places heading into the final scheduled weekend of the campaign. However, this fixture is Fylde’s last home match in National One and after a tough campaign for Warren Spragg’s side, they will want to put on a show at Woodlands on Saturday and they are more than capable of doing that and halting Loughborough’s survival charge in the process.