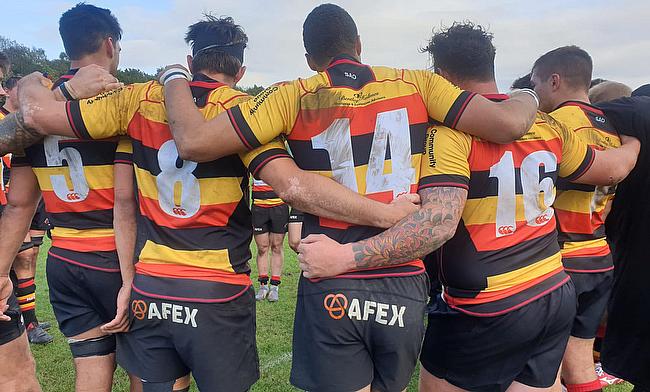 Richmond and Rams RFC are now the top two in National One as they ended September with four wins out of four. (Photo Credit Kate Clements/Richmond)

The two clubs are the only teams in the division who are unbeaten after Cinderford and Rosslyn Park tasted defeat in Round Four against Birmingham Moseley and Blackheath, respectively.

Richmond brushed aside Hull Ionians whilst Rams left it very late to claim a victory against Chinnor and now the current top two will be preparing to face one another in Round Five.

Elsewhere in National One, Darlington Mowden Park clinched narrow win in a pulsating contest against Bishop’s Stortford and Old Elthamians bounced back from two straight defeats in an ill-tempered affair with Plymouth Albion.

Meanwhile, Sale FC made it two victories on the spin as they defeated Canterbury and it was back to winning ways for Rotherham Titans as they beat Cambridge.

Richmond’s excellent form continued with an eight-try hammering of Hull Ionians in National One.

Rob Kirby scored twice in the first half and tries from Jake Parker as well as Toby Saysell gave the visitors a 26-0 lead at half-time.

Hull Ionians hooker Ben Stephenson crashed over at the start of the second-half, but that was as good as it got for the Yorkshire outfit.

Saysell’s second plus scores from Tom Pashley, Hamish Graham and Toby Dabell clinched the bonus-point which sent Richmond to the summit of National One.

Henry Bird scored a late try as Rams RFC came from behind to beat Chinnor to move up to second place in National One.

But Robbie Stapley’s try sparked the fightback before Bird raced over at the death to snatch victory from the jaws of defeat.

Chinnor had led 14-3 at the break after tries from Jason Worrall and Chris Elder, with Alex Seers slotting over a penalty for the hosts.

Rams flew out of the traps after half-time as Bird and Conor Corrigan both crossed, but Chinnor held the advantage following Elder’s superb second score.

However, Chinnor’s ill-discipline allowed Rams back into the contest and late tries from Stapley and Bird snatched a fourth consecutive win for Seb Reynolds’ side.

Birmingham Moseley handed Cinderford their first National One defeat of the season as they clinched an excellent win at Dockham Road.

Flanker Morgan Dawes scored a hat-trick for Moseley whilst Ben Palmer kicked 12 points for the visitors.

Nathan Taylor as well as Ed Sheldon both crossed in the first period for the home side and the latter’s second try of the afternoon did give Cinderford some hope.

However, Moseley were able to see out the rest of the contest to end September in third place.

Blackheath produced arguably their best performance of the season as they secured a bonus-point win over the previously unbeaten Rosslyn Park.

The hosts came into Round Four as the league leaders, but ‘Club’ halted their three-match winning run at the Rock.

A score from Ben Ransom and a penalty try were cancelled out by Park as efforts by Mike McFarlane and Hugo Ellis made the game all square at 14-14 at the break.

However, Blackheath controlled the scoreboard in the second period as Tom Burns and Freddie Owen crossed to wrap up and excellent win for James Shanahan’s side.

Tries from Shaun McCartney, Brandon Asher-Wood and Euan McKirdy gave Darlington Mowden Park a 21-10 lead, with Seb Brownhill going over for the home side.

Stortford hit back as Tom Walker’s penalty was followed by a brace of tries from Charlie Kingham to give the hosts a two-point lead.

However, a penalty and a try from the impressive Warren Seals put DMP back in front and despite Luis Ball crashing over to make it 31-30, Darlington stood firm in defence to cling on to the win.

Old Elthamians overturned a half-time deficit to beat Plymouth Albion in a contest which saw both teams receive a red card.

Albion led 10-6 at half-time thanks to a converted try and penalty from Dan Mugford, with Tom White replying for OEs.

OEs looked stronger at the start of the second period as George Perkins crossed and White also landed a penalty, however, the main talking point of the match occurred shortly after.

Plymouth’s Rus Tuima and OEs Perry Parker were both sent off for violent conduct, but OEs were able to extend their lead via the boot of White despite also having flanker Adam Batt yellow-carded.

Albion then exploded back into this encounter as Alex Ducker scored an excellent try to make it 17-17, but OEs were able to secure their second win of the campaign in the final 10 minutes as another penalty from White was followed by a Louis Brown try.

Sale FC clinched back to back victories as they brushed aside Canterbury in Kent.

Sale Sharks youngster Teddy Leatherbarrow opened the scoring for the visitors and the away side held a 5-0 lead at the break.

Canterbury were trying to capitalise on Sale errors, but Jonathan Keep’s men were able to move 20-0 ahead thanks to tries from Ollie Longmore, Jeremy To’a and Patrick Ah Van.

The hosts did pull one back through Charlie Connolly, but Sale had the final say as Raffie Quirke nipped down the blindside to seal the victory.

Rotherham Titans produced an excellent first half performance against Cambridge at Clifton Lane to seal their second win of the season.

Anthony Maka, Dan Leake and Zak Poole all crossed for the hosts, who led 22-14 at the break.

Cambridge scrum-half Finlay Creighton scored a brace in the first half, but the Blood and Sand could only manage a penalty via Ben Penfold in a second period which they dominated.

Penfold did have two other opportunities from the tee, but the Titans were not punished as they held on to secure back-to-back home victories.