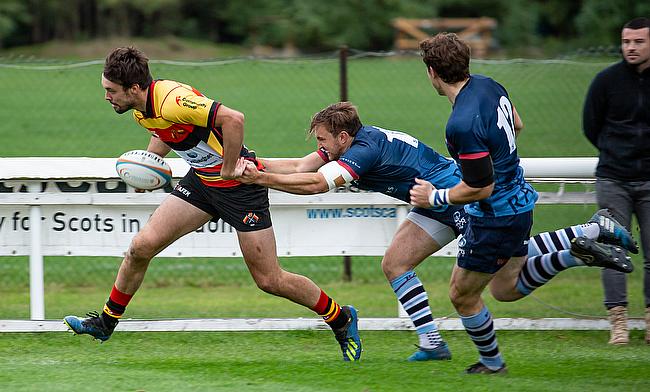 Richmond kept up their winning start to the National One season as they defeated Rams RFC in an early top of the table battle. (Photo Credit: Dante Kim Photography)

Steve Hill’s side have picked up five successive victories since relegation from the Championship and the London-based club are now four points clear at the summit of the division.

Rosslyn Park have moved up to second after an excellent second-half display earnt them a victory at Sale FC whilst Birmingham Moseley’s good form continued against Rotherham Titans.

Fourth-placed Cinderford left it late once again to snatch an enthralling victory over Darlington Mowden Park and Chinnor were also on the right end of a thrilling win against Bishop’s Stortford.

Elsewhere, Blackheath cruised to a victory over Hull Ionians, who are still searching for their first points of the campaign, whilst Plymouth Albion produced a gutsy performance to defeat Canterbury and Old Elthamians battled past Cambridge.

Richmond have moved four points clear at the top of National One as they defeated Rams RFC at the Athletic Ground.

The hosts led 20-12 at the break, with Jake Parker and Ross Grimstone crossing for tries, while Conor Corrigan and Alex Humberstone responded for Rams.

Rob Kirby had kicked 10 first-half points for the home side and after Alex Seers had nudged a penalty for the visitors, the full-back converted Hamish Graham’s try to keep Richmond in command.

Kirby landed another penalty before both sides scored a try apiece late on as Humberstone’s second score was cancelled out by Charlie Gibbings, who wrapped up a fifth straight win for Richmond.

After suffering their first defeat of the season, Rosslyn Park produced an immediate response as they beat Sale FC in Round Five.

Park led 17-10 at the break following tries from Joe Munro and Arthur Ellis, but in the second period, the visitors cut loose.

Owen Hughes, Benji Marfo, Craig Holland and Jack Gash all crossed after the interval as Park moved up to second spot in the division.

Sale were unable to handle Park’s second-half display with their points coming via a Fergus Mulchrone try and the boot of Chris Johnson.

Rotherham Titans were denied their first away win of the campaign as an in-form Birmingham Moseley came from behind to edge this contest.

The Titans controlled the scoreboard in the first half as Lewis Wilson’s try and two penalties from ex-Moseley man Sam Hollingsworth gave the visitors an 11-3 lead.

However, the hosts clicked into gear after the restart as Aaron Crofts and Oli Morris both touched down to put Moseley four points ahead.

Rotherham did put pressure on the Moseley defence, but their execution wasn’t on the money as the home side held out for their fourth win of the campaign.

After trailing 16-0 at half-time, tries from Matt Gilbert and Mullis as well as 10 points from the boot of James Butler had given Cinderford the lead with 15 minutes remaining.

Warren Seals kicked his fourth penalty of the afternoon for DMP to cut the deficit to a single point and when Callum MacKenzie darted over to add to Brandon Asher-Wood’s earlier score, the hosts may have thought they had done enough to seal the win.

However, Cinderford served up some more late drama as Mullis barged his way over to snatch the victory at the Northern Echo Arena.

Hull Ionians are still searching for their first points of the season as they were well beaten by Blackheath at Well Hall.

Henry Staff’s fourth-minute try was built upon by Jake Lloyd, Freddie Owen and Mike Perks as Club led 24-12 at the break, with Jack Colbourne and Tom Peters both crossing for Hull Ionians.

The Yorkshire club weren’t out of the game at the interval, but Blackheath made sure any hopes of a revival by the visitors was snuffed out as Freddie Gabbitas slotted two penalties before Ben Ransom crossed the whitewash.

Josh Pearce scored Hull’s third try of the afternoon as they aimed for a bonus-point, but the final score at Well Hall went to Blackheath as Craig Dowsett charged over to seal Club’s third win of the season.

Tom Walker’s penalty looked to have handed Stortford their first win of the season since the opening day, but Chinnor battled back as Worrall scooted over to seal the victory.

Nick Selway’s two tries alongside scores from Luc Jeannot, and Kieran Goss earned Chinnor the bonus-point whilst this was another narrow defeat for the away side.

Chris Smith (2), Walker and Sam Winter all crossed for Stortford, but for the third week running, a tight scoreline didn’t go in their favour.

Plymouth Albion produced a second-half performance full of character as they fought back with 14-men to earn a remarkable victory against Canterbury.

Canterbury led 17-8 at the interval thanks to tries from Charlie Grimes and Ricky Mackintosh, with Harvey Young kicking seven points for the City Men.

But that was only half of the story in the first period as Josh Skelcey was sent-off for Albion and injuries to Dan Mugford as well as Luke Chapman completed a torrid opening 40 for the hosts.

Big hand to the @AlbionRFC lads for their patience, pressure and tempo yesterday. To out work a side when down to 14/13 men is testament to your hard work away from game day. @DanMugford10 and @LukeChapman3 we got you boys #AlbionAsOne

However, Plymouth rallied superbly in the second-half as a brace of tries from Sam Daly, to add to Lewis Pearson’s earlier effort, gave the home side the lead.

Another penalty from Young edged Canterbury back in front and when Sam Morley received a yellow-card, Albion were on the back foot once again.

However, they managed the game well and Connor Eastgate’s drop goal and two penalty kicks put them 31-20 ahead.

Eastgate landed another penalty before Plymouth wrapped up the win as Morley crossed for their bonus-point score.

Old Elthamians secured back-to-back victories as they battled to a hard-fought win over Cambridge at Volac Park.

A Bryan Hotson try saw OEs move into an early 5-0 lead, but they trailed 14-12 at the break as Cambridge hit back through James Martin and Mike Mayhew.

Ollie Claxon had squeezed over for the away side before the interval and OEs were able to go in front shortly after half-time as Tom White converted his own try before landing a penalty.

The fly-half slotted over another three points to keep OEs in control and it was enough for Gavin Lach’s side to seal the win.