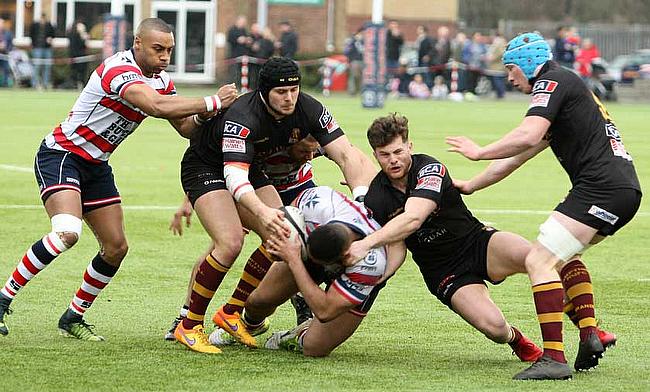 Rosslyn Park and Ampthill & District will have their sights set on a victory on Saturday as both sides look to remain in the promotion battle in National One.

The A’s currently sit one place and one point above Park as we enter Round 13 and victory for either side at the Rock will only enhance their promotion credentials in this ever-changing race for top spot.

As things stand, it is Blackheath who occupy pole position in the division and they will be hoping they can stay there when they visit Bishop’s Stortford on Saturday while second placed Old Elthamians host Caldy.

Chinnor, who are third, go to bottom of the table Loughborough Students this weekend and the latter will be aiming to pick up some crucial points as they continue to dig themselves out of trouble.

Alongside the Students in the bottom three are Esher and Birmingham Moseley who take on Sale FC and Plymouth Albion on Saturday while elsewhere, Rotherham Titans entertain Cinderford and Darlington Mowden Park face Cambridge.

Top against bottom may have been a foregone conclusion on paper, but league leaders Blackheath had to battle hard against Loughborough Students in Round 12. ‘Club’ clinched a 39-32 victory at Well Hall to more a point clear at the summit of National One as they extended their unbeaten run to seven matches.

James Shanahan’s side are impressively setting the pace thus far in this intriguing title race, but hoping to stop them in their tracks will be Bishop’s Stortford on Saturday. The hosts enter December with a spring in their step as they ended a winless run of five matches by beating Cinderford last weekend. The result leaves Andy Long’s men just outside the bottom three and a victory over the table toppers in Round 13 would be the perfect start to the festive period.

Two sides who were promoted into National One in 2017 meet at College Meadow on Saturday as Old Elthamians host Caldy. Both teams had very satisfying debut campaigns in this division last season, but they have really kicked on this term. OEs continue to stay in the promotion race and the second placed side extended their unbeaten run to six matches last week after a gritty victory over Cambridge.

Gavin Lach’s side aren’t going anywhere any time soon and Caldy will be aiming to stick with OEs. The Wirral outfit currently sit six points off the lead as a narrow defeat against Rotherham Titans in Round 12 saw them lose ground with the front-runners. One win from their last four fixtures needs to be improved upon if Caldy want to stay in the title picture and if they were to become the first side to beat OEs on their own patch season, then Simon Verbickas’ men would certainly be back in the hunt.

There was another slice of late drama for Chinnor in Round 12 as Craig Holland’s try made sure that the Oxfordshire side secured a victory over Sale FC. Matt Williams’ men have been involved in some fascinating clashes in recent weeks, but Chinnor have been on the right end of the results on multiple occasions.

The Black and Whites head into Round 13 on an unbeaten run of five games and they may fancy their chances of extending their recent form against bottom of the table Loughborough Students this weekend. However, the Midlands club won’t roll over that easily. Alan Buzza’s side continue to pick up vital points and despite only securing two wins all term, they find themselves within touching distance of the safety positions. Loughborough currently have 10 bonus-points to their name and they may need to be at their resilient best once again when they host third placed Chinnor on Saturday.

The game of the weekend in National One comes from the Rock as promotion candidates Rosslyn Park host Ampthill and District. As things stand, Park sit four points behind leaders Blackheath as we begin the final month of the year and after suffering a surprise defeat against Esher in Round 12, Kieran Power’s side produced the perfect response last weekend.

https://t.co/wfZpJszAJl We’re in #Nat1 where @rosslynpark return a box kick with interest as they break through the middle of the field and spread it wide to open-side Arthur Ellis who slides over for the try ???? pic.twitter.com/G96sy1zajG

Park ended November with an excellent win away at Plymouth Albion and the fifth placed side have the chance to go ahead of Ampthill with a victory on Saturday. In terms of the visitors, they sit one point and one position ahead of Rosslyn Park and their recent form has kept them in the thick of the title race. The A’s are unbeaten in five matches, but if they harbour any promotion ambitions, they must improve on their away form. The Bedfordshire club have picked up just one win on the road all term so they will be looking to double that figure in the capital this weekend.

An excellent second-half performance against Caldy allowed Rotherham Titans to return to winning ways. Joe Barker’s men had suffered back to back defeats against Ampthill and Cambridge, but concluded November with a thrilling 33-29 win in Cheshire. The result has sparked their promotion bid back into life as the Titans now sit six points behind Blackheath as we begin the festive period.

The Yorkshire outfit haven’t tasted victory at Clifton Lane for just over a month and hoping to delay that feeling will be Cinderford. Paul Morris’ side would have been massively frustrated to fall to a home defeat against Bishop’s Stortford last time out because the Foresters are now 10 points off the leaders heading into Round 13. The men from Dockham Road have the chance to bounce back this weekend and after beating possible promotion candidates Caldy in their last away fixture, they will be keen for a similar result against another title chasing side.

Before last weekend, the door had creeped open for Darlington Mowden Park in terms of the race for promotion. Danny Brown’s men had picked up back to back wins against Esher and Plymouth Albion, but a poor first-half performance against Ampthill in Round 12 means they have dropped back from the leading pack once again.

DMP are 10 points behind Blackheath as things stand and because this league is so tight, they will be aware that a run of positive results between now and Christmas could move them back into contention. However, Cambridge will be out to hamper Darlington’s progress in Round 13 and the Blood and Sand are more than capable of doing just that. Richie Williams’ men have beaten Ampthill and Rotherham this term and they were close to upsetting Old Elthamians last Saturday, but narrowly lost at Volac Park. Just four points separate DMP and Cambridge so can the visitors leapfrog their hosts this weekend?

An explosive start to the second-half against Chinnor gave Sale FC hope of clinching a superb win over one of the promotion candidates in Round 12, but the victory ultimately eluded Jonathan Keep’s side as they fell to their fourth defeat in five matches.

The men from Heywood Road do sit six points clear of the danger zone and a win over Esher this weekend could put some clear daylight between themselves and the relegation places. The visitors to Manchester on Saturday do occupy a place in the bottom three as things stand, following a defeat to rivals Birmingham Moseley last weekend. The Surrey-based side are also just two points from safety so a second away win in a row might see Esher move out of trouble, but it could be tough against a Sale outfit who have won four of their five games at home this term.

“Not good enough.” That is how Plymouth Albion head coach Kieran Hallett described his side’s performance against Rosslyn Park last week. The men from Brickfields had led at half-time, but Park came back to condemn Albion to a fourth straight loss, which is Plymouth’s worst run of form since they were relegated from the Championship in 2015.

Last season’s bronze medallists do have a long list of injuries, but they currently sit just one point clear of the bottom three and in those aforementioned relegation spots are Albion’s opponents this weekend; Birmingham Moseley. The Midlands club gave themselves a huge boost in Round 12 as they defeated rivals Esher to move to the cusp of the safety positions in National One. The men from Billesley Common will now be hoping their third win of the season is not a flash in the pan as they look to move out of trouble in the final few weeks before Christmas.