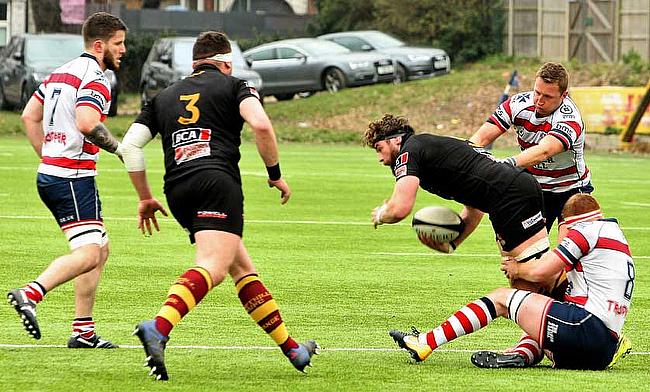 The National Leagues enter Round 27 and there are two huge clashes at the summit of both National One and National Two North this weekend. (Photo Credit: David Whittam)

Added to this, a maximum of four teams could be relegated on Saturday afternoon so we have highlighted some of the key games to keep an eye on from all three leagues.

Arguably the standout fixture across the course of the weekend comes in National One as league leaders Ampthill and District host title chasing Rosslyn Park. The A’s come into this clash five points clear after overcoming a tricky hurdle in Round 26. Mark Lavery and Paul Turner’s side defeated Darlington Mowden Park at the Northern Echo Arena to stretch their winning streak to nine matches and if they can get past Rosslyn Park on Saturday, the Championship may well be within touching distance.

In terms of Rosslyn Park, head coach Kieran Power stated ‘a win is a win’ after their recent victory over Plymouth Albion and grinding out results is priceless when you’re in a promotion race. Park fought hard against Albion to secure their seventh triumph in a row and it leaves them six points off the summit with four games remaining in the season. In truth, Rosslyn Park really need to win this huge clash with Ampthill if they are to stay in the title picture and if they can become only the second side to be victorious at Dillingham Park this term, this promotion battle could go right down to the wire.

Watching with interest will be Old Elthamians, who currently occupy second spot in the table. Gavin Lach’s side remain five points behind Ampthill following a comfortable win over Cambridge last time out and their victory was the perfect response to their defeat against the A’s in Round 25.

Did you enjoy the game on Saturday?

With four matches remaining, OEs are firmly in the title conversation and they will be strong favourites for their upcoming clash with Caldy on Saturday. The Wirral outfit sit one point from safety as things stand and that is mainly due to the torrid run of form which they have endured. Caldy have won just one of their last 12 matches and with Darlington Mowden Park and Rosslyn Park to come before the end of the season, the men from Paton Field will be keen for some home success on Saturday as they look to dig themselves out of the bottom three.

Sitting in the relegation places alongside Caldy are Esher and Loughborough Students. The former are currently at the foot of the table and eight points from safety, but they can boost their survival chances when they entertain Sale FC in Round 27. Esher suffered a setback against Birmingham Moseley last week while Loughborough also tasted defeat at home to Blackheath. The Students are one point better off than Esher, but the Midlands club do face a tricky test when they visit Chinnor on Saturday. Can either Esher or Loughborough pick up a valuable win to conclude March?

Elsewhere in National One, Cambridge will be keen to create some breathing space between themselves and the drop zone when they take on Darlington Mowden Park. Richie Williams’ side are just one point above the trapdoor following a run of three straight defeats so they will be eager to halt their dip in form against sixth place DMP on Saturday.

While drama is expected at the top of National One, it wouldn’t be a surprise to see fireworks at the summit of National Two North as Chester and Huddersfield do battle at Hare Lane. In terms of Chester, they took a major step towards securing a top two finish last weekend as they outclassed rivals Fylde in Lancashire. Jan van Deventer’s side, who sit second in the table, are now six points clear of the chasing pack and if they can overcome this test against Huddersfield, they would further enhance their promotion hopes.

Chester have lost just once at home all season so this won’t be an easy task for Huddersfield, however, the third-placed side come into this fixture on the back off a sensational result in Round 26. Gareth Lewis’ men thrashed South Leicester 91-24 and the Yorkshire club are still in the hunt for a top two spot with four games remaining. Field did lose 21-15 to the Cheshire outfit back in December so can they gain their revenge on Saturday to strengthen their promotion ambitions?

Keeping an eye on that fixture will be league leaders Hull Ionians. The I’s had to battle back from 17-0 down to clinch a victory against Otley last week and it means Martyn Wood’s side are still one point clear at the top. Arguably, Hull have now completed their ‘toughest’ remaining fixtures but they will be wary of their next opponent, Preston Grasshoppers, who travel to Brantingham Park having won their last six matches. 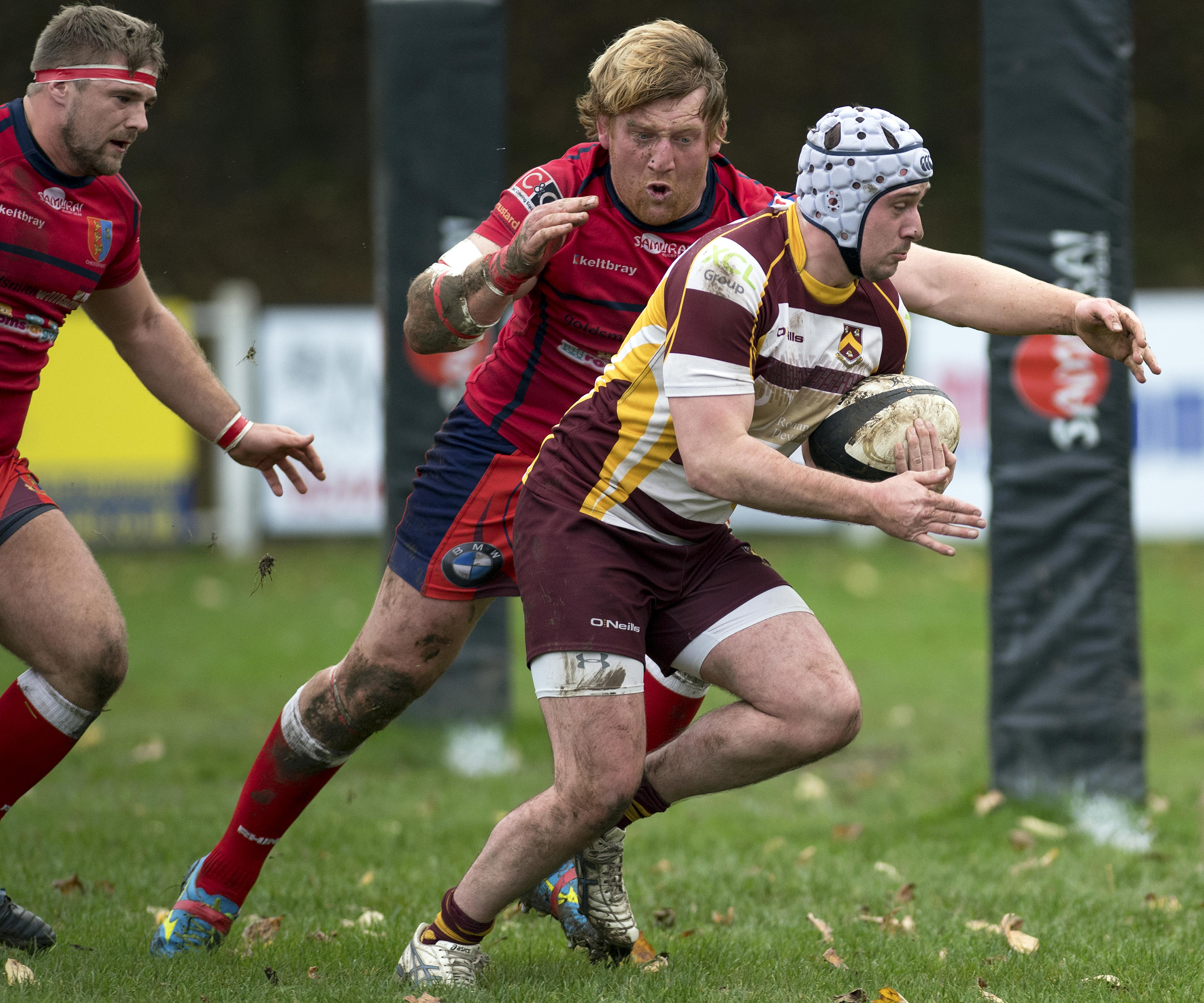 Down at the bottom of the division, time could be up for South Leicester and Macclesfield this weekend. Both sides currently sit 15 points from safety with four games to go and their fate may well be sealed on Saturday afternoon. After successive fixtures against the current top four, South’s run of difficult matches continues in Round 27 when they host an in-form Sedgley Park outfit while Macc travel to Hinckley.

Both teams must match or better the result of Sheffield Tigers to avoid the drop in Round 27 as the Yorkshire club are the side which sit directly above the relegation zone. In turn, the Tigers can guarantee their place in National Two North for next season if they obtain a better result than South or Macc when they visit Tynedale on Saturday.

As they have been for a substantial portion of the National Two South season, all eyes will be on Rams RFC in Round 27 as they can confirm a top two finish when they welcome sixth-place Redruth. Last time out, the Berkshire club produced a superb display against Worthing Raiders to secure their 24th win of the season as the Rams took another step towards promotion to National One.

Just two points from their trip to Redruth would guarantee Seb Reynolds’ side a minimum of  a second-place finish, but their main objective will be claiming a win in Cornwall as they edge closer to the league title.

Of course, there is the possibility of the Rams being crowned champions on Saturday, but that would require second-placed Canterbury falling to a defeat in Round 27.

Speaking of London Irish Wild Geese, they are one of the sides who currently sit in the relegation zone. After last week’s setback against Guernsey, the men from Hazelwood are now 16 points from safety with four games to go. 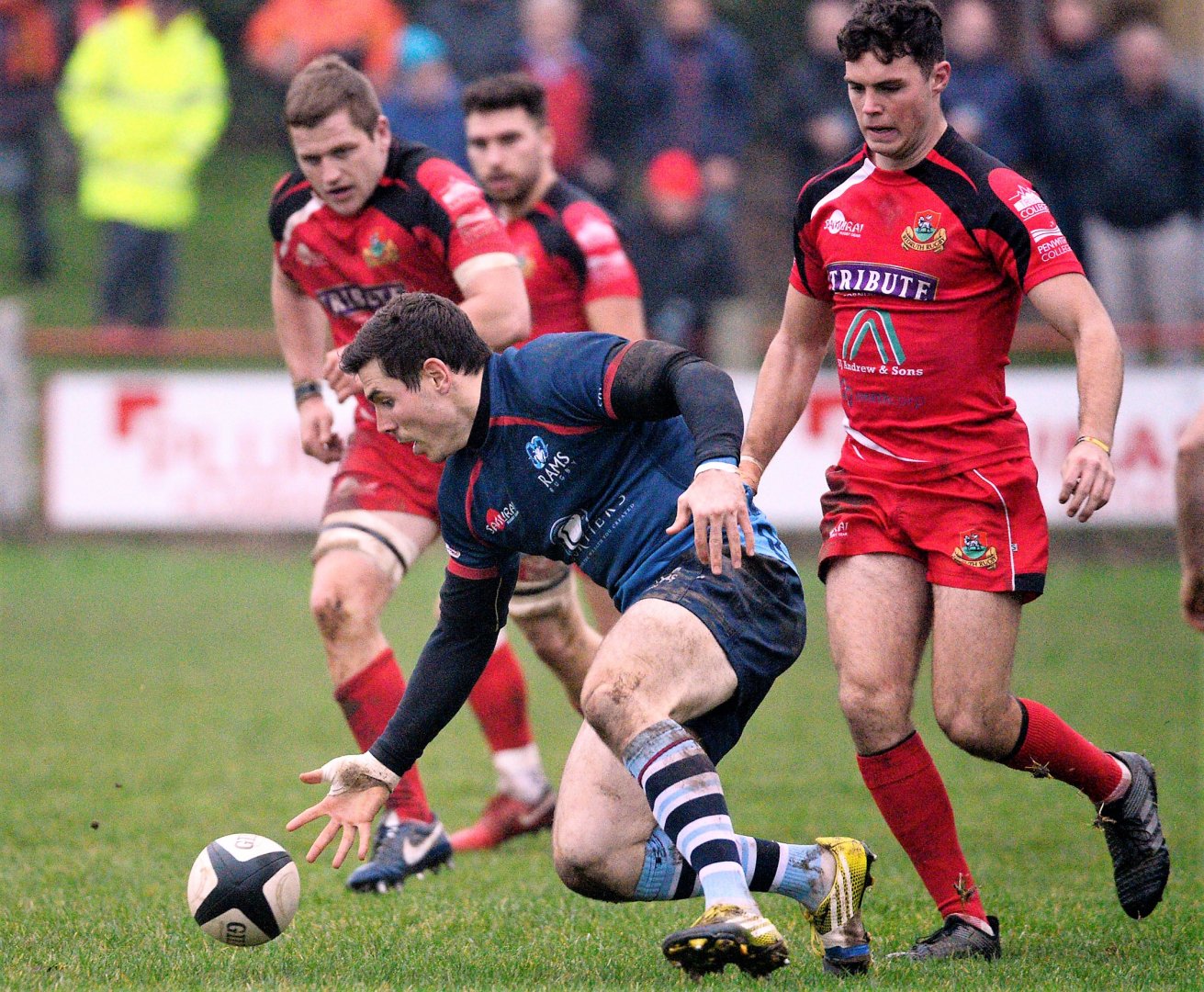 Eddie Fraher’s side must better Old Redcliffians’ result against Taunton Titans to stand any chance of avoiding the drop this weekend as the Bristol club occupy the spot above the trapdoor.

The aforementioned Guernsey are also in the bottom three alongside the Wild Geese and last Saturday’s victory has kept their glimmer of hope alight, when it comes to survival. Jordan Reynolds’ men must match or better the result of Old Reds when they host Dings Crusaders otherwise their one-year stay at this level will be over.

The final side in the relegation places are Birmingham and Solihull, but their fate cannot be sealed this weekend. The Bees are still fighting and just one defeat from their last four games means Pete Glackin’s men are six points shy of safety. The Midlands club also had a five-point deduction at the start of the campaign so if they were to pull off an escape, it would be a remarkable effort. They will be hoping their revival continues when visit Bury St Edmunds in Round 27.