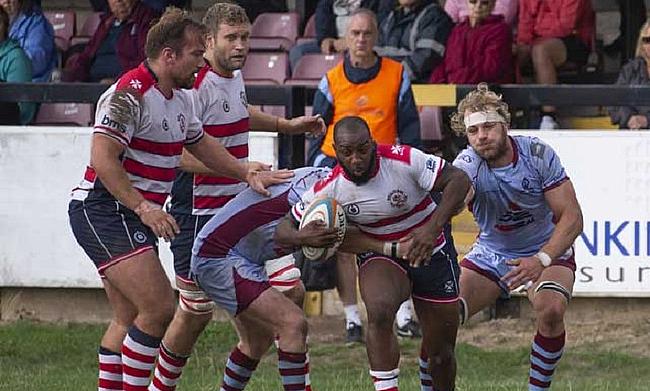 Rosslyn Park and Rotherham Titans will be keen to maintain their respective title challenges when the sides meet in National One on Saturday.

Both teams have won five games on the spin so they enter 2019 with confidence behind them and with the promotion race being as tight as it is, neither Park (3rd) or Rotherham (5th) will want to drop points this weekend.

Currently leading the pack are Old Elthamians and after suffering their first home defeat of the season against local rivals Blackheath just before Christmas, they will be hoping to bounce back when they visit Darlington Mowden Park in Round 17.

The aforementioned Blackheath are just one point behind OEs after their derby day victory and they can continue to crank up the pressure on their near neighbours when they host Plymouth Albion while fellow promotion candidates Ampthill and District go to Esher.

There is also a potentially significant game at the wrong end of the National One table this weekend as Birmingham Moseley and Bishop’s Stortford clash in the Midlands. Both sides are currently in the bottom three alongside Loughborough Students, who host Caldy.

Two other teams that are hovering above the relegation places – Cambridge and Sale FC – will be aiming to begin the New Year in a positive fashion when they take on Chinnor and Cinderford, respectively.

What a year 2018 was for Old Elthamians. They rounded off their debut season in National One by finishing in sixth place and now they begin 2019 at the top of the third tier of English rugby. We mention it a lot in our previews, but OEs continue to write new chapters in their recent history and with 14 games to go in this term, who knows what lies ahead for Gavin Lach’s men.

As things stand, they sit one point clear at the summit after losing to title rivals and near neighbours Blackheath just before Christmas and they start the New Year with a trip to Darlington Mowden Park. The North-East outfit currently occupy 10th place in the league after a very difficult first half of the season. Danny Brown’s men have struggled for any positive consistency and they come into this fixture having picked up just one win from their last five games. Can DMP begin 2019 by toppling the league leaders?

Blackheath certainly would have enjoyed their Christmas break. They clocked off for the year with a narrow 12-11 win over Old Elthamians and James Shanahan’s side blew the title race wide open once again. ‘Club’ have been excellent all season and they remain firmly in the promotion battle as they begin 2019 by hosting Plymouth Albion at Well Hall.

The hosts are just one point off top spot while Plymouth arrive in London hoping the conclusion of 2018 was a sign of things to come. Kieran Hallett’s men endured a tough couple of months at the start of the season, but three straight wins in December has lifted them away from the relegation zone and up to ninth place. The bottom half of this table is becoming as tight as the title race with Albion only six points clear of the trapdoor, but a fourth consecutive victory against a promotion candidate would only continue the positive feeling around Brickfields.

Blackheath’s triumph just before Christmas may well have put a smile on the faces of their fellow promotion candidates. It kept the title race very much alive so the result must have pleased both Rosslyn Park and Rotherham Titans, who clash on the opening weekend of 2019. Third-placed Park are level on points with Blackheath after Kieran Power’s side picked up their fifth win in a row against Bishop’s Stortford and there is a real sense around the Rock that Park are getting back to their best.

However, their charge towards top spot could be halted by rivals Rotherham Titans. The Yorkshire outfit travel to the capital having also won five games on the spin and Joe Barker’s men are still harbouring hopes of an immediate return to the Championship. The Titans sit in fifth place as things stand, but they are only four points behind leaders Old Elthamians. If you think January always gets off to a sluggish start, then think again. This should be a cracker in Round 17.

Yet again, Ampthill and District are at the right end of the division in National One, but since gaining promotion in 2015, I think this is the closest the A’s have been to challenging for top spot. The men from Dillingham Park have gone about their business very nicely and just one defeat in their last nine games means Ampthill are only two points off the summit.

The fourth-placed side have not lost since the middle of October so this will be a tough challenge for Esher in Round 17. The Surrey-based club are balanced precariously above the bottom three and they are only outside the drop zone because they have won one more game than rivals Birmingham Moseley. Ricky Nebbett’s men have secured three victories from their last six matches, with their most recent triumph coming at Molesey Road at the beginning of December, so they will be hoping to kick-off January in a similar fashion.

It has been quite the 12 months for Chinnor. Promotion to National One was secured last May as Matt Williams’ side created club history and as one year ends and another begins, the Black and Whites are continuing to head in the right direction. The Oxfordshire outfit are currently occupying sixth place in their maiden season at this level and they will be hoping 2019 can be as fruitful as 2018.

However, what may have slightly dampened their Christmas spirits was the way Chinnor ended the first half of the campaign. Just one win from their last four games has seen them fade into the background of the promotion picture, but they are only nine points off Old Elthamians. A title race might not even be in their thoughts, but they will be keen to return to winning ways when Cambridge visit Kingsey Road this weekend. Richie Williams’ side are currently 11th and are five points clear of the drop zone, but it is their performances on the road which have caught the eye this term. The Blood and Sand have beaten Ampthill, Rotherham and Darlington Mowden Park away from home so they will be keen for another triumph on their travels.

If you scan down the National One table, you will notice Caldy are sitting in seventh place. After finishing the last campaign in 11th, Simon Verbickas’ side might well be satisfied with their performance after 16 games of this term, but the way they concluded 2018 would have concerned the Wirral outfit. Just two wins from their final eight games of the year halted their early season momentum and after losing to Sale FC just before Christmas, they will be eager to get back to winning ways on Saturday.

The men from Paton Field travel to bottom of the table Loughborough Students, but it is a recoverable situation for the Midlands club. The Students are currently seven points from safety and it is their healthy amount of bonus points that has enabled them to keep in touch with their rivals. Alan Buzza’s side have picked up 13 extra points, but now it is about turning those near misses into victories as Loughborough have won just one of their last five games. A home triumph in Round 17 would be the ideal start to what will be a very strenuous four months for the Students.

Christmas may have felt like it had come three days early for Cinderford. In their final match of 2018, Paul Morris’ side produced an excellent display as they completed the double over Birmingham Moseley and it meant the Foresters ended a successful year in the top half of National One. Their victory at Dockham Road also halted a four-match losing streak so the Gloucestershire outfit will be hoping to add to their latest win when they travel to Sale FC this weekend.

Both Cinderford and Sale gained promotion into this division back in April and the hosts on Saturday will be hoping their stay in National One is not short lived. Jonathan Keep’s side are competing at this level for the first ever time and as things stand, they sit four points clear of the bottom three. Having said that, their picked up a superb away win over Caldy just before Christmas and back at the CorpAcq Stadium, they will be keen to dispel the January blues for their supporters this weekend.

Two sides that endured a tough first half of the campaign collide at Billesley Common this weekend as Birmingham Moseley host Bishop’s Stortford. Both teams are currently in the bottom three as they prepare for this clash, but the hosts are only in the drop zone because they have won less games than rivals Esher. Richard Protherough’s side were on a roll of three wins from four matches prior to their final fixture of 2018 against Cinderford, but they couldn’t maintain their momentum just before Christmas.

After the festive break, the Midlands club will now be itching for a response but Bishop’s Stortford are out to pick up a crucial result in their fight for survival. Andy Long’s men are six points from safety so their only target will be a victory against Birmingham Moseley this Saturday. Stortford have lost their last four matches and another defeat in Round 17 could set some alarm bells off for the Hertfordshire outfit.