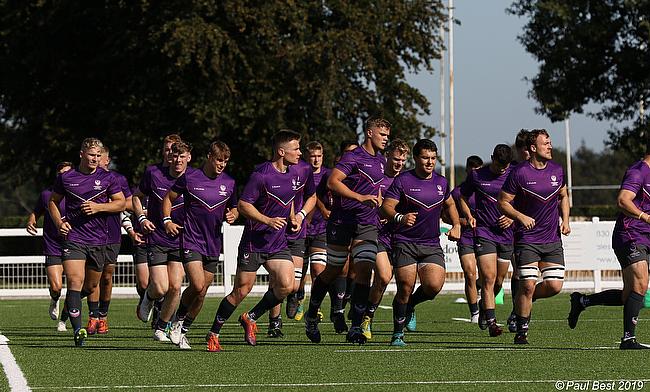 It has been a week where we have seen the Rugby World Cup come to an end, but never fear, the National Leagues are on hand once again to provide you with your rugby fix. (Photo Credit: Paul Best)

We have reached the conclusion of the first third of the campaign and in National One, Richmond couldn’t have asked for much more. The side relegated from the Championship last season are currently four points clear and face bottom of the table Canterbury on Saturday.

Meanwhile in the division, second-placed Rosslyn Park take on Chinnor in arguably the most intriguing game of the weekend.

National Two North may have something to say about that, though, as league leaders Fylde host an in-form Loughborough Students with the Midlands club out to hinder promotion hopes for the second week running.

And last but not least in National Two South, Henley Hawks occupy the silver medal position as things stand and they will be keen to stay on the coattails of table toppers Tonbridge Juddians when they face Clifton at Dry Leas.

Below is a more in-depth look at Round 10 across the National Leagues.

Richmond displayed their title winning credentials last weekend. With the clock ticking down against Old Elthamians, the London-based club knew an eighth win of the season was theirs but they didn’t settle for an ordinary victory at the Athletic Ground. On his 100th appearance for Richmond, Cam Mitchell darted over to clinch a late bonus-point for Steve Hill’s side to leave them four points clear at the summit of National One. Their efforts were rewarded as second-placed Rosslyn Park failed to follow suit during their win over Darlington Mowden Park and Richmond will now be heavy favourites to maintain their advantage in Round 10.

It is top against bottom on Saturday as the league leaders travel to Canterbury, who are still searching for their first victory. Andy Pratt’s charges have lost all nine of their fixtures in their maiden season at this level and with one-third of the campaign almost up, the City Men are already 16 points adrift of safety. However, recent positive spells against Chinnor, Darlington Mowden Park and Birmingham Moseley would have encouraged Canterbury and they will have to be at their very best if they are to cause an almighty upset.

Rosslyn Park are once again right in the thick of a title race in National One and they will be hoping to keep pace with Richmond when they host Chinnor this weekend. Kieran Power’s side will be hungry to stay on the coattails of the table toppers and despite missing out on a bonus-point last Saturday, a hard-fought win away at Darlington Mowden Park was more than satisfying.

??? “The boys came up with the right attitude to get the win.”

For Chinnor, they also had to battle last time out. Matt Williams’ side had lost back-to-back fixtures to conclude October, but began this month by beating Canterbury 28-20. The Black and Whites are seventh in the table, but they are only six points behind second-placed Park so a victory at the Rock could perhaps act as catalyst for Chinnor’s season.

Blackheath are on a run of three successive wins in National One with their latest victory coming against Bishop’s Stortford at Well Hall. James Shanahan’s side are only three points behind Rosslyn Park whilst leaders Richmond are just about in their eye sight as they prepare to visit Cambridge on Saturday.

A trip to Volac Park will test ‘Club’, though. Rosslyn Park lost in Cambridge earlier this term, but that remains the Blood and Sand’s only home victory of the campaign. Their second win on their own patch could and maybe should have come last weekend as they led Plymouth Albion 20-0 during the first-half, but in the end, Richie Williams’ side had to settle for a draw. They are currently just two points above the relegation places so doubling their tally of home triumphs will mean a lot to Cambridge in more ways than one.

Elsewhere in National One this weekend fourth-placed Rams visit a Rotherham Titans side who, as things stand, occupy a spot in the bottom three whilst Birmingham Moseley go to Plymouth Albion and Darlington Mowden Park travel to Sale FC.

Fylde may have been beaten by promotion rivals Caldy to begin November, but Warren Spragg’s side were able to remain on top of the division heading into Round 10. Their ‘never say die’ attitude earnt Fylde a point at Paton Field last weekend and that was enough to keep the men from Woodlands at the summit of National Two North.

Granted, Caldy do have a game in hand to come but Fylde will just be focused on themselves, especially when they host Loughborough Students this weekend. The Students dented Sedgley Park’s own top two aspirations last time out and the Midlands club have the tools to damage Fylde’s hopes as well. Rhys Edwards’ side may well be seventh in the table, but four wins from their last five matches certainly makes them a dangerous opponent for the table toppers.

In terms of Caldy, they visit Scunthorpe but rather than the title race or the fight against relegation taking centre stage, it quite rightly will be an afternoon for remembrance at Heslam Park.

Following the tragic death of @ScunthorpeRUFC player James Walker, who sadly took his own life, the 1st XV is hoping to raise £50,000 for a local mental health charity. Please #donate on @justgiving and RT https://t.co/m66JE5NTXB

This week, Scunthorpe announced the tragic news that 1st XV player James Walker had sadly passed away after taking his own life.

As a mark of respect, Scunthorpe’s clash with Chester was postponed in Round Nine and this Saturday, the Greens will be determinded to put in a positive display for their much-loved teammate. Tim Robinson’s men are currently 10 points from safety with a game in hand, but the Lincolnshire outfit have shown signs that a first win of the campaign isn’t too far away.

As for Caldy, they come into this fixture having beaten Fylde, but frustratingly for Gareth Davies’ side, they remain a point behind the league leaders. However, a ninth straight victory of the campaign for the Wirral outfit will most certainly keep the pressure on.

Sheffield Tigers arrive into Round 10 searching for a fifth consecutive win as Jamie Broadley’s side look to build on a brilliant start to the season. The Tigers currently sit third in the table, seven points off the top two, but they will just be revelling in their purple patch of form.

The Yorkshire outfit have been mightily impressive, but they face a difficult proposition this weekened when they take on Tynedale. Ben Woods’ men are also on a four-match unbeaten run and Tyne sit only one point behind the Tigers ahead of this contest. Both clubs will be aiming to maintain their positive sequences of results, but who will come out on top at Corbridge?

Elsewhere in National Two North this weekend, Sedgley Park will be aiming to bounce back against struggling Luctonians, Stourbridge travel to Huddersfield and Otley host Hull whilst Hinckley go to Wharfedale and Chester take on Preston Grasshoppers.

Tonbridge Juddians welcome Westcliff to the Slade in Round 10 after moving back to the top of National Two South. Last Saturday, Peter Dankert’s side ground out a victory away at Old Albanian to return to the summit whilst promotion rivals Taunton Titans slipped up at Esher. TJs are now two points clear and the odds will be in their favour to remain in pole position following the conclusion of this weekend.

Fifteenth-placed Westcliff make the trip to Kent in search of only their second victory of the season, but the last three weeks for Peter Mahoney and Jacob Ford’s men have been positive. October yielded their first ever win at this level and encouraging performances against promotion candidates Henley Hawks and Taunton Titans suggests Westcliff are capable of causing TJs one or two problems on Saturday.

Second-placed Henley Hawks will be hoping Westcliff can disrupt Tonbridge Juddians as Nigel Dudding’s side aim to maintain their stay in the top two. An unbeaten run of five games has allowed the Hawks to battle their way back into the promotion places and now Henley are only two points off the summit heading into Round 10.

“We are in a really strong position. It is testament to the resilience we have built as a squad.”

Henley Hawks’ Tom Emery chatted to us ahead of their Round 10 clash with Clifton in #Nat2s.

They are actually only occupying second place by virtue of ‘Games Drawn’ and ‘Points Difference’ as things stand and this weekend, they welcome Clifton to Dry Leas. Two weeks ago, the Lavender and Blacks had the opportunity to move into first place in the division but back-to-back defeats has seen Matt Salter’s side drop to fifth in the table. Clifton’s home loss to Worthing Raiders would have massively frustrated them last time out, but a victory on Saturday would relight their top two ambitions.

Taunton Titans were unable to hold on to top spot against Esher last week as in dreadful weather conditions, they slipped to third in the table. However, their narrow loss in Surrey won’t have dampened spirits too much as Tony Yapp’s side sit level on points with Henley Hawks and just two points behind league leaders Tonbridge Juddians.

The Somerset outfit take on Barnes this weekend, and the visitors will arrive at The Towergate Stadium in a buoyant mood. The London-based club ended a five-game winless run in Round Nine as they secured a potentially vital victory over rivals Bournemouth to move out of the drop zone. Barnes are now three points clear of the trapdoor and almost exactly a year ago, they defeated Taunton 51-38. Can history repeat itself?