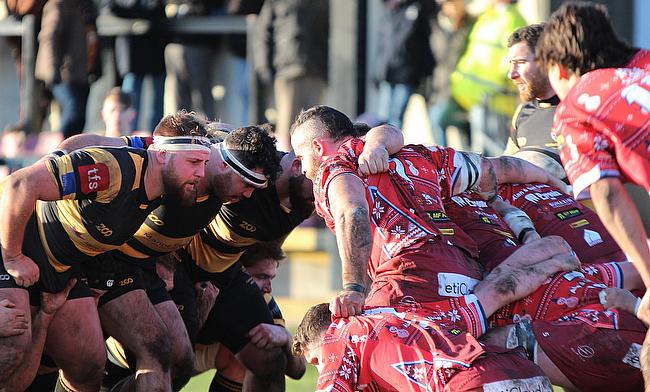 Rotherham Titans have sparked their survival hopes back into life following a last-gasp win over rivals Canterbury in Round 15. Photo Credit: (Phillipa Hilton)

The Titans had seen a 10-point advantage disappear, but a late penalty from Morgan Bunting ended their seven-match winless run.

The Yorkshire outfit still have work to do if they are to dig themselves out of trouble whilst things are already starting to look bleak for Hull Ionians after they were swept aside by an excellent Cambridge outfit.

At the top, Richmond and Rosslyn Park swapped places once again as the former secured a bonus-point victory over Birmingham Moseley whilst Park narrowly edged past Cinderford.

Richmond maintained their title challenge in National One with an excellent bonus-point win over Birmingham Moseley.

Jeremey Cunnew latched on to Louis Molloy’s pass to score the first of Richmond’s five tries, while Tom Pashley crossed after both sides had exchange penalties.

Take a read of the full match report from yesterday's impressive 39-10 win over @MoseleyRugbyFC.

Tom Hodgson landed his second three-pointer just before the break for the hosts and Richmond tightened their grip on proceedings when Dan Kelly dotted down.

Toby Saysell charged over for the bonus-point score, but Moseley did have something to smile about when Jacques Le Roux sniped over.

However, Richmond had the final say as Morgan Ward touched down to round off an excellent display by Steve Hill’s men.

Rosslyn Park were unable to secure a bonus-point to keep them at the summit of National One, but Kieran Power’s side did clinch a narrow win away at Cinderford.

The only try of the game came in the second period when Park No.8 Hugo Ellis went over from a driving maul.

James Butler kicked a penalty to initally give Cinderford the lead, but Craig Holland responded from the tee before the break.

Cinderford failed to really trouble Park after Ellis’ try and the visitors saw out the victory which leaves them one point off the top.

Tries from Connor Hayhow, Jamie Guttridge (2) and Kieran Leicester gave Rams a 22-7 lead at half-time and the home side continued their dominance after the break.

Connor Stapley, Stevie Bryant and a Tom Vooght brace completed the rout for Seb Reynolds’ side whilst Plymouth’s scores came via Jamie Salter and George Mills.

Chinnor strengthened their own title bid by beating Darlington Mowden Park in a compelling battle at Kingsey Road.

The scores from Southworth and Goss proved to be decisive in the final 12 minutes after Darlington had led 27-25 following efforts via Josh Hodge, Rob Farrar (2) and Ollie Walker.

The result keeps Chinnor five points off the top whilst DMP have slipped down to seventh spot.

Old Elthamians held off a spirited Blackheath fightback to edge a hard-fought contest against their local rivals.

Ollie Claxon, on his 100th appearance for the club, opened the scoring for OEs and tries from Alex Goble and Mike Kovacic gave the away side a 24-13 half-time lead.

Club’s Jake Lloyd had gone over in the first period, but the hosts fell further behind on 54 minutes as Harry Ledger touched down.

However, Blackheath started to take control of the game and a penalty try just after the hour set the platform for a possible fightback.

Ben Ransom took advantage of the extra man and whilst the home side put all their efforts into snatching the victory, OEs held on to secure back-to-back wins.

Andy Long’s men have now won their last four matches on their own patch, which has steered them away from any relegation tussle.

Sam Winter, Josh Stannard and Chris Smith all crossed to give Stortford a 19-7 lead and the latter went over for his second to keep the home side in control.

Sale did threaten to pull off a comeback with two further tries and with James Apperley also in the sin-bin, the visitors had the momentum with them.

However, Stortford were able to navigate the closing stages to clinch another victory in front of their own supporters.

Hull Ionians’ bid for survival in National One received a setback in Round 15 as Cambridge eased to a victory at Brantingham Park.

Tries from Andy Henderson, Matt Hema (2) and Lawrence Rayner put the Blood and Sand 27-10 up at half-time, with Ben Stephenson going over for the I’s.

Rayner again, Henderson, Rhodri Adamson, James Martin (2) and Joe Tarrant added further scores to round off a clinical display from the visitors.

Victory for Richie Williams’ side means they are 13 points clear of the bottom three whilst Hull Ionians are now 19 adrift of safety.

Tries from Sam Allan and Anthony Maka gave Rotherham their first-half advantage and the latter seemingly put the home side in command when he dotted down again five minutes after the restart.

But Dan Smart’s converted try and a second for Alex Thompson gave the City Men a 19-17 lead following a storming fightback.

However, there was to be one final twist as Morgan Bunting’s penalty deep into stoppage time secured a welcome win for Rotherham, who are now eight points from safety.