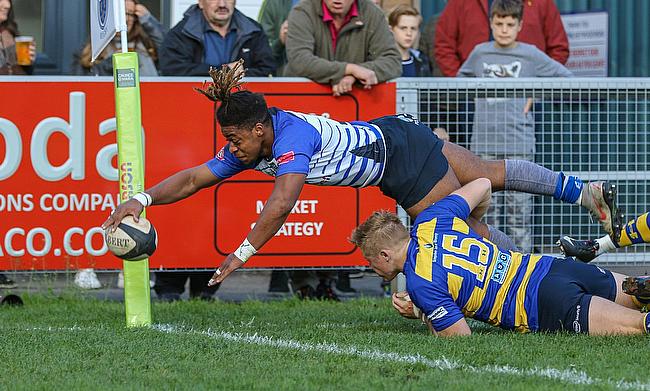 Will Sherrington chats to Sale FC Director of Rugby Jonathan Keep about the development of Paolo Odogwu, who is currently in England’s Six Nations camp. (Photo Credit: Gareth Lyons)

Eddie Jones’ squad for England’s Six Nations clash with Italy does contain a few changes from the team that were outclassed by Scotland, but Sale FC are still waiting to see one of their former players light up the international stage.

Paolo Odogwu won’t be involved at Twickenham this weekend and in fact, the Wasps centre/winger was eligible to play for Italy before committing his international career to England.

The former Sale Shark and Leicester Tiger has been playing some of the best rugby of his young career and one person who has followed Odogwu’s journey is Sale FC’s Director of Rugby Jonathan Keep.

The National One side first took Odogwu on loan from neighbours Sale Sharks for the 2016-2017 season, and Keep is confident his former player, when given the chance, will have the mental strength to succeed on the international stage.

Keep said: “Paolo’s got a pretty cool head on his shoulders and he’ll be used to the pressure. I’m sure that pressure comes with most games he plays in the Premiership, but obviously it’s another step up to play in international rugby.

Two years ago I photographed Paolo Odogwu playing for @SaleFC against @BSRUGBY. Today he was named in @EnglandRugby's #SixNations squad.

Shows the value of the National leagues in player development, such a shame there has been no @national1_rugby played since March. pic.twitter.com/PajisDofov

“I’m sure he will take it all in his stride. Just knowing the sort of character that he was, he’ll certainly rise to the challenge and will look to take anyone on like he always has done.”

Odogwu scored an impressive 100 points in 24 games during his time on loan at Sale FC and was identified from a young age as an exciting talent.

The Sale FC boss spoke of Odogwu’s quality: “There was never really a game where he didn’t do something spectacular. He was professional throughout his time at Sale, and his pace and power were the main things that stood out to me.

“There was a game at Rosslyn Park away a couple of seasons ago where we needed a try in the last few minutes. He basically broke out of our 22 and went pretty much the full length to score to get us the two bonus-points which was our target!

“We wish Paolo the best of luck from Sale FC. He was influential for us, and we hope he can go on and do the same at international level!”

Fondly reflecting on Odogwu’s time on loan, Keep underlined that his development was underpinned by his impressive work ethic and willingness to help his teammates.

Keep said: “I first saw him play against Toulon in Europe and then his first game for Sale FC was up at Scunthorpe away! He was never shy of getting his hands dirty and getting stuck in. That, for me, is a big part of being a part of any team.

“It doesn’t matter who you are or what your aspirations are. If you play in a team, you put one hundred per cent in every game you play, and that’s certainly what Paolo did.

“Paolo helped some of the other lads in the squad by sharing his experiences and passing on his knowledge. He was a very good fit for the squad and for what we were aiming to achieve.”

After his contract ran out at Sale Sharks, Odogwu joined Wasps where he is currently flourishing after receiving his first man of the match award for the side in their 52-44 victory over Bath in January.

Keep admitted that although he was sad to see the talented back leave Sale, he is proud to have worked with him.

“Personally, I wouldn’t say I was disappointed to see Paolo leave Sale Sharks. The tough decision for Sale Sharks was that there were already two or three international wingers in the squad at the time. I’m sure that came into the decision making.

“For me, personally, I would rather have had him around than not, but I saw it as a good opportunity for Paolo and I’m proud that he has been part of Sale FC, and proud that we have been part of his development too.”

The Sale Sharks Academy has a history of developing young talent who progress to international level, with Cameron Redpath coming through the ranks to impress at the weekend for Scotland.

The ‘Gold Standard’ Academy model promises to continue this development with Keep tipping a few unnamed prospects to burst on to the scene.

Keep said: “There are quite a few younger lads at the moment that are in development. Cam Redpath was one which from a young age, you could see that he was going to be an international player.

“I wouldn’t want to single anyone else out currently to be honest with you, but I think that there are definitely a few players that you could be seeing in the near future.”

And over the coming weeks, let’s hope Keep and the rest of us get to see Odogwu show his evident qualities on the international stage.