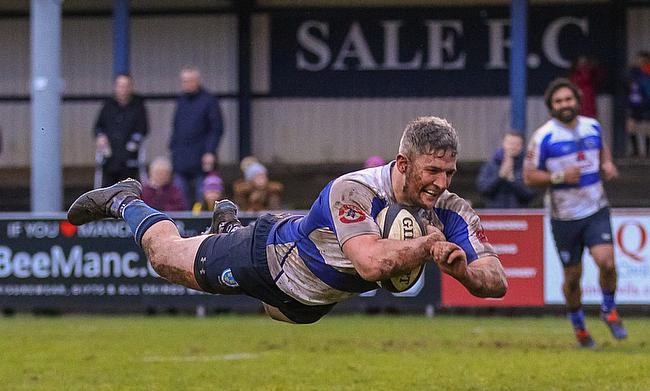 With Manu Tuilagi’s move to Sale Sharks from Leicester Tigers making all of the headlines, ncarugby.com spoke to a man who has represented both sides. Photo credit: Gareth Lyons

Having spent eight seasons with Sale Sharks, Tom Brady played for two years in the red, green and white of Leicester.

Spending a lot of time with Tuilagi on the sidelines, whilst both of the backs recovered from long-term injuries, Brady was surprised to see the Samoan-born centre leave Welford Road.

“I think they (Leicester Tigers) have lost a bit of that culture that really does attract and keep players,” Brady said. “If you look at the top teams, they have got a good group of local talent and international talent that will stick around for a long time and Leicester have lost their way a bit.

“It’s sad to see and it is probably the reason why the talent like Telusa Veianu, Manu Tuilagi aren’t completely drawn in. Pay cuts or not, you should want to play for that club and obviously there are reasons that I’m sure you could find from them, reasons they aren’t as attracted to the club anymore.”

Tuilagi was one of a handful of Tigers players that were unable to agree terms with Leicester over proposed new contracts. Club regulars Greg Bateman, Kyle Eastmond and Adam Thompstone were also let go as part of a mass exodus, leaving many with questions about the goings on behind the scenes at Leicester.

NEW SIGNING ?? | Sale Sharks are delighted to welcome @manutuilagi to the #SharksFamily! ??

However, Leicester’s loss has become Sale’s gain. Within a week, the star centre joined Steve Diamond’s squad as they look to push for their first Premiership title since the victory in 2006 with Philippe Saint-Andre at the helm and Brady believes that this is just another example of Diamond’s excellent recruiting.

“He is the type of guy that Steve Diamond does recruit,” Brady said. “His recruitment is always spot on. He gets great players, but also attracts real good personalities. He finds good people for his teams and that is what Manu is. He is a really nice lad, very grounded, very down to earth. I think he has put his injury worries behind him and I am quite excited to see him wearing blue.

“It really is a testament to what Dimes, Jed Mason and Simon Orange are creating. They have just got a brand-new facility, a squad that is a top four, top two team. They are an attractive club with world class talent. So, all in all, I am not massively surprised they have got one of the best centres in the world.”

What remains to be seen is who Tuilagi will be lining up with in the Sale midfield. It is a mouth-watering prospect. Even to see the mercurial Faf de Klerk fizzing a flat ball to the England international will be a sight to behold.

[mpu-1] Brady isn’t one to listen to the thoughts of others, though, believing that it will take more than the arrival of Tuilagi to displace Sam James from the team. Rohan Janse van Rensburg and Tuilagi is the 12 and 13 axis of choice for many, but with James’ consistent form for the side, you can imagine that Sale fans would like to see the local player retain his starting slot.

Since retiring from professional rugby, Brady has been turning out for Sale FC in National One as he transitions to full-time work. Now working for Butlers Farmhouse Cheeses, he is pleased to say that he is on the right path having struggled early on with his move to everyday working life.

“I think there are similarities to being in a team,” Brady said. “At the start, I struggled a bit. Actually, I didn’t enjoy it all. I spent seven or so months not having that identity of being ‘the rugby player’, but since I have been working for Butlers, I feel part of a team again.

“It’s having that collective goal again. I am producing something, making something and it feels right, It is a nice environment and I am in a good place with these guys. I am so grateful for the opportunities that they have given to me.”

Butlers Farmhouse Cheeses are based just outside Preston. Brady actually spent a season of his formative career with Preston Grasshoppers prior to becoming a Premiership regular with Sale and Leicester and is signed up to another year in the National Leagues with Sale FC. In Director of Rugby Jonathan Keep’s plans throughout the 2019/20 season, Brady believes that the only way is up for the side.

“I had a really good year with them and I think we didn’t quite achieve what we should have,” Brady said. “We are an underachieving team with what we have, which is a shame. I am excited for this year and we have got a good squad. We started pre-season a few weeks ago, but I am enjoying my rugby again which is the important thing.”