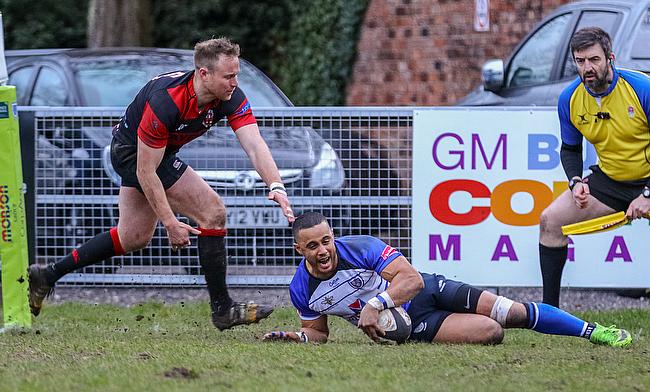 Jonathan Keep’s side scored six tries against the Midlands club at the CorpAcq Stadium and the win for Sale means they are now nine points clear of the bottom three.

As for Moseley, they are seven points shy of safety but all of their rivals lost in Round 23.

Bottom of the table Loughborough Students were beaten by Rosslyn Park and a spirited Caldy side fell to Blackheath while Esher suffered a setback at home against league leaders Old Elthamians.

OEs now remain five points clear at the summit, but second-placed Ampthill and District kept the pressure on following their win over Bishop’s Stortford.

The A’s also have a game in hand to come on Saturday against Caldy and victory at Dillingham Park would move the Bedfordshire club level on points with OEs.

Old Elthamians fought off a spirited Esher side to stay in control of top spot in National One following a bonus-point win.

George Perkins scored twice to put the visitors in front, but Esher hit back thanks to a close-range effort from Rhodri Tanner.

Joe Carlisle edged OEs further ahead, but the home side cut the lead to five points when Basil Strang darted over just before half-time.

Following the interval, Carlisle landed his second penalty but Esher reduced the deficit to 20-17 when they scored their second try of the afternoon.

However, with 10 minutes to go, Esher’s Charlie Gossington was shown a yellow card and the league leaders exploited the extra man. Dom Lespierre scored a brace as OEs once again wrapped up a late bonus-point victory.

Ampthill and District survived a second-half fightback from Bishop’s Stortford to seal a bonus-point victory as they kept up the pressure on leaders Old Elthamians.

Spencer Sutherland played a key role for his side as he scored on two occasions to help the A’s secure a crucial win in the title race.

Scores from Jon Kpoku and Sam Baker, as well as a penalty try, gave Ampthill a 19-9 advantage at half-time.

Sutherland’s first and a penalty from James Pritchard extended the lead, but scores from Manu Vunipola and Dec Caulfield brought Stortford right back into the contest.

Tom Banks had also landed four penalties for the visitors, but the away side had no answer to the decisive try of the match from Sutherland as he latched on to a grubber kick to clinch the win for Ampthill.

Jake Lloyd scored a hat-trick and Leo Fielding kicked 13 points as Blackheath battled to victory in a thriller against Caldy.

A penalty from Ben Jones made it 17-13 to the visitors and the four-point margin remained the same after Jack Daly and Royle exchanged tries before half-time.

However, Lloyd completed his hat-trick either side of a Jones penalty to put Blackheath in front and further scores from James Catt and Harry Bate ultimately sealed the win for James Shanahan’s side.

Caldy did complete proceedings as John Collister dotted down to secure a potentially crucial bonus-point as the Wirral outfit now sit seven points clear of the drop zone.

Tries from Dan Laventure, Stewart Maguire and Karl Gibson helped Park into a 19-3 half-time lead in the Midlands.

Tim Bitirim (2) and Jack Moates grabbed consolation tries for Loughborough, who are now 10 points from safety.

Plymouth Albion bounced back from their loss against Bishop’s Stortford as they beat Rotherham Titans at Brickfields.

Albion crossed twice in the first half through Jonathan Dawe and Jack Arnott while Rotherham replied via an Alex Dolly penalty and a try from the in-form Seb Nagle-Taylor.

An early score in the second period from David McGregor put Plymouth in control, but with 10 minutes to go, Nagle-Taylor set-up a tense finish as he dotted down.

However, Kieran Hallett’s side held on for their fifth consecutive home victory while Rotherham’s promotion hopes have all but come to an end.

Darlington Mowden Park moved up to sixth place in National One with a bonus-point victory over Chinnor.

First-half tries from Chris McTurk, Jake Brady and Warren Seals helped give DMP a 19-14 lead, with Matt Hodson and Ben Manning going over for Chinnor.

The visitors increased their advantage after the break and tries from Talite Vaioleti and Oliver Walker made it 31-14.

Chinnor were spirited and cut DMP’s lead to just five points when Craig Holland and Hodson both crossed to set up a nervy final seven minutes, however, DMP held on to leapfrog their hosts in the table.

A try in the final 10 minutes from Alex Rayment gave Cambridge a vital win against Cinderford at Volac Park.

With the hosts trailing for the majority of the second-half, Rayment was able to barge his way over the line to score.

Liam Hemming kicked two penalties for Cinderford, while Ben Penfold landed one for the home side.

The victory for Cambridge has lifted them 10 points clear of the relegation places as we head into the final two months of the season.

Sale led 20-13 at half-time after Kieran Wilkson had scored inside the first minute before Bingham and Matt Bradley touched down for the hosts.

Moseley’s points came from the boot of James Williams, as well as a try via Ryan Roach, and the visitors were able to go in front after the break.

Another penalty from Williams was swiftly followed by an Alex Hearle try as the on-loan Worcester Warriors man scampered over.

The pendulum then swung back towards Sale as Tom Ailes and Adam Aigbokhae both crossed to make it 32-23 to the home side.

Moseley once again hit back as Louis Roach dotted down with nine minutes remaining, but the decisive moment came from Bingham as his second score of the afternoon sealed the win for Jonathan Keep’s men.